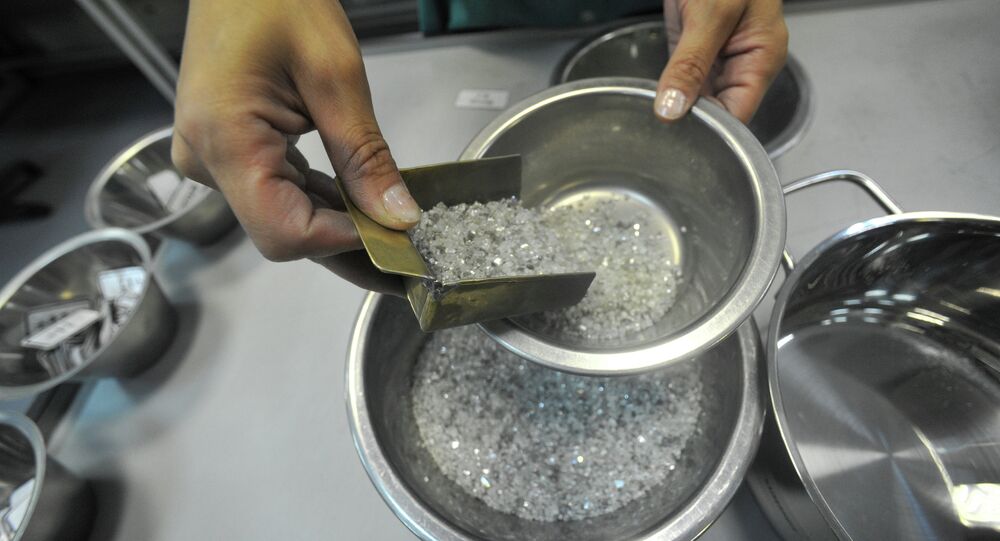 Moody's stated that Russian diamond producer Alrosa’s credit rating was bumped up a notch to Ba2 from Ba3 on a positive reassessment of the company’s financial outlook.

WASHINGTON (Sputnik) — Russian diamond producer Alrosa’s credit rating was bumped up a notch to Ba2 from Ba3 on a positive reassessment of the company’s financial outlook, the credit agency Moody's Investors Service said in a statement.

“Following a reassessment of the credit profile, today's rating action reflects Moody's view that despite of the inherent risks that remain in the Russian market, Alrosa has continued to perform in line with Moody's guidance for a positive rating action, and to maintain a solid liquidity profile,” Moody’s said on Tuesday.

Alrosa, the world’s largest diamond producer, accounts for some 28 percent of global diamond output. The Russian government is the principal shareholder in the company.

Alrosa was previously downgraded along with 45 other non-financial corporate ratings of Russian companies and placed under review.

A Ba2 rating means the corporate debt is still speculative at two notches below investment grade.

Moody’s said diamond prices are stronger than expected while demand remains robust. The company’s liquidity has improved and Alrosa could benefit from the ruble’s devaluation.

Approximately 90 percent of Alrosa’s revenue is in foreign currency while locally denominated expenditures are between 10 and 20 percent, allowing the company to benefit from a lower ruble and show robust cash flow.

Moody’s also cited the company’s large stockpile of diamonds and global market share of 28 percent as warranting an upgrade.