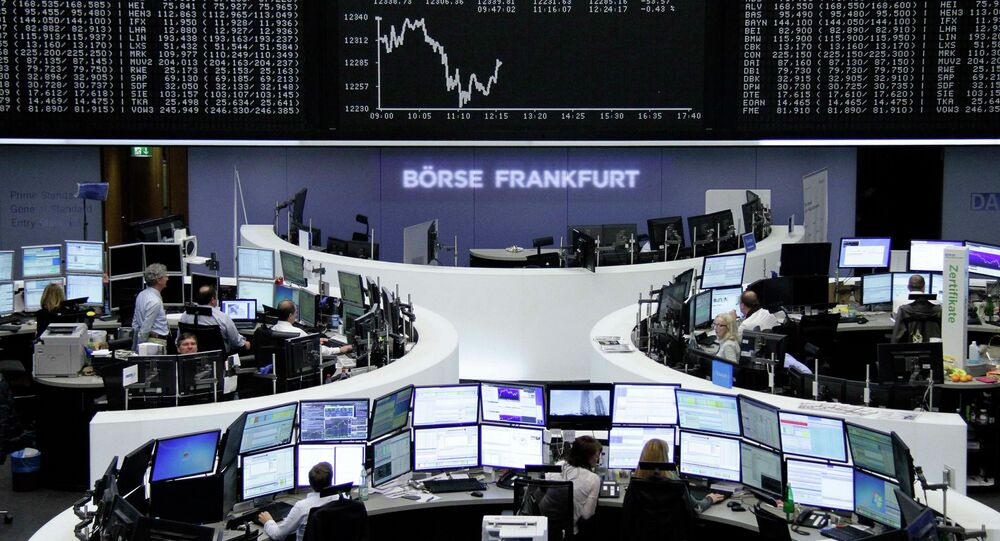 Global Stocks Mixed Amidst Growing Concern of US Corporate Earnings

A stronger US dollar is disrupting the fragile balance in international economic relations, hitting a broad range of operations, from America’s own offshore business of multinational firms, to mainland China’s regulative practices, while driving robust growth in Japan and Europe.

Kristian Rouz — Worldwide trading in stock markets in late Monday — early Tuesday sessions showcased the negative effects of the ongoing ‘currency war', led by Japan and the Eurozone on the monetary easing side, and the US, leaning toward a further gradual tightening. A stronger dollar is weighing on the offshore profits of the US-based multinationals, while the weaker yen and euro have greatly benefitted the Japanese and European export-oriented industries.

Consequently, Wall Street suffered a retreat across several sectors, the pessimism deepened as the US oil production is shrinking due to an insufficiently expensive fuel. Japan and several European markets are on the rise, while mainland China is facing a yet another complication of its ravaged economic model: the Communist nation's junk bonds rose to their highest since the pre-crisis 2007.

Alexei Filippov
Global Markets Advance on Capital Gains and Regional Policy Stimulus
Monday trading on Wall Street ended in the red due to the risen concern of corporate profits possibly falling more than anticipated as a result of the stronger dollar. Among the American-based multinationals due to report this week are General Electric, whose equities slid 3.1% after Friday's buyout, Johnson & Johnson, who lost 1.5% on their stock. Among other companies to report earnings are major banks, including Wells Fargo, JP Morgan Chase, as well as the chip-maker, Intel Co.

The S&P 500 Index fell 0.46%, having posted losses in 9 out of 10 sectors. S&P Industrials retreated the most, some 1.1% as the overseas manufacturing and assembly divisions of the US firms are losing their economic viability. The US Fed monetary policy is obviously pushing the American businesses toward a quicker reshoring of their facilities. During Q1, US corporate earnings fell an annualized 2.9% as the US dollar has been gaining value. Bloomberg's US Dollar Index rose over 20 points since 14 April 2014, having advanced from 78.9060 to its current 99.45 points, hitting its multi-year highest of 100.39 on 13 March.

The dollar went on strengthening overnight, adding 0.1% against its major peers. The Dow Index fell 0.45%, Nasdaq shed 0.15%, having traded at over 5,000 points for a short period of time, hitting its all-time record high.

Tuesday trading in Asia-Pacific saw most stocks hovering near their seven-year highs, with gains in Japan, benefitting from the stronger dollar. Tech equities retreated mostly, while consumer shares gained momentum.

The MSCI Asia-Pacific Index rose just less than 0.1%, advancing as much as 0.4% during the day. In Japan, Nikkei 225 was flat as investors are cautious, though moderately optimistic, ahead of the earnings season. The broader Topix Index added 0.3% as a stronger dollar and weak corporate profits in the US are promising greater earnings to Japanese firms.

In Hong Kong, stocks suffered some major losses Tuesday, due to mainland concerns. Tencent Holdings led the retreat, dropping 5.5% after it was revealed that the firm's head, Pony Ma, sold 200 mln shares of Tencent for some HK$3.22 bln ($420 mln) last week. Asian stocks are overbought due to a buoyant rally seen in the last nine days, that is why investors tend to sell as soon as even insignificant negative tendencies come up.

Korea's Kospi Index added 0.6% due to a stronger US dollar as well. Down under, New Zealand's NZX 50 advanced 0.5% thanks to tighter monetary policies here, while the ASX Index in Australia, selling a lot of commodities to mainland China, retreated 0.2%.

There have been indications that some investment money might be leaving the US ahead of the Fed hike in the base interest rate, to buy into Japan and Hong Kong, meaning even a slight retreat in stocks here will be followed by an aggressive buyout.

In mainland China, however, the systemic issues of the economy still persist, with central bank's reserves dropping a record amount due to massive market interventions, and junk bonds rising above the pre-crisis 2007 level, up to nearly a record level of 2004.

People's Bank of China (PBOC) reserves shrank by $113 bln to $3.73 trln during Q12015 in a third consecutive quarterly decline. The main reason for such massive PBOC interventions in a record capital flight — investment money get sucked out of China via the Stock Connect scheme through to Hong Kong. A stronger dollar is also a factor backing this trend. Availability of credit is declining, with the overall financing having shrunk to 1.18 trln renminbi in March as compared to the average 1.5 trln.

© Fotolia / Alexey Belikov
Time to Buy Into Russia as Ruble Becomes Best-Performing Major Currency
Simultaneously, credit quality is deteriorating, with junk bonds near their highest. The high-yielding (and thus very risky and volatile) Kaisa bonds, traded at $0.296 this January, skyrocketed to $0.696 this past Monday. According to data by Bank of America Merrill Lynch, an average high-yielding enterprise in mainland China earned only 2.7 times their interest paid in 2014, while having accumulated 35.5 times more loans than their operating capital. That said, the heavily-indebted and corrupt economy of mainland China is becoming an issue out of control of the nation's own monetary authority.

"We expect the flows to invest in Hong Kong from mainland investors to continue," Mandy Chan of HSBC Global Asset Management said Tuesday.

In Europe, stocks rallied on Tuesday, as a weakening euro is providing a major boost to the regional industries. There have been some optimistic news of major deals concluded in the corporate sector, adding to investors' bullishness.

The FTSEurofirst Index of major European shares hits its highest since year 2000 after the Finnish tech giant Nokia announced they would align with the French Alcatel, forming a joint enterprise worth $42 bln. Shares of Alcatel-Lucent jumped 9.7%. However, as investors had only anticipated Nokia acquiring part of Alcatel networks rather than the entire firm, the former's shares slumped 6.3%. Consequently, the FTSEurofirst 300 was 0.3% in the red at the close.

The euro slid 0.2% to $1.0546. In commodities, crude rose as US oil production is anticipated to post its first monthly decline, while global economic growth is gaining momentum, suggesting a revived demand for energy.