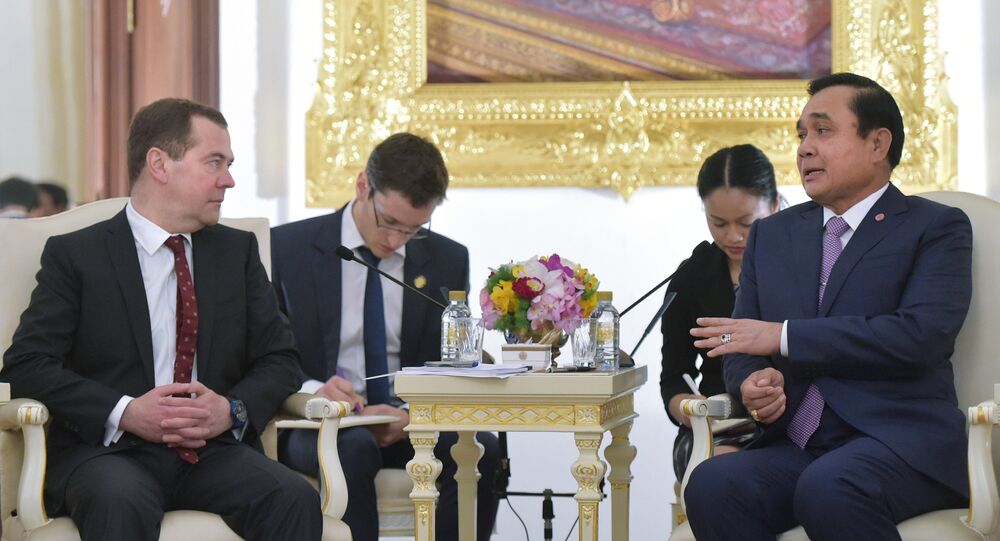 Russian Prime Minister Dmitry Medvedev wants to have a free-trade zone between Thailand and the Eurasian Economic Union (EEU). The prime minister said now everything depends on Thailand's decision.

BANGKOK (Sputnik) — A free trade zone between Thailand and the Eurasian Economic Union (EEU) may be established following a similar move with Vietnam, Russian Prime Minister Dmitry Medvedev said Wednesday during his visit to Thailand.

“Today I suggested to my counterpart [Thai Prime Minister Prayut Chan-o-cha]… to think about the possibility of creating a free trade zone with the Eurasian Economic Union along the same lines as we are about to do with Vietnam,” Medvedev said in an interview with the Thai media corporation Nation.

“We are developing our Far East… We have come up with a legal construct which we refer to as "priority development area." In fact, these are preferential zones with special taxation arrangements, simplified customs regulations and expedited land transfer procedures,” Medvedev said, adding that this might be of interest to Russia's Thai partners.

The EEU, established on January 1, 2015 to aid economic integration, aims to achieve the free flow of goods, services, capital and labor across its member countries.

On Monday, Vietnamese Prime Minister Nguyen Tan Dung said that Hanoi plans to sign an agreement with the Eurasian Economic Union (EEU) on the establishment of a free trade zone by the middle of year 2015.

The proposed free trade agreement with Vietnam will be the first of a kind for the EEU.

Medvedev Says Time for Russia, Vietnam to Use National Currencies in Trade