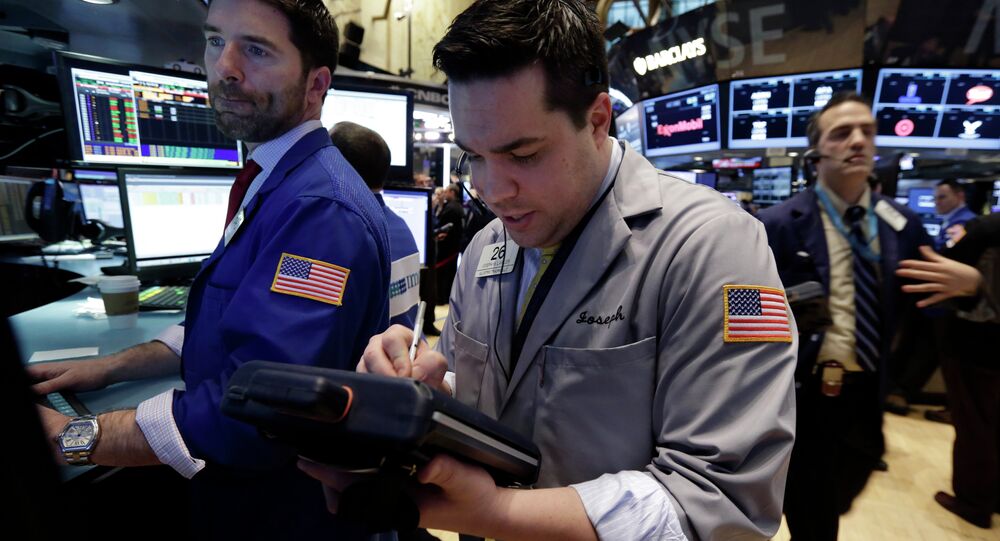 Several Fed officials reassured investors of the coming monetary tightening, erasing the negative effects of last week’s soft US data and triggering a rally in equities around the globe.

Kristian Rouz — Equity markets rallied worldwide during late Monday-early Tuesday trading after Dennis Lockhart, head of Atlanta, GA Fed, spoke out on the anticipated Fed raise in its base interest rate as coming after the next two policy meetings, meaning the new wave of monetary tightening would come within the July-September timespan. Lockhart's comments came as the increasingly data-sensitive stock markets had been leaning in a bearish direction after last week's soft US jobs report. This time around, the regulator's rhetoric has proven a significant boost to the market once again, not only in America, but beyond. Consequently, the dollar erased last week's losses Tuesday in Asia-Pacific trading, while oil retreated slightly.

Asia-Pacific Tuesday trading ended in the green, with shares boosted by the strong performance of US equities on Monday due to the aforementioned Fed policy commentary.

© AFP 2021 / YASSER AL-ZAYYAT
Mideast Markets Rally as Investors Welcome Iranian ‘Nuclear Deal'
The MSCI's Asia-Pacific Index rose 0.2%, led by tech and consumer sector equities. The technology sector was also the driving force behind Wall Street's gains during Monday trading in New York, with the S&P 500 Index having rallied 0.7%. Besides Mr. Lockhart's policy remarks, another factor in investors' optimism was a commentary by New York Fed President William C. Dudley, who said the looming Fed tightening, once arrived, will be characterized by ‘shallow' interest rate hikes. That means, yields on US Treasuries will not rise as quickly as they are poised to in case of more significant one-time rate hikes, rendering the overall US economy more stable.

Yet another factor in Wall Street's bullishness this past Monday was the Purchasing Managers Index (PMI) report by Markit, indicating the US services sector expanded in March at its fastest since August. The US services PMI stood at 59.2 in March compared to 57.1 in February (readings below 50 indicate recession, while anything above that is growth), suggesting a robust build-up, led by increased consumer spending. The actual figure of 59.2 has also surpassed the preliminary PMI reading for March, which stood at 58.6. Employment index for services also rose to 54.0 in March, up from 52.7 the previous month.

Japanese stocks gained momentum on US optimism, with energy sector advancing the most. Inpex Corp., Japan's prominent oil logistics and processing enterprise, rose 4.4% after oil futures added 6% in the US due to an increased demand from refineries (crude price retreated 1% later). Across other sectors, strong corporate data and firm credit ratings pushed tech and pharmaceutical companies up, resulting in the broader Topix Index rising 1.1% at the end of the day. The Nikkei 225 Index rose 1.3%, while the yen stood at 119.57 against the greenback, retreating 0.5%, a positive signal for Asian exporters.

In Australia, the local currency advanced 1.3% against the US dollar to $0.7686, with equities rising some 0.4% on average. The Reserve Bank of Australia (RBA) decided to keep its stimulus in place, deciding to not yet hike its cash rate, currently at 2.25%. Australia's main export, iron ore, has been depreciating recently, along with other commodities, hitting the nation's balance of payments. The RBA has not ruled out a possible future monetary easing.

Shares in Indonesia, Malaysia and Thailand rallied as well. Mainland China's stocks posted a new seven-year high ahead of earnings season, investors expect the weak data will push the People's Bank of China close to implementing a full-scale stimulus.

© AP Photo / Alan Diaz, File
US Jobs Growth Stalled, Prompting Retreat in Futures; Dollar Goes Down
Also on Tuesday, some reports suggested the British economy expanded at a faster pace in Q1, than it was anticipated, a positive sign for the markets. The Confederation of British Industry (CBI) said the UK's economy rose an annualized 0.7% in Q1, while official figures published last week showed the British economy grew 0.6% in Q4 2014. That means, the growth is gaining momentum in the UK, which is particularly important given the absence of a solid stimulus program in place. A stronger pound, however, prevents UK growth from picking up pace beyond the current estimates.

In oil prices, Brent crude dropped 1% Tuesday after Goldman Sachs reported that US oil output might suffer a visible decline only in case the cheaper oil lasts for over several months. Brent now stands at $57.49/bbl, while US oil futures with May delivery dropped to $51.70/bbl. According to Goldman, if oil costs $40/bbl, US output would slide some 350,000 bpd in May-September, however, even a decreased US production would not allow for oil price to rise above $65/bbl in 2016.

The US Energy Information Administration will publish its data Wednesday, but from what is already known, US oil inventories are still expanding, with Cushing stocks adding some 169,000 barrels in the week ending on 3 April. The US oil market is becoming more balanced, however, such a small rise in inventories might be a consequence of storages and refineries being filled with oil over 90% their capacity.