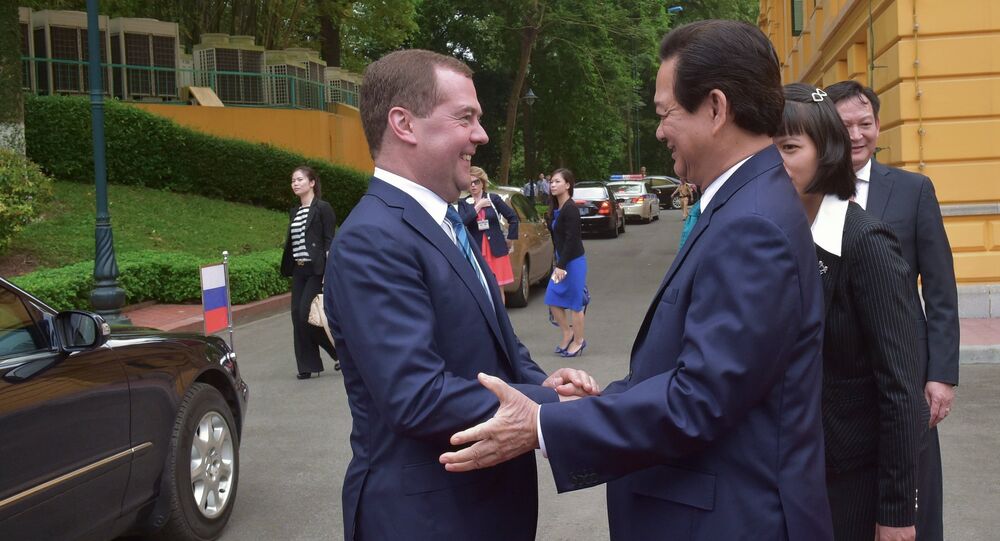 Russian Prime Minister said that all of the principle aspects in creating a free trade zone between the countries of the Eurasian Economic Union and Vietnam have been agreed.

© Sputnik / Ekaterina Shtukina
Vietnam Ready to Set Up Free Trade Area with Russia-led Economic Bloc
HANOI (Sputnik) – All of the principle aspects in creating a free trade zone between the countries of the Eurasian Economic Union and Vietnam have been agreed, Russian Prime Minister Dmitry Medvedev said Monday.

“Almost all of the parameters have been agreed, and the preparation of documents have reached the final stage," Medvedev said after negotiations in Vietnam's capital of Hanoi.

Medvedev stated that a contract will soon be signed between Moscow and Hanoi.

"I hope that we will soon move on to signing the agreement," Medvedev added.

Hanoi plans to sign an agreement with the Eurasian Economic Union on a free trade zone by the middle of this year, Vietnamese Prime Minister Nguyễn Tấn Dũng said.

“Our goods turnover has dropped a bit lately and in order to improve the situation, we decided to instruct our ministers, businessmen, and organs from both sides to take measures on signing an agreement soon on a free trade zone between Vietnam and the Eurasian Economic Union in the first half of 2015,” Dũng said in a joint statement with Russian Prime Minister Dmitry Medvedev.

Dũng added that Vietnam is striving to increase its goods turnover with Russia to $10 billion by 2020.

During the first day of Dmitry Medvedev's visit to Vietnam, the Russian and Vietnamese sides have signed several agreements on energy cooperation.

Among the documents signed Monday is a memorandum on mutual understanding between Russia’s Gazprom and the Vietnam Oil and Gas Corporation. Gazprom’s chairman of the board of directors and the head of the Vietnamese corporation also signed a document on the main conditions of the purchase of a 49 percent share in Binh Son Refining and Petrochemical Company.

Russian-Vietnamese talks, with the participation of the Russian prime minister and his Vietnamese counterpart Nguyen Tan Dung, began in Hanoi Monday. Opening the meeting, Medvedev expressed hope that the unprecedentedly high level of trust that Russia and Vietnam have for each other will allow the two countries to widen their cooperation in many key spheres, including the energy sector.

Russia is hoping for a general framework agreement on the construction of a nuclear energy facility as well as the creation of a nuclear science and technology center in Vietnam, Russia Prime Minister said.

“We are continuing our cooperation in nuclear energy and have discussed the current situation of business,” Medvedev said after negotiations in Vietnam’s capital of Hanoi.

Medvedev added that an overall framework agreement would soon be signed.

“We hope that we will soon sign a general framework agreement where the stages of realizing the project are shown,” Medvedev added.