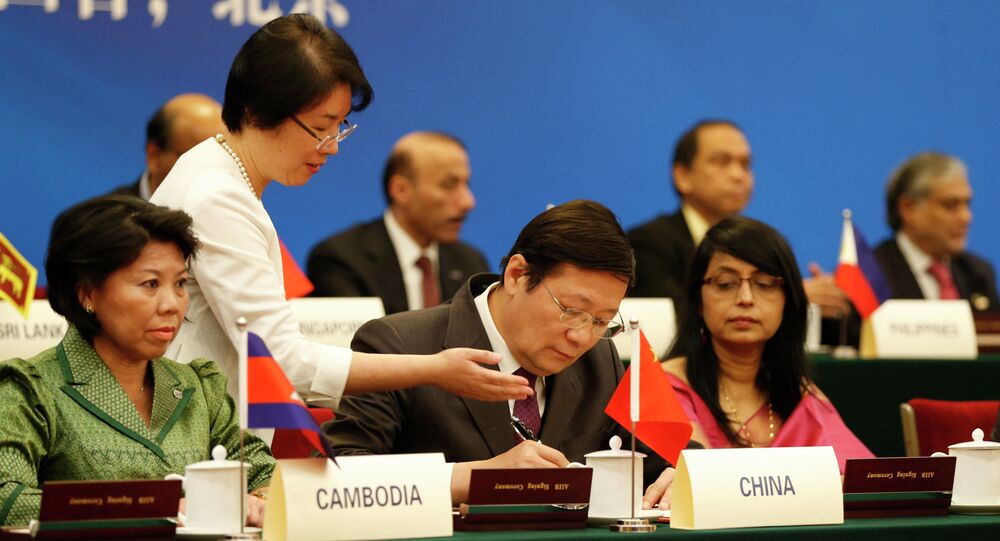 The fact that America's longstanding allies rushed to join China's Asian Infrastructure Investment Bank (AIIB), despite Washington's efforts to discourage them, clearly indicates that the US' influence over its allies has limits, Greg Moore noted.

© AFP 2020 / Takaki Yajima /POOL
47 Countries to Join China-Led Development Bank
A continued Washington policy aimed at isolating Beijing over the AIIB has only served to isolate the United States, noted Greg Moore, an Associate Professor of International Relations at the School of Public Affairs at Zhejiang University (Hangzhou, China), urging Washington to sign on to the AIIB as a founding member.

The expert emphasized the fact that US’ longstanding allies rushed to join China's AIIB despite open displeasure expressed by Washington. It has clearly demonstrated that the US’ influence over its allies has limits, Mr. Moore remarked.

"It is clear the US policy of attempting to isolate the Chinese in their establishment of the bank, and to encourage US allies not to join, has failed, and it appears certain that the bank will move forward with or without the United States' blessing," the expert noted. However, according to Greg Moore, the US should grab the chance to join China's AIIB itself.

© Sputnik / Vitaly Podvitski
Bully in a China Shop
A decision to sign on to the AIIB would allow Washington to cooperate with its allies, shaping the new institution and holding it accountable to "global standards," the expert stressed, adding that the US "would truly look like a stick in the mud by staying out."

Moreover, by ignoring the China-led bank, the US risks damaging relations with Beijing, Greg Moore noted. Washington would obtain better leverage by being "in the bank" than by staying "outside it," he said.

However, citing prominent American experts Jacob Joseph "Jack" Lew and Daniel Drezner, Greg Moore pointed out that the United States should have bolstered reforming of the Bretton Woods monetary management system earlier: in that case maybe there would have been no market for the AIIB, or at least less support for its launching.

China's Asian Infrastructure Investment Bank is an international financial institution. The AIIB initiative had been announced by Chinese President Xi Jinping and Premier Li Keqiang in October 2013, during a series of visits to Southeast Asian countries.

Aimed to promote 'interconnectivity and economic integration in the region' the bank has already brought together around 47 countries.

The UK, Germany, France, Italy, Switzerland, Turkey, South Korea have announced their plans to join the Beijing initiative. Many international experts consider the bank a potential competitor to the International Monetary Fund (IMF) and the World Bank.

Snubbing US, South Korea Decides to Be a Founding Member in China’s AIIB