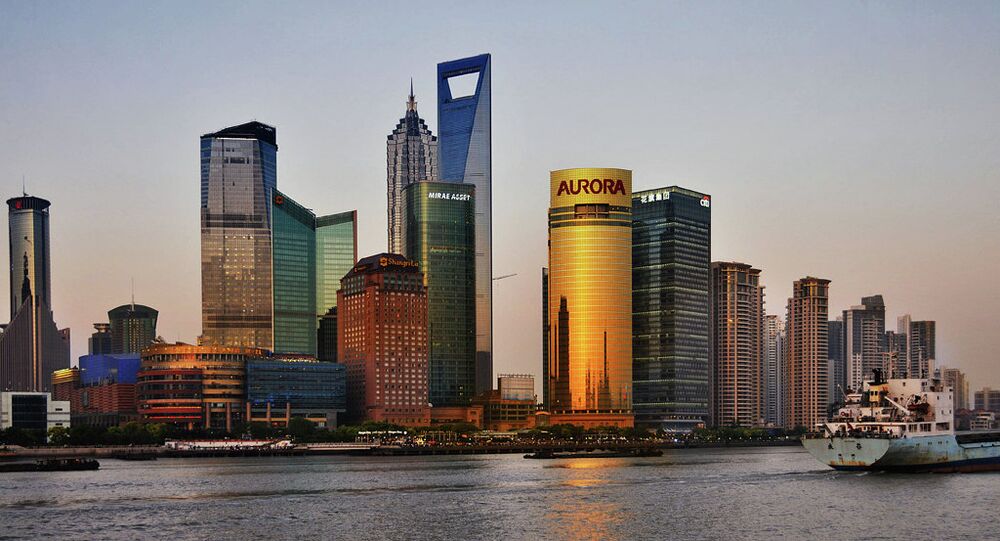 Mainland China could soon implement a full-scale economic stimulus due to the threats of deflation and stagnation, adding to the piles of cash being printed by Japanese and European mints, rendering monetary equivalent less valuable and investment less powerful across the globe.

Kristian Rouz – People’s Bank of China (PBOC) governor Zhou Xiaochuan, speaking at a forum of the nation’s high-ranking officials and top businesspersons on the Chinese island of Hainan in Sunday, admitted the Communist nation is falling into the mire of deflation at a faster pace than might be expected.

© Sputnik / Sergey Guneev
Boosting Bilateral Ties: Russia Vows to Join Chinese-led Development Bank
Coupled with the dramatic slowdown in the nation’s real economy, the threat of deflation might prompt the Chinese central bank to implement a full-scale stimulus, also known as ‘quantitative easing’ or QE, in the nearest future. Despite the fact that stock markets would eagerly welcome such a scenario, the Chinese QE, coming against the background of similar policies in Europe and Japan, might have dire effects on the global economic outlook, significantly impairing living standards all across the globe.

Despite this, Beijing has undertaken several limited-effect policies of monetary easing, such as allowing more renminbi-denominated liquidity in the economy by lowering the reserve ratio requirements (RRRs) for certain banks, the deflatory pressure has eased only somewhat with prices at the factory gate still declining and the overall economy slowing far below the demographically-dictated minimum growth threshold of 8%. The PBOC even cut its base interest rate twice since November, but, as the economy weakens further, full-scale QE is looming as the only solution

"Inflation in China is also declining. We need to have vigilance if this can go further to reach some sort of deflation or not," Zhou said, rendering the nation’s top policymakers considering further monetary easing moves, necessary to fend off the deflation and spur the overall economy.

Zhou’s comments suggest that China is now moving into the territory of a constant near-deflation and a stagnant economy  where Japan had been for nearly 20 years, from the early 1990s to the early 2010s, until ‘Abenomics’ allowed  for the island nation’s gradual return to a normal growth as a post-industrial society.

As the Eurozone and Japan are increasing the volume and pace of their QE programmes, and the US is only gradually exiting the era of their own ultra-easy monetary policy, the addition of China to the ‘QE club’ entails serious risks for the global economy. From the very advent of the global economic meltdown in 2008 up to this point, China has been doing well economy-wise through excessive borrowing, having accumulated a total debt of 280% its GDP, as well as having nurtured a vast and uncontrollable sphere of shadow banking and grey economic activity. Now this debt-fueled model does not seem to work as global demand for the made-in-China goods has shrunk to the point where a lot of output is piled up at the factory gate with an ever-fading price tag.

A structural reform, aimed at attracting investment money and technology from outside the mainland might have become an answer for China, but such a reform, also labeled as ‘liberalization’ by its opponents, would jeopardize the political dominance of the Communists in Beijing, something they can’t have happening to them. Nonetheless, the PBOC head Zhou remarked that a certain liberalization is a must, namely a liberalization in the interest rate. Deposit rates might be freed of the excessive governmental supervision within a year or two, he said. However, there is no timetable possible as the totalitarian regime cares the most about its own survival more than anything else, even in dire economic environment.

That said, QE is a perfect solution for the Communists in Beijing. Monetary Easing would spur inflation by devaluing the population’s real income, something America had witnessed in 2008-2013 and what Japan and the Eurozone might have experienced had they not been the huge exporters of industrial and hi-tech goods that they are.

© Flickr / Republic of Korea
Snubbing US, South Korea Decides to Be a Founding Member in China’s AIIB
Given that mainland China is the world’s second-biggest economy and also the one of the greatest global debtors, a vicious round of money-printing might disrupt the existing balance between the world’s monetary-conscious economies (the US, the UK, Switzerland) and the easing-reliant economies (the Eurozone, Japan, Australia). With China aboard, the easing-reliant part of the equation will prevail, resulting in the global economy producing amounts of money liquidity far exceeding the investment-absorbing capacity of the more healthier economies. Consequently, a lot of the non-backed by the real growth money will be kicked back and forth, ultimately impairing the cost of human labour and economic ventures.

“The long-term consequences of global QE are likely to permanently impair living standards for generations to come while creating a false illusion of reviving prosperity,” the recent Bank of America Merrill Lynch implies. According to the BofA, estimated, global economic growth might dip into negative in 2015 for the first time since the recession of 2009 due to the excessive worldwide use of unorthodox monetary policies. Encouraged by America’s successful QE experience, policymakers in Brussels and Tokyo have been eager to pump more money into their own economic systems, but add China here, and everything is deteriorating.

Unless the monetary-conscious side of the global equation in joined by a certain global economic heavyweight, like Brazil, or Russia, or – which is a most likely prospect, ‘the next big thing’ – India.