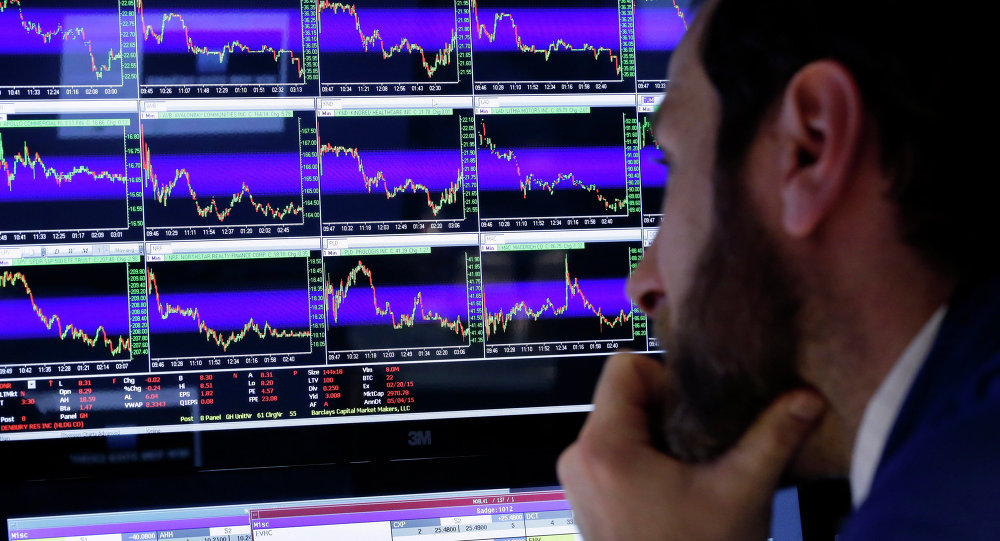 Gulf stocks, driven by the dynamics in global oil prices and local political irritants, were up and down Sunday, as the Yemeni civil war and cheaper energy are weighing on the markets, while the reassuring political rhetoric of the Saudis has some positive effects.

Kristian Rouz — Arab world markets fluctuated between the red and the green in a highly volatile trading session Sunday as the ongoing war in Yemen is perceived as a threat to stability, exacerbating the political and sectarian tensions in the region, while global oil prices rolled back. On the positive side, however, Saudi stocks posted their biggest gains in six week after the king pledged to ensure Yemen will remain a stable state.

© AP Photo / Richard Drew
US Stocks End Their Losing Streak as Yellen Vows Rate Hikes
Dubai stock market was flat during Sunday's trading due to the investors' concern with the ongoing Saudi military venture in Yemen and the ongoing decline in oil prices. The DFM General Index added 0.8% at the close after losing nearly 0.7% during the day. Trading volumes were thin, however, with only one fifth the amount of contracts concluded of the last year's daily average.

Saudi Arabian stocks jumped as investors seemed reassured by the king's statement, claiming the Saudi military operation in Yemen will contribute to the nation's stability. The Tadawul All Share Index rose 2.2%, the biggest daily increase since mid-February. Qatar's QE Index also posted gains, advancing as much as 1%, ending its three-day retreat.

Saudi king Salman, speaking before the gathering of the Arab world leaders, stressed the nation will continue its military operation against the Houthi organization in Yemen until stability is fully restored under the nation's legitimate government. Despite starting as a purely sectarian-motivated local skirmish, a push by the Sunni Saudi Arabia and the Sunni-led Yemeni government against the Shi'ite Houthis might irritate Shi'ite Iran, sympathetic towards the Houthis. But at this point the risks of the conflict's escalation are minimal as Iran is more interested in concluding a nuclear deal with the world's major powers, allowing Tehran to export its oil to the global market.

Thus, the oil prices are generally seen as declining in the short-to-medium term. Brent crude declined 4.7% to $56.41/bbl.

However, the Saudi stock market does not seem to be concerned much with the future of the oil price, which might seem weird as the nation is widely recognized as the principal global supplier of crude oil. The fact of the matter is that recently Saudi Arabia has been consuming more crude in the domestic market, as its refining industry is on the rise.

© AP Photo / Michael Probst
Global Stocks Mixed With Dollar Up, Oil Down Ahead of Yellen’s Speech
As observed in a recent study by the Baker Institute for Public Policy, Rice University in the US, Saudi Arabia is gradually transforming its economy from a crude oil dependent commodity-based model towards the more industrialized petroleum products-exporting state.  That said, Riyadh may be losing its once total control of the global crude price, instead ensuring a more stable economic development at home.

At the same time, Dubai stocks have been increasingly volatile recently, driven mainly by the oil prices concerns. The eruption of a full-scale war in Yemen sent the DFM into a deep plunge early this past week, while the recent political statements caused an unexpectedly buoyant buyout in equities. The reason behind such sharp fluctuations is a structural weakness in the nation's real economy, being an insufficiently diversified petrocracy. Short-term investment is dominating Dubai, which is also a concern as the ongoing depreciation in crude oil might trigger a flight in investment capital and an overall economic downturn.