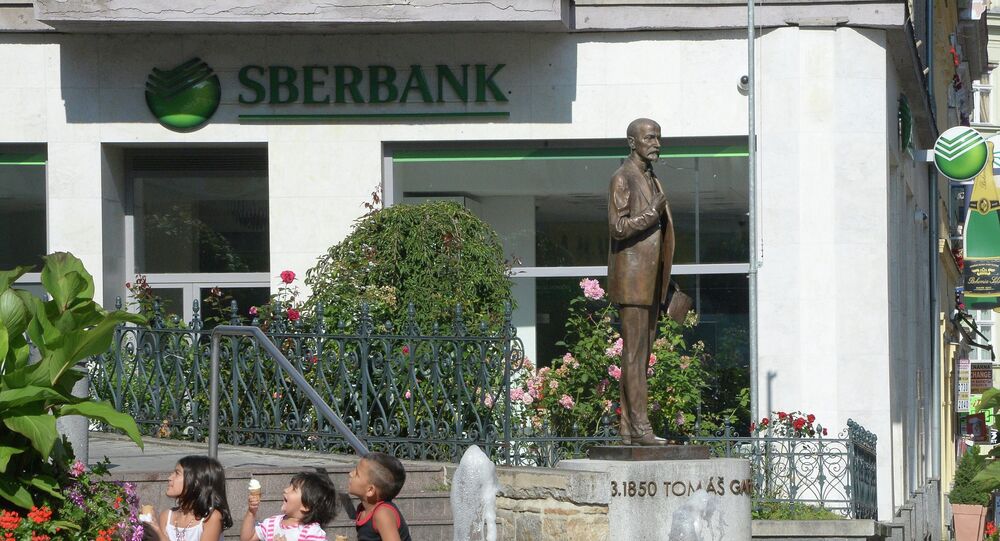 Experts speaking to Radio Praha about Sberbank Czech Republic, a European subsidiary of the Russian banking giant, explained that contrary to rumors about the bank's imminent closure due to the expansion of EU sanctions against Russia, the bank is feeling fine and has big plans for expansion in 2015.

Speaking to Radio Praha about the future prospects for Sberbank Czech Republic amid rumors that it was set for closure due to EU sanctions, a representative of the bank and an independent financial analyst talked to the radio station about the real state of affairs in the bank.

Asked by the international broadcaster whether the rumors of the bank's imminent closure were true, Public Relations Director Radim Kovacs answered that they are not, given that "the sanctions do not affect our Czech Sberbank." The official noted that "as far as sanctions are concerned, we are a Czech bank, with a license from the Czech Central Bank. More than that, we are a part of the group Sberbank Europe AG, which has its central offices in Vienna. And this company is not in the list of entities sanctioned by the EU. This means that for us, access to the European capital markets is not in any way restricted."

Asked whether Sberbank Czech Republic has had to adjust in any way to the cooling of relations between Russia and the EU, to sanctions or to the onsetting economic crisis, Kovacs noted that ultimately, "Sberbank's strategy in the Czech Republic hasn't changed; our development continues. Last year we opened five new branches, and this year we are also planning on expanding. In 2014 our client base rose by a third, bringing the total to 70,000. This year we are aiming at achieving a client base of 100,000 people."

© Sputnik / Igor Russak
Two Sanctioned Russian Banks Have $640Mln in Frozen Assets in US
Kovacs noted that part of the reason for Sberbank's active growth in the Czech market is the liveliness it shows in working with foreign clients. "Everyone who has a place of residence and a source of income is eligible to use all the services we offer, without any limitations." The official added that the bank has a "Mortgage Without Borders" program aimed at those without a permanent residency status in the country, which "is designed for the purchase of real estate in the Czech Republic. It is enough for a person to show a proof of income" in his or her home country, "and we will set up a mortgage based on Czech laws." Noting that the bank is popular among Russians traveling, working or living in the Czech Republic, Kovacs noted that "at the moment, in four of our branches we have workers with knowledge of Russian, and we will only be expanding this service in the future."

Next, Radio Praha turned to economist and financial analyst Marketa Sichtarova, asking her what she thinks about the bank and its prospects on the Czech market. Sichtarova noted that while the bank is presently one of the smallest on the Czech market, "it is interesting for the types of accounts it offers, and its favorable interest rates." Sichtarova noted that Sberbank "attracts new clients with an intriguing and very aggressive marketing strategy," which works to explain why "some may think that the bank has a much more serious influence [in the Czech market] than it really does."

Do you think that the EU economic sanctions against Russia should be lifted, tightened or remain the same?
Voted: 1
All polls
Speaking of the bank's advantages, Sichtarova noted that many clients with accounts in large banks "use Sberbank as an alternative, parallel account. They do so in order to take advantage of its more favorable interest rates." The expert added that the level of enthusiasm with which Sberbank seeks out clients without permanent residency status also doubtlessly helps in their expansion: "On the one hand, it seems risky to provide mortgages to Russian citizens without permanent residency in the Czech Republic. Sanctions against Russia may affect the financial situation of many of its citizens, making them insolvent…On the other hand, the bank works in accordance with the law, and of course they consider their clients and the possible risks. I think that clients without permanent residency shouldn't pose any particular problem to the Czech Sberbank."

Asked whether she could recommend the bank to Czech clients, Sichtarova noted that the bank doubtlessly has the necessary capital, with no questions from the country's Central Bank. Furthermore, with regard to sanctions, "in this regard too I would be optimistic."

Two Sanctioned Russian Banks Have $640Mln in Frozen Assets in US