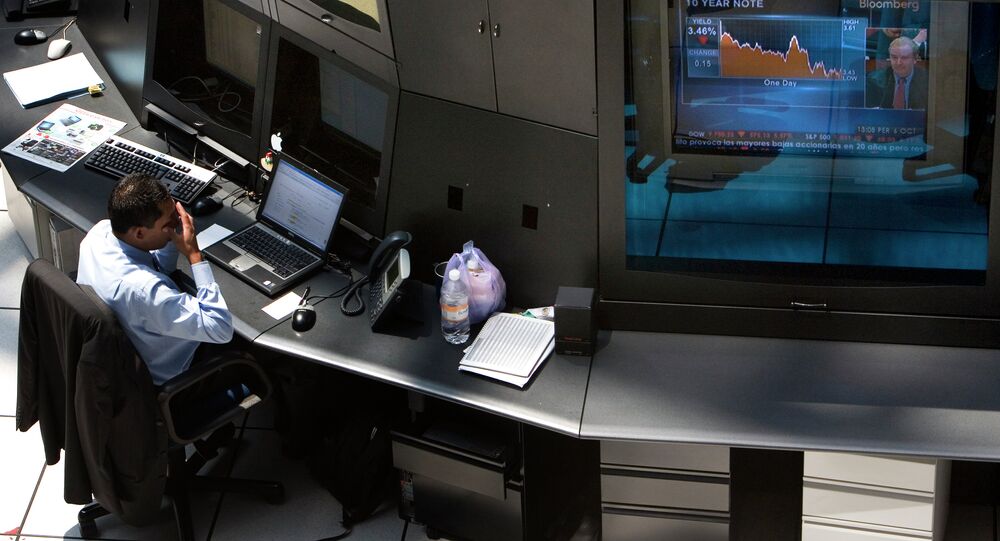 US Dollar Retreats, Global Markets Mostly Down on Fed Pessimism, Europe Up

Stocks in the US and most of Asia-Pacific are declining due to lack of driving force and the overall economic sluggishness and low demand for goods and services, while the Eurozone is buoyant and is seen as the hot place to be for an investor as the economy is expanding faster amidst the abundance of euro-denominated liquidity.

© AFP 2021 / JEWEL SAMAD
Market Review: Global Equities, Bonds Rush Towards All-Time Highs
Kristian Rouz — Stock markets declined worldwide as the Fed-inspired rally has all but played out, the Eurozone being the only bright spot in late-Tuesday to early-Friday trading. The US dollar is posting its worst dynamics since 2013 this week, while in Asia-Pacific investors' pessimism reached a scale similar to the pre-1998 levels with the dramatic devaluation of the Singapore dollar — the region's most important monetary equivalent, often traded instead of less liquid currencies in Asia-Pacific markets. Mainland China's renminbi has shown indirect signs of possible interventions made by People's Bank of China (PBOC), and crude oil, along with most commodities, continues to fall.

Thursday's trading on Wall Street ended in the red as energy and commodities sector suffered losses due to lower prices on raw materials. The dollar advanced during the day, coming to an eventual stall early on Friday. Most investors, having cheered yesterday after the Fed's decision to take a more cautious approach to the timing increase in the interest rate, are now wondering what happens next, hence the high level of uncertainty in the markets, weighing on most stocks' valuation.

The Dow slid 0.65%, the S&P 500 shed 0.49%, Nasdaq rose by 0.19% due to a surge in biotech equities. Stocks of Regeneron and Biogen added 2.9% and 1.3%, respectively. The current situation on Wall Street replicates the whole global economy as raw materials and more traditional industries are on a losing streak, while healthcare and tech enterprises are seen as having better prospects.

In Asia-Pacific, markets were mostly in the red early on Friday due to the previous day's losses on Wall Street. The MSCI Asia-Pacific advanced only 0.1% in Tokyo after hitting its highest since last September yesterday. Monetary authorities in Japan, Korea and Australia are continuing their unorthodox practices, providing ultra-cheap liquidity to their respective economies. Consequently, Australia's S&P/ASX 200 Index added 0.1%, Korea's Kospi was flat, and Japan's broader Topix index shed only 0.1%.

These three nations have been the best performers in the region as a new wave of unexpected economic pessimism has affected Asia-Pacific. Weak growth and a threat of deflation in the region's leading economies prompted investors to sell the Singapore dollar, which is a very alarming signal. The Singapore dollar is usually used as a benchmark indicator of economic sentiment in the region, not least because Singapore is the only Asian nation with a triple-A rating from S&P, Moody's and Fitch all at once.

"When the market was bullish on Asia and bearish the U.S. dollar, the Singapore dollar did exceptionally well." Now comes "a reversal of that trade," Rajeev de Mello of the Singapore-based Schroder Investment Management said.

© Sputnik
The Euro-Dollar Parity Coming to Reshuffle International Trade, Finance
Singapore's currency hit its 4.5-year low Friday, at S$1.3875 to the US dollar, while the mismatch between its spot rate and traders' betting has risen to its highest since 1998, at 0.0073, signaling the most likely further depreciation of the Singapore dollar. A low inflation, coupled with weak domestic demand are weighing on the Singapore's currency FX rate.

In Europe, nonetheless, shares are expected to advance Friday, with futures in England's FTSE, Germany's DAX and France's CAC 40, as well as the blue chip Stoxx 50 Indices all adding between 0.1% and 0.2%. Biotech and aerospace are the shares to watch, possibly performing best on Friday.

The US dollar is declining at the moment, as Bloomberg's Dollar Spot Index shed 0.2% in London early on Friday, while the euro is flat. Many investors are selling the greenback after having bought too much during and straight after the Fed policy meeting. What is happening now is a wave of cashing in on a one-time profitable investment.

The MSCI World Index added 2% this week, posting its first weekly gains since February, driven mainly by expansion in the Eurozone and in China. In commodities, the situation is still grim with Brent crude declining 0.1% to $54.38/bbl in London, and the American WTI crude losing 0.6% to $42.82, or 20% lower than this week's highest point.

In America, volumes of crude oil on the storage exceeded their record highs since 1982 this outgoing week. The US are now pumping some 9.42 mln bpd, which is 53,000 bpd more than a week ago, and also the highest since January 1983.