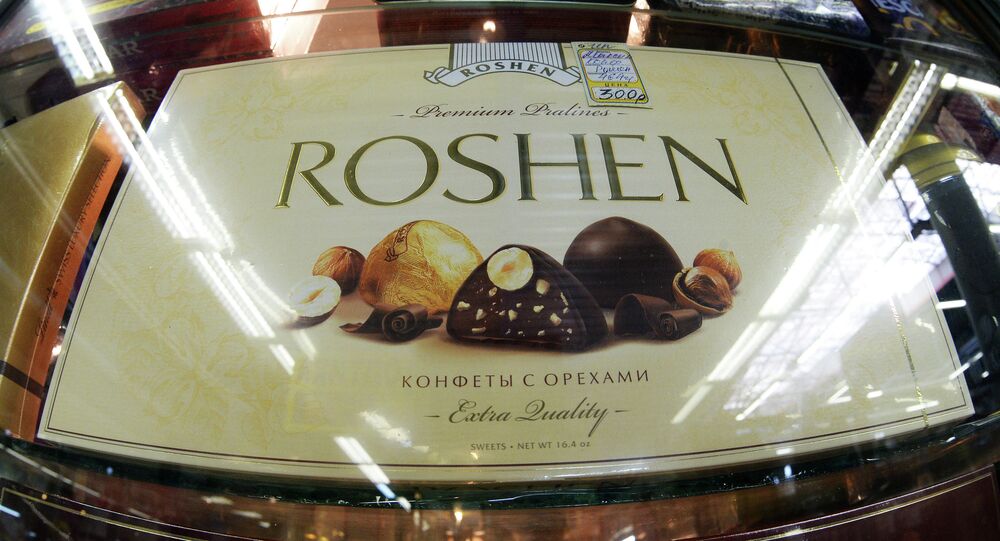 Ukrainian President Petro Poroshenko has accused Russian authorities of meddling in plans to sell the Lipetsk subsidiary of his Roshen chocolate empire.

In an interview for Ukrainian television channel 1+1 Friday night, Poroshenko noted that "at the moment, Russian authorities –and it would be better to ask [the management of] Roshen about this, are preventing the sale…In any case, it must be carried through to the end."

Poroshenko did not clarify how exactly Russian authorities were interfering, but he is presumed to have been speaking about the Lipetsk, Russia subsidiary of his chocolate empire.

Last month, the Lipetsk Public Chamber appealed to the Ukrainian President with an open letter proposing that he transfer control of the Lipetsk factory to its workers.

"We propose to you, Mr. President, to transfer the ownership of the factory to its workers; on its basis, we could create an enterprise that would allow employees to provide for a decent life for their families, and [help support] the 13,500 refugees from southeast Ukraine who have arrived in the Lipetsk region, deprived of their homes and loved ones in their own country."

© Sputnik / Alexander Vilf
Ukraine’s Poroshenko Accused Over Mafia Management Methods
British multinational investment banking company Rothschild is said to be involved in the sale of Roshen. Poroshenko noted that his duties as president, as well as the rules surrounding negotiations over the sale of the firm, prevent him from intervening directly in the negotiations process, which he says may take up to a year.

"My schedule –and I am at work for 18-20 hours a day, does not allow me to drop everything and go to the market and start bargaining," Poroshenko noted. The president added that "I'm sure Rothschild and others would be happy to provide all the necessary information, all the relevant information regarding the progression of the sales process."

Poroshenko complained that Ukraine's difficult economic situation, compounded by the war, make potential investors reluctant to invest. "Ukraine will see peace, and investors will come to Ukraine. While the war is going on, no one wants to come to Ukraine, including investors." Nevertheless, the President hinted that there were at least four potential buyers.

© Sputnik / Maksim Blinov
While Ukraine's Economy Crashes, It's Sweet Business for Poroshenko
Roshen, the biggest candy manufacturer in Ukraine and one of the largest confectionary companies in the world, has factories in the Ukrainian cities of Kiev, Vinnitsa, and Kremenchug, and in Klaipeda (Lithuania), Budapest (Hungary), and Lipetsk (Russia). Despite economic decline and the ongoing military conflict in eastern Ukraine, the $1.5 billion dollar company managed to stay in the green in 2014, netting a profit of $1.35 million, nearly nine times what it had brought in in 2013.

Poroshenko made a "solemn promise" nearly a year ago that he would sell his majority stake in the company as soon as he took office, but the process has dragged along since then. He repeated his promise in November, 2014, assuring German newspaper Bild that a deal to sell the company would be made soon.

Besides Roshen, Poroshenko also owns considerable bank and insurance company stock, shares in a shipbuilding company, a syrup-making factory and a fitness club, as well as Ukraine's Channel 5 television station, which he refuses to sell, arguing this would undermine national security.

‘Poroshenko’ is Getting Tossed From His Own Party