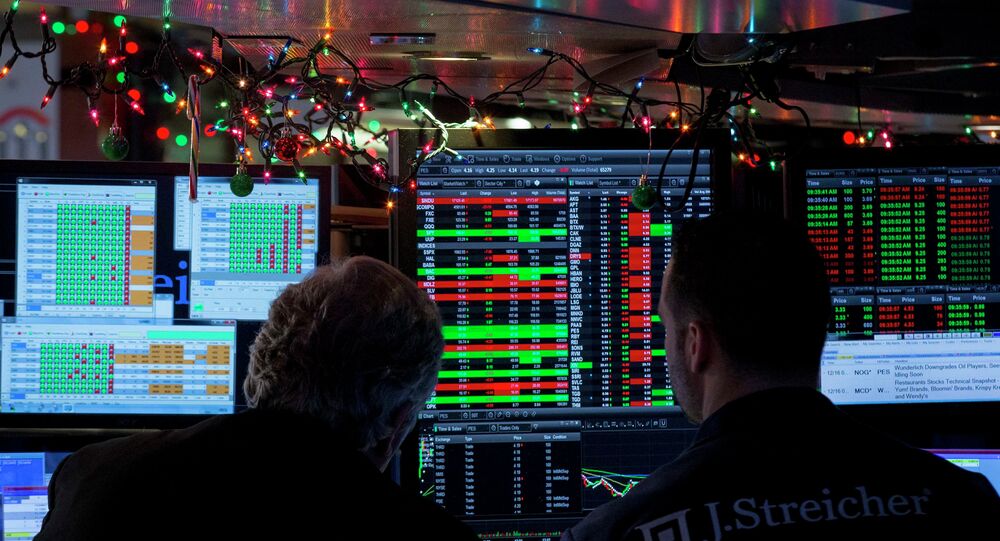 As the euro and the yen are depreciating, rendering the US less competitive in international trade, America must apply a brand new approach to economic policies to spur economic expansion and successfully competed with Europe and Japan.

© REUTERS / Brendan McDermid
Uncertainty in Stock Markets Fueled by Crude Fluctuations; Europe Extends Gains
Kristian Rouz – A currently wide-scale monetary stimulus in Japan and only a promise to launch a massive bond-buying program in the Eurozone, coupled with the outstanding performance of industrial manufacturers in both economies, might be an early indication that Brussels and Tokyo have finally found their way out of the deflation trap, holding them down for many years.

Meanwhile, in the US, inflation is slowing, as Fed chair Janet Yellen reported recently, threatening growth prospects and preventing monetary authorities from further tightening their monetary policy. America, nevertheless, remains a bright spot of the global economy, but a strengthening competition from Europe and Japan might undermine US consumer spending soon, taking a heavy toll on the private sector-generated component of America’s growth.

The European Central Bank (ECB) and Bank of Japan (BoJ) reported that deflation, haunting their respective economies, might soon be left behind as unconventional monetary policies, undertaken during the past years by both regulators, have proven more successful than expected.

© Flickr / Paul Lowry
Has Saudi Arabia Won in the Oil Price War Yet?
Vitor Constancio, the ECB Vice President, in his speech at the monetary policy convention in New York, stressed that a mere promise to launch a full-scale bond-buying, similar to the policies applied by the US in 2008-2014 and, more recently, in Japan, have effectively spurred the previously low inflation towards a target of 2 percent, which is more appropriate in a healthy economy. The euro has been depreciating against other major currencies with its current FX rate of $1.1196. For comparison’s sake, in early May 2014 the euro was worth nearly $1.4, closer to its 10-year average.

In late 2014, ECB head Mario Draghi announced the regulator would introduce unconventional monetary policies in order to spur economic growth and avoid deflation, damaging economic growth and industrial production. Some steps have been taken ever since, and this January Draghi said the full-scale bond-buying, yet to be implemented, would cost an estimated 1.1 trln euros ($1.2 trln) across the whole Eurozone. Such news has been one of the major drivers behind the European stock markets. Now, the ECB made clear the bond-buying will start in early March. This news, coinciding with optimistic corporate earnings reports, suggest economy of the Eurozone will aggressively expand in the medium-term.

This January inflation in the Eurozone fell to the unprecedented —0.6 percent, meaning the prices are falling. The ECB inflation target is 1.8 percent. Even with the actual deflation, economy of the Eurozone expanded by 0.2 percent in Q3, and by 0.3 percent in Q4, driven by surpluses in foreign trade and a rally in industrial development.

“There is indeed some recovery going on (in the Eurozone),” Constancio said. As it strengthens, “that will put upward pressure on inflation.”
Constancio’s Japanese counterpart, Hiroshi Nakaso, speaking at the same conference, said the Japanese economy is growing at an accelerated pace thanks to the bond-buying (currently worth 80 trln yer/year). In Japan, inflation reached 2.2 percent in January, while economic growth of 0.6% in Q4 is weaker than might have been. However, real salaries are increasing as labour market is tight and private sector enterprises have posted solid earnings, fueling expectations of growth accelerating soon.

The Eurozone and Japan have been economically weak since the onset of the global recession in 2008, while the US recovered quicker, reaching an impressive 2.3 percent average growth since 2009.

© AP Photo / Richard Drew
Global Stocks Mixed as China Poised to Add More Stimulus
But today tides may turn, as US Treasuries are appreciating again as inflation is dipping. Most of US economic growth is driven by governmental spending, and while manufacturing, financials and energy sectors are feeling alright, consumer confidence is falling because of the expectations that prices either will not grow soon or even will be declining.

Fed chair Janet Yellen told the Congress this week no further tightening should be expected in the short-term as economic growth is not sustainable enough. Businesses say that a stronger dollar has triggered a significant depreciation of imported goods, and the shale oil boom rendered fuels and utilities much cheaper. That said, the US might fall into deflation not because of structural mishaps, but over the abundance of resources and goods.

Unemployment in the US is at lowest since 2008, at 5.8 percent, while average earnings added 0.2 percent in 2014. Economic growth was 2.2 percent in Q4, and inflation is very low – at 0.7 percent in December. “There’s really no inflation,” Michael Franzese of the New York-based ED&F Man Capital Markets said.

According the Federal Reserve, interest rates might be risen in either June or September, depending on macroeconomic indicators. However, the real problem is deeper and more complicated than just an inflation rate in a single nation.

Washington is facing a new challenge – the Eurozone and Japan, its main competitors and rivals, are printing money, holding their currencies down and increasing volumes of exports in hi-tech and manufactured goods, while the US is tightening monetary policies. As a result, a stronger dollar and the oversupply of goods and raw materials in the domestic market, hurt businesses, as it is unprofitable to sell goods abroad, and tight competition in the domestic market decimates prices. The US badly needs new opportunities in their foreign trade, otherwise the rebound in Europe and Japan will hurt America’s businesses.

Nothing new, though, as a similar situation in late 1970’s-early and 1980’s was solved with the advent of ‘Reaganomics’. However, as opposed to Reagan’s laissez faire approach, this time around best solutions for America might be found in demand-side economics as stickiness of prices and wages seem to be the most concerning issue.