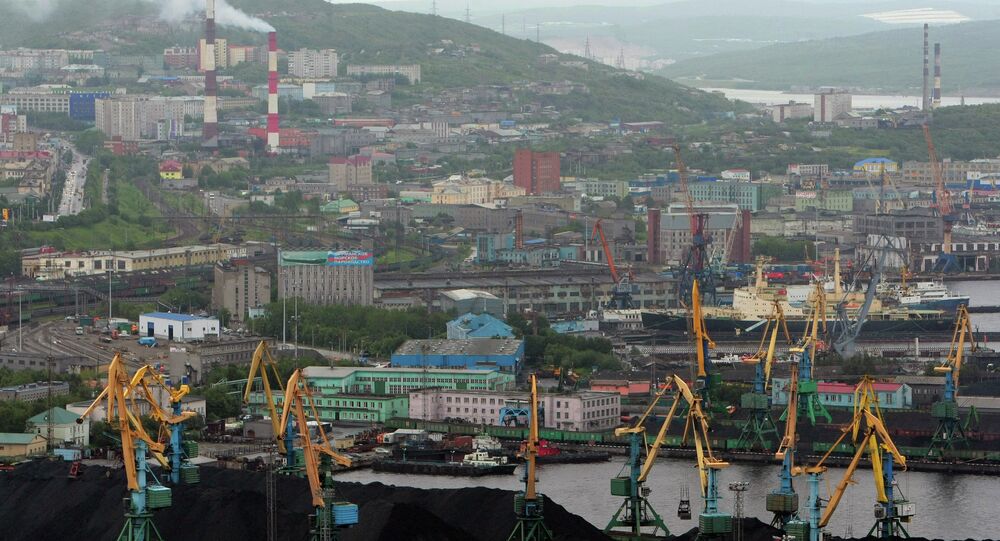 An official from Russia's port association expects Russia to increase the volume of shipments made via its Arctic ports to 115 million tons per year.

© Sputnik / Igor Podgornyi (File)
Russia's Rosneft to Invest $500Bln in Arctic Exploration Over 25 Years
Russia is currently modernizing its existing port facilities and constructing new terminals in the Arctic.  These efforts are expected to raise the port capacity of Russian Arctic ports from 72 to 115 million tons-worth of cargo per year over the next 15 years, according to RosMorPort Deputy Director Sergei Antonov.

"In 2013, the capacity of the ports in the Arctic Basin was estimated at 72 million tons per year, while the actual turnover consisted of only 46 million tons; that is, only 60 percent of the ports' existing capacity was in use," Antonov noted. He added that "today we are seeing changes in the structure of cargo turnover," including "an increase in the transshipment of dry cargo. The bringing in of materials for the construction of the Sabetta port in Yamal made a significant contribution to these figures."

Citing the policy document "Strategy for the Development of Port Facilities up to 2030," Antonov stated that the growth in demand for liquid cargo by the end of this period "is expected to reach 133 million tons." Furthermore, "a lot of interest has been raised in the development of those ports which earlier did not see investment. Today there are projects aimed at reviving these ports. Simply via the revival and modernization of existing port capacity and the construction of new facilities, Arctic port capacity will increase from the present 72 million tons to 115 million tons. This will be possible if development proceeds along a conservative energy and raw materials development scenario."

© Sputnik / Vladimir Baranov
Russia Plans $123.3 Million in Upgrades for Arctic Military Base
Antonov noted that Arctic ports presently account for eight percent of Russia's total cargo turnover, and that the ports which witness the most traffic are those which are equipped with heavily developed infrastructure, including railway connections. These include the ports of Murmansk, Arkhangelsk, Vitino and Kandalaksha. The Sabetta port in Yamal is expected to add 16.5 million tons of capacity, while a second terminal for the unloading of oil on the Yamal peninsula is expected to raise capacity by another 8.5 million tons. "Furthermore, the large project for the redevelopment of the Murmansk commercial port will add 2 million tons of capacity," Antonov noted.

Antonov's comments, made in December before the Fourth International Forum 'The Arctic: Present and Future', were published Tuesday by Russian maritime news service Morvesti.ru.

© AP Photo / Rosneft press service
Russia’s Exploration Work in Arctic Almost Unaffected by Oil Price Slump
Over the past several years, Russia has been working on the development of its Artic territories in areas including hydrocarbon exploration and production, and has been developing a Northern Sea Route, an alternative Europe-Asia trade route made possible by the regression of the polar ice cap. In April 2014, the Russian government announced the formation of a new state body for realizing Russian economic policy in the region. In December, the Russian military announced the formation of an Artic Command, dubbed North, with the aim of protecting Russia's Arctic borders.
...
Reddit
Google+
Blogger
Pinterest
StumbleUpon
Telegram
WhatsApp
33