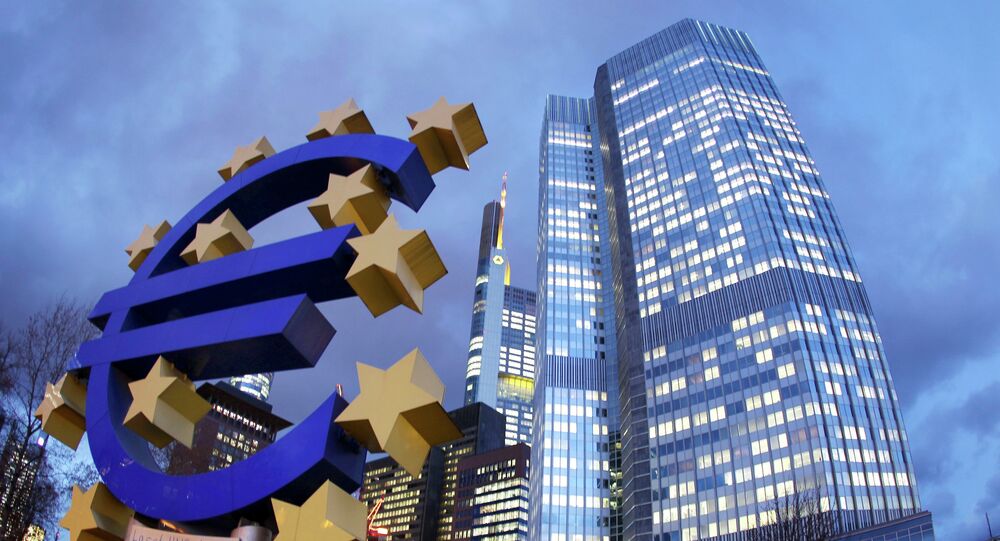 The Eurozone risks falling into a deflationary spiral; while some experts put the blame on EU's periphery countries, others point the finger at Germany, claiming its policies are threatening the euro.

© Flickr / Kasi Metcalfe
Domino Effect: If Greece Leaves Eurozone, Cyprus May Follow
Ekaterina Blinova — The Eurozone risks falling into a deflationary spiral with decreasing prices and wages and growing unemployment rates; while some experts blast the EU's periphery countries for corruption and money waste, others point the finger at Germany, claiming that its irresponsible policies are currently threatening the euro.

According to Eurostat, a statistical office of the European Union, euro area annual inflation reached —0.6 percent in January 2015 down from —0.2 percent in December 2014. The Eurozone is facing negative inflation rates due to the fall in energy prices. Experts note that the trend is rather dangerous, since the low inflation environment is causing further economic slowdown: consumers are not motivated to spend more while businesses see no reason to increase production while its goods are getting cheaper.

Meanwhile unemployment rates are rising steadily in the Eurozone periphery: while the lowest unemployment rates were typically registered in Germany and Austria (about 5 percent), the highest were recorded in Greece and Spain (more than 20 percent) in the last two years.

© Fotobank.ru/Getty Images
European Commission Expects Eurozone GDP Growth at 1.3% in 2015
Although experts point out the necessity of structural reforms in such debt-laden countries as Greece, hit by internal financial crisis, they also accuse Germany, the flagmship of the European Union for its irresponsible financial policies labeling it as "the biggest serial defaulter" of the twentieth century. Experts note that the European Central Bank (ECB) measures of keeping interest rates at low levels for long periods facilitated Germany's economy growth but at the same time triggered widespread asset price inflation in EU's periphery. Furthermore, they emphasize that German financial organization took part in creating numerous property bubbles in the Eurozone, particularly in Spain and in Ireland.

In the light of the ongoing economic slowdown in the Eurozone, threatening to push the EU toward the new round of the financial crisis, Eurosceptic parties as well as right-wing conservatives called upon the nations to leave the Eurozone. Remarkably, they have recently gained extraordinary popular support across the European Union.

© REUTERS / Alkis Konstantinidis
Greek PM Samaras Hopes That New Government Will Keep Country in Eurozone
While Germany and other wealthy member states are trying to convince the countries to team up and work together for the sake of Europe's prosperity, Greece has thrown a challenge to Brussels claiming it will leave the EU. Economic analysts underscore that Greece's "bold" move may trigger a domino effect, encouraging other countries struck by the financial difficulties, for instance, Portugal, Spain and Italy to flee the Eurozone. Thus far, the European Union is facing a painful dilemma, whether to write down Greece's debt (as well as debts of other member states suffering from austerity measures), in accordance with Greek party Syriza's demands, or to watch the gradual dismantling of the Eurozone and the euro fading.
...
Reddit
Google+
Blogger
Pinterest
StumbleUpon
Telegram
WhatsApp
105