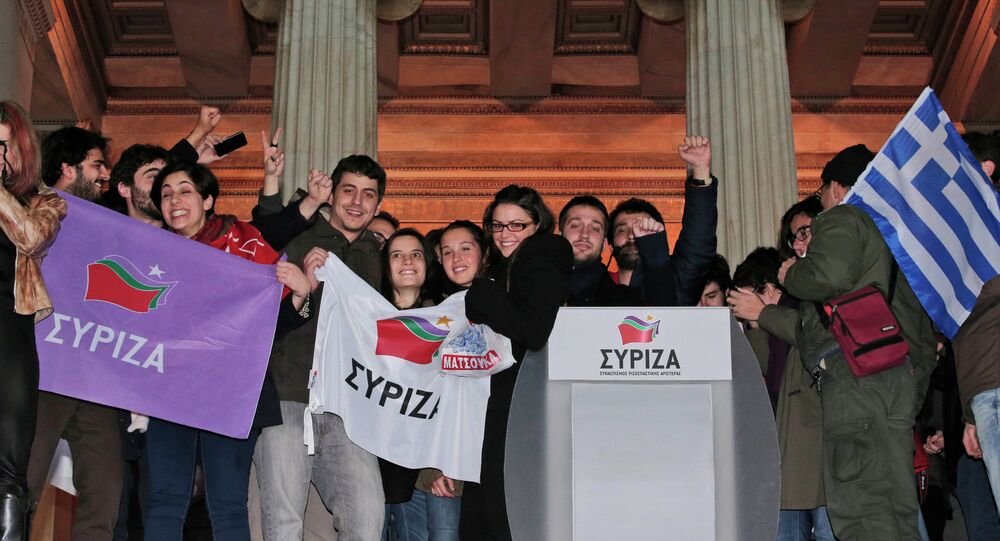 The finance minister of Greece is going to enter into negotiations with the Eurogroup president, who is arriving in Athens on Friday. The new Greek government is planning to negotiate the country's $270 billion bailout debt with international creditors.

© REUTERS / Marko Djurica
Compromise Between Syriza, EU Lenders May Be Uneasy, Costly for Tsipras
MOSCOW, January 28 (Sputnik) — Greek Finance Minister and member of the Syriza party, Yanis Varoufakis, has plans for a new deal with Greece’s European creditors, he said at a ceremony to handover responsibilities at the Finance Ministry Wednesday.

"Our suggestion is a new deal with Europe that will bring a new opportunity for economy development. We will discuss these questions with the European Central Bank, colleagues from other countries as soon as possible," Varoufakis said.

The finance minister added that he is going to enter into negotiations with the president of Eurogroup Jeroen Dijsselbloem, who is arriving in Athens on Friday.

"We are changing the logic of fighting the big debt problem," Varoufakis stressed.

Earlier on Wednesday, Greek Prime Minister Alexis Tsipras said during his first cabinet meeting that he plans to negotiate the country's $270 billion bailout debt with creditors.

© AP Photo / Lefteris Pitarakis
Syriza's Victory in Greek Elections to Help End EU Sanctions Against Russia
In 2010, the troika of international creditors: the European Commission, the International Monitory Fund and the European Central Bank, agreed a $146 billion bailout package for Greece to prevent a default on its large debt.

The Syriza party, or the Coalition of the Radical Left, won Sunday's parliamentary elections in Greece with 36.34 percent of votes. The party secured 149 seats, two seats short of a parliamentary majority.

In its pre-election promises, Syriza pledged to put an end to the country's painful austerity plan and to resolve the issue of its debt with its EU partners.