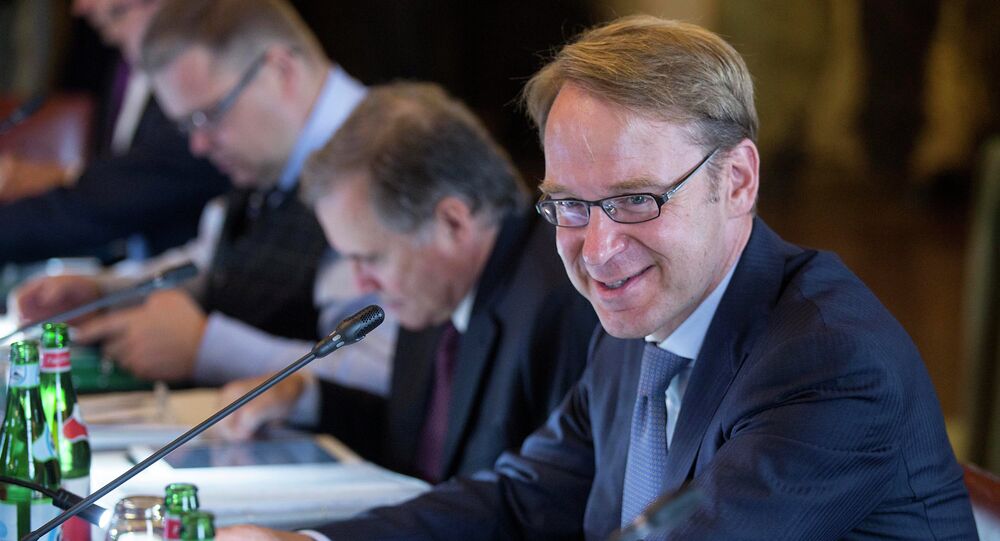 The head of Germany's central bank has said that quantitative easing will not solve the economic problems of the Eurozone.

"Bond-buying by the government is not a normal instrument of monetary policy," Weidmann told the paper on Sunday. Such a policy, when carried out in a monetary union like the Eurozone, "is connected with particular drawbacks and risks," Weidmann continued, adding that "there should be a high threshold for their use."

When asked if the ECB's decision to go against the wishes of financial authorities in Germany, who had repeatedly expressed their misgivings over such a move, represented a watershed in relations between the ECB and its strongest national economy, the Bundesbank president replied, "I would not hype this as a turning point, but for me it is nevertheless a grave decision."

© AP Photo / Michael Probst
Oil Prices Fall, Gold Hits Peak, Euro Under Pressure Ahead of ECB Meeting
This is not the first time Weidmann, who sits on the ECB's Governing Council and voted against the QE decision, has voiced his opposition to the policy. The Guardian reports that at a conference which was held in December in Frankfurt, he said, "you cannot simply apply the same formula in Europe that has enjoyed success in the US or in Japan…In the USA, there is a central state that issues bonds that are very safe and secure. We don’t have that central state here."

Weidmann's comments come after similar caution was expressed by Bank of England chief Mark Carney at Davos's World Economic Forum, who said that such monetary policies should lead to "responsible risk-taking," and not recklessness, Bloomberg reported. "In an environment of low interest rates, and low interest rates for a period of time, and also quantitative easing, there can be excessive risk taking," said Carney on Saturday, adding that the target was to tackle the prevailing "environment of reticence" in the markets.

© Fotolia / VRD
ECB Officials Remain at Odds on Program of Bond Purchases
The US Federal Reserve began its bond-buying policy in 2008 along with slashing interest rates to almost zero, a move echoed by current ECB policy. Senior Fed official John Williams explained in 2012 that according to the bank's rationale, quantitative easing "drives down a broad range of longer-term borrowing rates," and consequently "lower rates get households and businesses to spend more than they otherwise would, boosting economic activity."

ECB chief Mario Draghi, having announced on Thursday a record €1.1 billion stimulus package worth €60 billion a month until at least September 2016, is hoping the move will have a similarly stimulatory effect in the Eurozone, which in December posted 0.2 percent year on year deflation, driven by low energy costs following the collapse in oil prices.

In October, the US Fed announced the end of its stimulus program, and now faces the task of selling back the $3 trillion in bonds it accumulated over the six year period of easing; it hopes to return its balance sheet to its 2008 $1 trillion level.