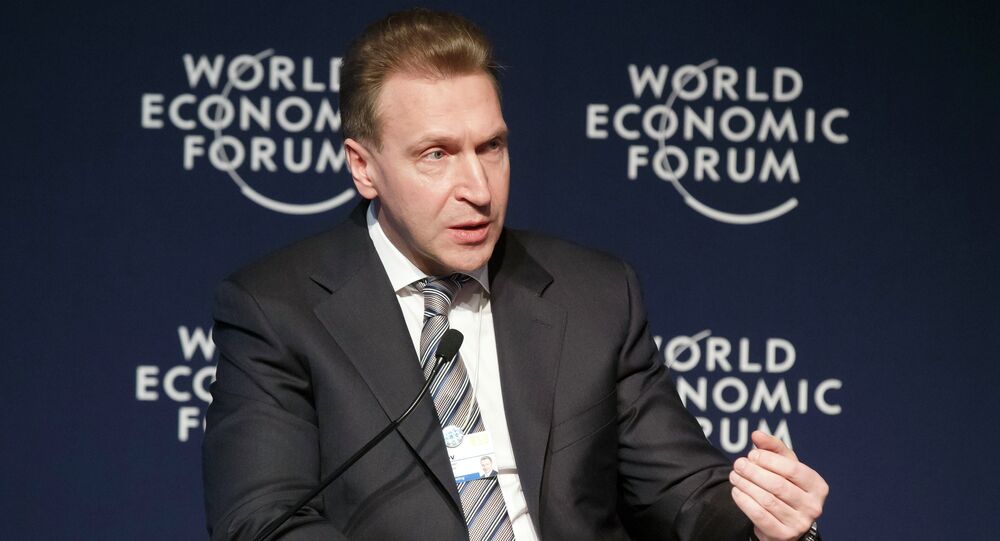 “We hadn’t gotten out of one crisis [2008-2009] and then smoothly started to move into another even before the events in Ukraine and before everything related to Crimea, because we briskly started to lose our rate of growth and it became clear that a structural crisis was looming,” Shuvalov said at a working breakfast on the sidelines of the World Economic Forum in Davos.

Russia's current economic problems are mainly because the country forgot the lessons it learned during the 2008-2009 crisis, Shuvalov stressed.

“The problem with the Russian economy is that the modernization agenda that appeared as a result of the 2008-2009 crisis was soon forgotten and replaced as oil prices started surging,” the Russian official said.

As for the Ukrainian crisis and its settlement, Shuvalov doubts the world's leader are capable of breaking this stalemate:

“I don’t think that politicians have the ability of quickly settling the Ukrainian crisis.”

The economic situation in Russia is extremely tense and may further deteriorate, Shuvalov added.

“We should understand that Russia has found itself in an extremely difficult situation. Our economic situation is not good; it may get even worse or may stay as it is,” Shuvalov said, adding, “Many consider the current situation to be not that sharp as it was in 2008,” though the current difficulties Russia is facing are “more extreme.”

Shuvalov stressed that structural economic reforms in Russia should be more well-defined and must be carried out within three years.

“Russia’s agenda regarding structural reforms should be restructured, it should have a shorter period, for example three years,” the first deputy prime minister said.

He underlined that he was referring to a separate reform agenda and not to the economic recovery plan announced by the government.

“This is not an anti-crisis plan,” Shuvalov added.

On Wednesday, Russian President Vladimir Putin pointed out that the structure of the national economy remained practically unchanged since the 2008 global economic crisis and stressed that the current situation should push Moscow “to change this structure more energetically."

The Russian leader made the statement during a meeting at which the government announced a $21-billion economic growth plan.

© AFP 2021 / FABRICE COFFRINI
World Economic Forum in Davos: Facts And Details
The Russian economy is currently experiencing a downturn caused by a dramatic drop in the price of oil, the country's most important export commodity. The ruble has lost about a half its value against the dollar since mid-2014. Russia has also been hit by Western economic sanctions, imposed on Moscow over its alleged participation in the Ukrainian crisis, a claim the Kremlin has repeatedly denied.

According to the most recent report by the International Monetary Fund (IMF), the Russian economy is expected shrink by three percent in 2015.

Igor Shuvalov noted that Russia needs to prepare itself for a rise in unemployment.

“For many the current situation isn’t seen as shocks, but this is an incorrect understanding of the situation. [Russia] needs to prepare for the fact that people will be leaving the market as unemployed and they need to adapt to the new conditions,” Shuvalov said at a working breakfast on the sidelines of the World Economic Forum in Davos.

“The anti-crisis program is set so that we can adapt to the new conditions and we have all of 2015 to do this,” Shuvalov added.

On Thursday, Russian Prime Minister Dmitry Medvedev said the plan to boost the country's sustainable economic development will include support for the small businesses and companies. The prime minister noted the implementation of these measures may require of about 60 bills and a series of presidential decrees.

The World Economic Forum (WEF) is a Swiss non-profit foundation promoting global improvement through the collaboration of private and public sectors. Founded in 1971 by current president and University of Geneva business administration professor Dr. Klaus Schwab, the modern day forum is considered the preeminent gathering of the most powerful people in the world.