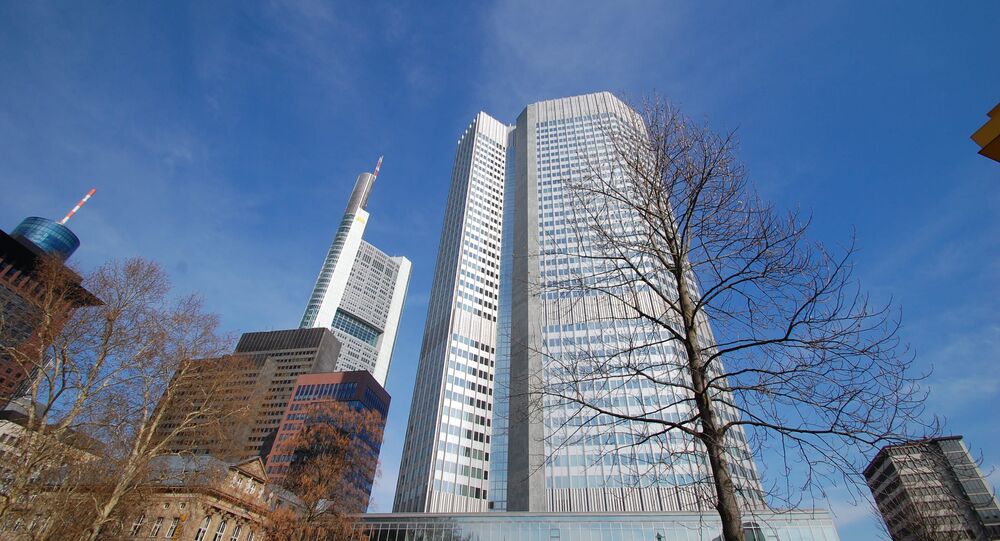 The ECB's anticipated decision to launch QE comes amid growing concern about deflation in the Eurozone, and the lack of fiscal reform on the part of its member states.

© AP Photo / Michael Probst
Oil Prices Fall, Gold Hits Peak, Euro Under Pressure Ahead of ECB Meeting
MOSCOW, January 22 (Sputnik) – The European Central Bank is set to unveil a broad quantitative easing plan on Thursday which could be worth up to €1 trillion ($1.2 trillion), in an effort to stimulate growth in the Eurozone amid trepidation regarding the deflation which set in in December and the course of the European project itself.

"I think the first steps of the [European] commission and the discussion in the next days of the European Central Bank – let me be very clear, I respect the independence of the European Central Bank – could help Europe to give a message of new economic direction," said Italian Prime Minister Matteo Renzi in Davos on Wednesday, commenting on the widely-expected move from the ECB to launch a bond-buying program.

The ECB is expected to make the announcement at 2:30pm ECT, after the regular meeting of its Governing Council in Frankfurt. Up to now, a package comprising three measures has been implemented by the ECB to stimulate the Euro economy, which has contributed to its current balance sheet total of around €2.2 trillion in assets. An ABS [asset backed securities] purchase program as well as TLTROs [targeted longer-term financing operations] and purchases of covered bonds have been accompanied by record low interest rates. Rates on the main refinancing operations, marginal lending facility and the deposit facility are currently at 0.05%, 0.30% and —0.20% respectively.

At the press conference following the December 4 meeting of the Governing Council, ECB head Mario Draghi gave a strong indication of the scale of the intended easing measures, saying that the bank's measures "will have a sizeable impact on our balance sheet, which is intended to move towards the dimensions it had at the beginning of 2012." In 2012 the bank was in possession of assets worth around €3.1 trillion. According to Bloomberg, sources at the ECB have said that Draghi and his Executive Board are proposing to spend €50 billion a month until December 2016.

© REUTERS / Leonhard Foeger
Gold Prices Likely to Rise if ECB Introduces Quantitative Easing
However, policymakers in Germany, the strongest economy in the Eurozone, have reservations about policies which aim to stimulate the economy through the purchase of debt, warning that the countries of the Eurozone need to implement economic reform policies before seeking refuge in the ECB's printing press. In November, Business Insider reported that Bundesbank boss Jens Weidmann articulated Germany's opposition to the move in an interview with the German Handelsblatt newspaper. "Such purchases might create new incentives to run up debt, besides adding to the reform fatigue in a number of countries," said Weidmann. Despite such objections from the economic powerhouse of the Eurozone, it appears that the ECB is pushing ahead with its program.

The misgivings from Berlin were echoed at Davos on Wednesday, when experts including People's Bank of China governor Zhau Xiaochuan reiterated that political reforms were paramount in order to secure confidence in future growth. "Monetary policy may create room, for a period, for other structural policies to come in, be implemented and do a good job," Xiaochuan told Reuters. "But monetary policy is not a panacea to reach the target."

The chairman of Swiss bank UBS Axel Weber also warned that the political dimension, including questions about the political future of the Eurozone, were paramount in solving the crisis of growth. "I have not seen enough reforms in Europe and the ECB will not fix this issue," said the former Bundesbank president, according to Reuters. "We need to move Europe to that next stage and if that doesn't happen I think there will always be questions about the viability of the project. Europe has not done enough to dispel these concerns," Weber warned, and went on to stress the need to change labor market and pension scheme regulations.