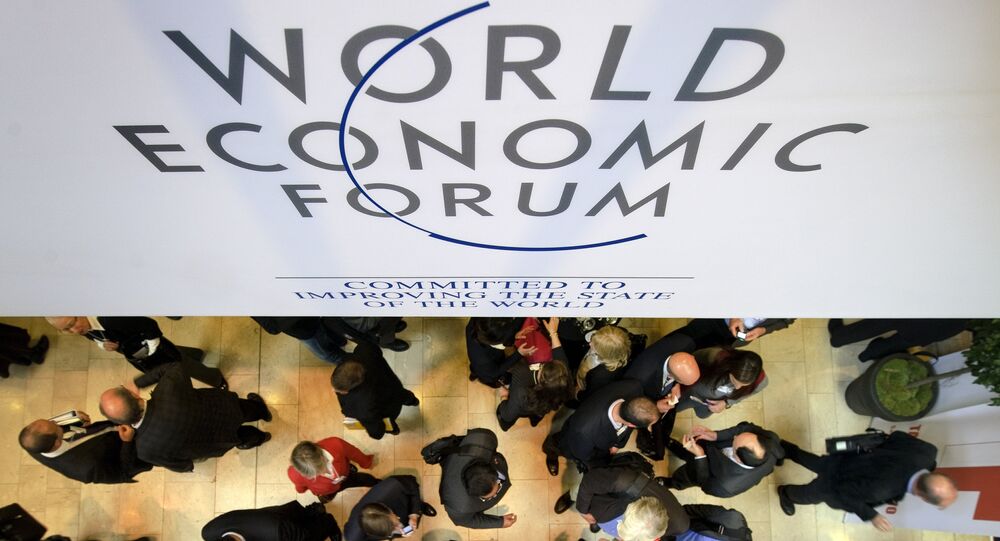 On January 21, the 45th World Economic Forum kicks off in Davos, Switzerland. Politicians, businessmen and economists will convene in the highest (1,560 m [5,120 ft]) city in Europe, to discuss the world economy. This year’s theme is 'The New Global Context.' Here is a brief history of one of the world's most prestigious events.

© Sputnik / Igor Samoilov
What the Year 2015 Has in Store For Russia's Economy
MOSCOW, January 21 (Sputnik) — The World Economic Forum (WEF) is a Swiss non-profit foundation promoting global improvement through the collaboration of private and public sectors. Founded in 1971 by current president and University of Geneva business administration professor Dr. Klaus Schwab, the modern day forum is considered the preeminent gathering of the most powerful people in the world.

In its founding year, the meeting, known as the European Management Forum from 1971 through 1986, was attended by over 400 high-level managers from many leading European companies.

Early forums focused predominantly on European trade and competition with the rest of the world. Over the years the agenda has expanded to include political and economic issues, the effects of technological progress, and third-world debt. As the 1970s progressed, the organizers invited influential figures from all over the world to the annual meeting. By the late-1980s it was one of the world’s most prestigious events.

WEF is paid for by its 1,000 member companies, and eligibility is defined loosely as those global businesses with greater than $5-billion in annual trade. These businesses come from over 50 countries, and include 20 Russian companies. WEF members’ "financial performance" eligibility is reviewed annually.

The Geneva-based WEF’s annual meeting is traditionally held between late January and early February, and always in Davos. The only exception to this tradition found the forum in New York in 2002, to express solidarity with the United States in the wake of the 9/11 terrorist attacks.

Will the World Economic Forum in Davos make a difference?
Voted: 210
All polls
The Davos annual meeting is an opportunity to discuss pressing political and economic challenges in an informal environment. Davos brings together those who control a vast array of the world’s physical, social and financial resources, and includes heads of state and government, business leaders, prominent scientists, economists, academicians, religious leaders and selected members of the media. One of the forum’s more positive elements is the opportunity for competing power-brokers, ordinarily perceiving themselves as opponents, to talk to each other “off the record,” in an atmosphere devoid of official consequence.

Important economic challenges for the year set the tone at Davos. Professional communities are created within the framework of the forum. These can include a club of entrepreneurs, a group of company heads from like-minded industrial sectors, an ad hoc economic research thinktank, and many other casual groups of broad or narrow focus. Sprinkled throughout these various groups can be found famous artists, musicians, and other cultural figures.

The forum is conducted in meetings and panel discussions covering a wide range of issues. About 300 sessions, seminars, roundtables and "mini-summits" are held. There is very little protocol, aside from civility and the right (if you are an invited member) to be heard, no pre-planned speeches and no resolutions.

© East News / Imaginechina
China to Surpass US to Become Largest Economy in 2025: Report
Beginning in 1979, WEF experts issued global competitiveness reports. The annual report is based on metrics of economic growth, cultural development and what it calls a “Global Competiveness Index,” taking into account information gathered from over 140 countries.

The Soviet Union sent its first delegation to Davos in 1987. The Russian Federation has been present at Davos every year since 1992.

This year, two of Russia’s largest banks, VTB Bank and Sberbank, are “strategic partners” at the 45th World Economic Forum, to be held January 21-24. Around 2,500 heads of business, about 50 state and government leaders, many NGO representatives, experts and cultural figures will attend.