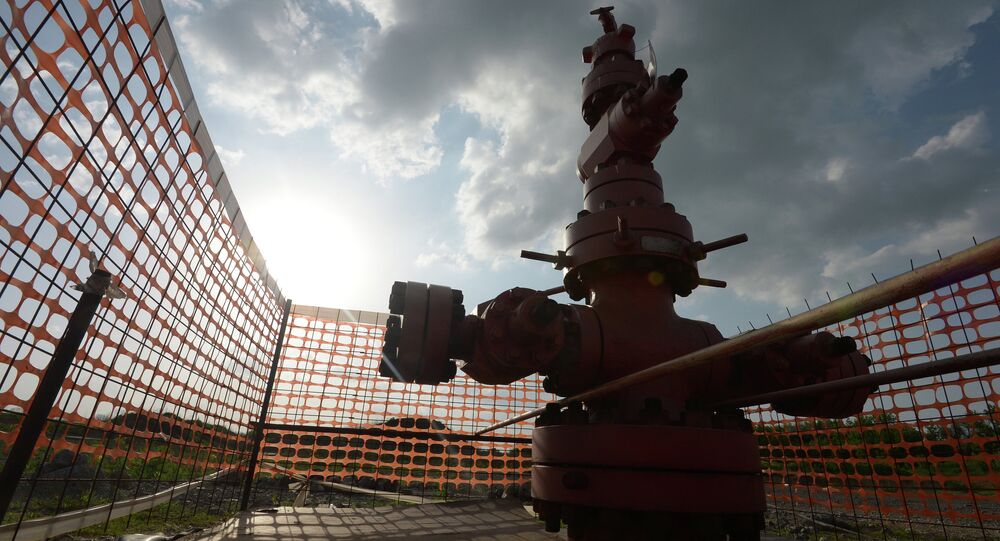 The shale oil industry in the UK is lagging behind its thriving North American counterpart for several reasons, including the excessive bureaucracy, insufficient knowledge of the British Isles’ shale potential and low oil prices.

© AP Photo / Eamon Mac Mahon
More Petroleum Turmoil Brewing Within America’s Shale Oil Industry
MOSCOW, January 19 (Sputnik) — The shale hydrocarbon revolution is unfolding in the UK at a much slower pace than the government initially expected, as only 11 new oil and natural gas wells are planned to be constructed in 2015, according to a report by The Guardian.

The main reason behind such frustrating numbers is that with oil prices so low at this point, little to no commercial yields are available. However, some UK academics argue that a lack of reliable data on the potential volumes of shale oil and gas that can be produced in the future might be the true reason behind the sluggish development of the innovative industry.

“Given the low number of wells that have been drilled in the UK, and the very low level of experience of shale gas production here, it is far too early to say how much shale gas could be produced. The prime minister’s statement that shale could provide gas for the UK ‘perhaps for as long as 30 years’ is therefore very speculative and optimistic,” Professor Jim Watson of the UK Energy Research Centre told The Guardian.

The British government had repeatedly reiterated its commitment to the development of a sustainable shale oil industry to provide independence from energy imports. In Prof. Watson’s opinion, the UK will not be able to launch a full-scale production of shale oil before the early 2020s, and even at that point the nation will still have to import energy.

© AP Photo / Rosneft press service
US Shale Revolution Expected to Shrink Amid Falling Oil Prices
There is no reliable complex set of data yet on what shale oil and gas projects are currently underway and how much resources they are planning to extract. The United Kingdom Onshore Oil and Gas (UKOOG) and the Department of Energy and Climate Change (a regulatory body) have both failed to provide appropriate evaluations of the UK shale industry prospects.

However, lower energy prices are contributing to the slow development of shale industry in the UK – the world does not need any more oil at this point, as supply far exceeds demand.

“I think the reality here is that we’ve seen statements in the US that a significant number of [shale] players would be robust at $40 [a barrel]. What we’re seeing is a classic over-supply and under-demand scenario and that will ease itself,” Ken Cronin of UKOOG told The Guardian.
Fracking technology, used along with horizontal drilling in the process of shale oil and gas extraction, was banned in the UK for some time after a test drill in Lancashire in 2011 resulted in a micro-earthquake near Blackpool. The prohibition was revoked in 2012.

© AFP 2020 / POOL / ANDY BUCHANAN
Scottish Minister Urges UK to Ensure Sustainability of North Sea Oil, Gas
One of the biggest deterrents is the enormous bureaucracy leading up to the actual drilling. Different interests must be complied with, and the environmentalist lobby, opposing fracking, is also traditionally stronger in Europe than in North America where fracking is more prevelant.

“I think it [The Guardian’s estimate of amount of wells] underestimates the amount of work done by each individual operator, bearing in mind we’ve had changes in planning, changes in permitting, etc. You should see more results of that groundwork over the course of the next 12-18 months,” said Cronin, adding that UKOOG is not aware of how many shale projects have in fact been launched in the UK and how much drilling will be happening in 2015.

It is also unknown whether the UK shale industry will expand along a model similar to North America, where plentiful number of small drillers flooded the market, or be monopolized by the major energy giants, such as Total, GDF Suez and Centrica who have already started drilling via their local subsidiaries.

All in all, the unlucky composition of the three factors, namely, lack of information, lack of market opportunities and excessive regulation are holding down the British shale industry, effectively preventing the UK from experiencing a true revolution in energy supply.

US Risks Running Out of Shale Natural Gas by 2020: Study