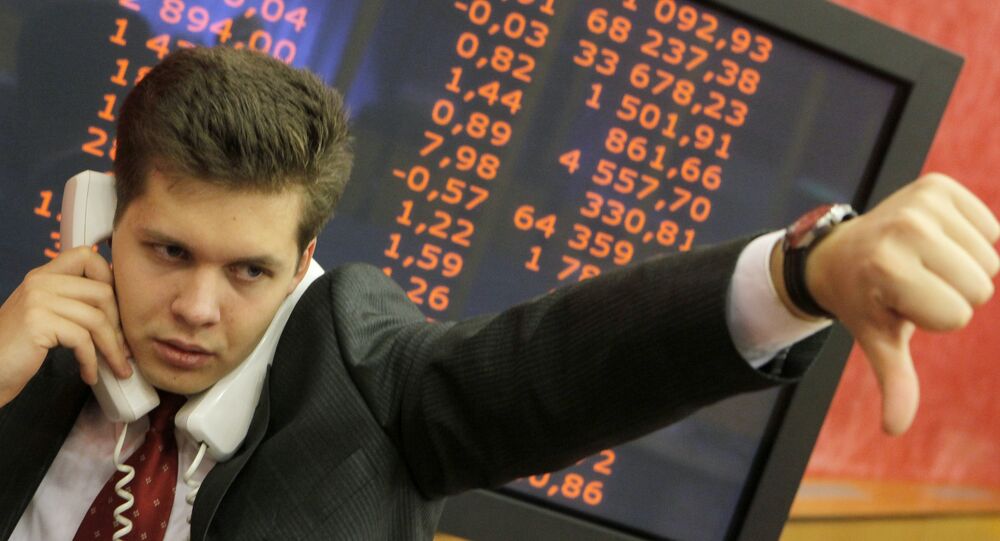 Investors are cautious worldwide, with markets in Asia and Europe largely bearish, while the US is surging on optimistic macroeconomic data.

MOSCOW, December 11 (Sputnik) — Stock markets in the Asia-Pacific closed in the red zone today as Chinese debt concerns and lack of global demand for manufactured goods rendered investors bearish, while European stocks ended the day flat, shaking between gains and losses during the trading session on new ECB loans, and the US markets surged decisively on the optimistic retail sales and unemployment data.

© Sputnik / Alexei Filippov
Global Stocks Retreat on Turmoil in China, Greece
In Asia-Pacific, Japanese stocks hit the 2-week low as pessimistic manufacturing sector data, a stronger yen and a slump in oil prices – all due to sluggish global demand – discouraged investors from risky yet profitable operations. Nikkei Index shed 0.9% in its third day of losses due to a decline in stocks of major exporters, among which are the electronics maker Panasonic (-1.8%) and the automotive company, Toyota (-0.6%).

In Europe, the trading day ended with most indices flat, as aftereffects of Greece’s political crisis are still making investors nervous, while the newly-allocated loans by the European Central Bank (ECB) accounted for less than the markets expected. The ECB loans are part of the regulator’s limited stimulus policy, designed to spur inflation and growth in the sluggish Eurozone.  European banks received today some 130 bln euros ($161 bln) in ECB loans.

Kokhanchikov
Saudi Conspiracy to Depress Oil Prices ‘Low Blow’ to Iran: Analyst
“The issue of liquidity in Europe is key,” Francois Savary of the Geneva-based Reyl & Cie told Bloomberg. “For European equities to outperform the U.S., which we think they will, you need to have liquidity in the system. Will there be QE? If the TLTROs are not working, the ECB needs to add to existing instruments and find other ways of increasing their balance sheet.”

As a result, the Stoxx Europe 600 index slid 0.1%, Germany’s DAX Index added 0.64%, the British FTSE 100 Index slid 0.59%, while France’s CAC40 was flat at a close, sliding 0.05%, according to the data by Reuters. Greek political risks still have a decisive impact on domestic financial markets, as the nation’s ASE Index slumped by 7.4%, losing 20% its value this week.

US stocks rose for the first time this week after retail data surpassed forecasts and unemployment went down. The dollar rose against other currencies.

© AP Photo / Keith Srakocic
Shale Oil Boom May Become Next Bubble
The retail sales in the US added 0.7% in November, which is the 8-months high. Jobless claims slid 3,000 to 294,000 the first week of December. Investors are cautious, though, ahead of the Fed policy meeting next week, which might bring news of the timing in further monetary tightening.

“When you see a big decline like we did yesterday we’re poised for a little bit of a bounce back and retail sales are helping,” Larry Peruzzi of the Boston-based Cabrera Capital Markets LLC told Bloomberg. “Globally, we’re still one of the bright spots. Retail sales are always an indication that consumers are feeling good.”