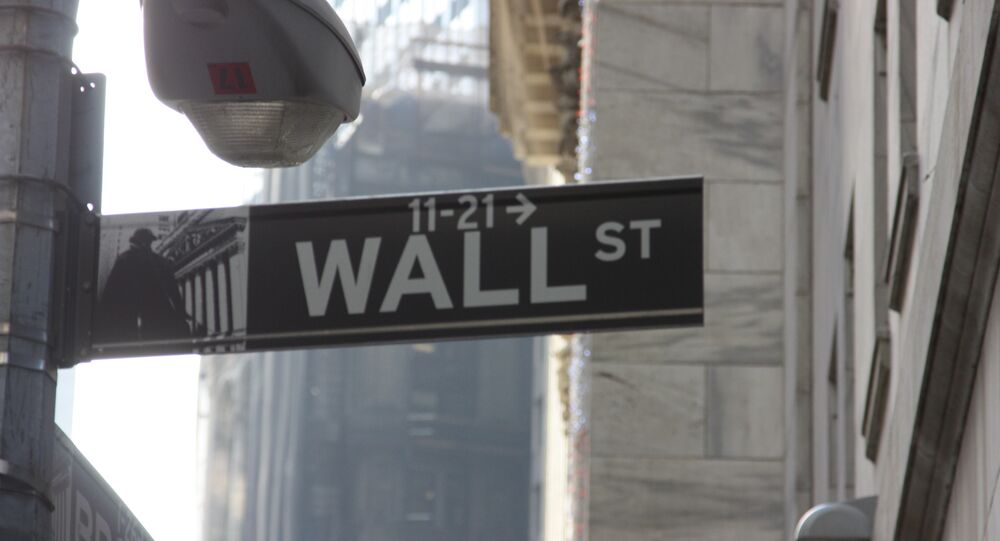 Stock markets are in the red zone today as OPEC said there would be lower demand for crude oil in 2015.

MOSCOW, December 10 (Sputnik) – Stock markets worldwide have declined today as OPEC cut its next year’s forecast on oil demand, in part due to China’s debt turbulence, while yesterday’s ‘red scare’ in Greece caused a serious negative impact on stocks across Europe, raising volatility in stocks, and rendering investors nervous in an obvious lack of stimulus from the European Central Bank.

© Sputnik / Alexei Filippov
Global Stocks Retreat on Turmoil in China, Greece
Stocks in Asia-Pacific rebounded somewhat after yesterday’s shock, caused by mainland China’s announcement of its intention to divide provincial governments’ debt in two categories, the Beijing-backed bonds and the rest. Investors previously believed that all of the provincial bonds were guaranteed by the central government. Nevertheless, today Chinese stocks went up in an aftershock rebound, with Shanghai Composites adding 2.93% and Hong Kong’s Hang Seng adding 0.16%, according to Bloomberg data.

Threat of deflation added to China’s struggle, as revealed today, as factory-gate inflation fell in November due to weak demand on made-in-China manufacturing goods both at home and overseas. According to Bloomberg, producer prices in China added only 2.7% last month, their weakest since 2009, and consumer prices grew 1.4%, a 0.2% month-on-month decline.

Chinese stocks rebounded today partly due to the speculation that Beijing would add stimulus on weak inflation data.

© Sputnik / Artur Alexandrov
China Ready for Further Monetary Easing as Deflation Looms
“China has entered into a rapid dis-inflation process, and faces the risk of deflation,” Liu Li-Gang of Australia & New Zealand Banking Group Ltd. in Hong Kong told Bloomberg. “As the PBOC has exhausted its newly invented and ineffective policy tools, we believe the next move will have to be a RRR cut in order to regain policy effectiveness and credibility.”

In Japan, a stronger yen led to a decline in major stocks, as investors sold exporters’ shares. News from Greece prompted investors to abstain from risky operations, resulting in a sell-off in the most volatile stocks.  Japan’s Nikkei Index went down by 2.3%, dragged by a slump in Nissan Motors (-3.4%) and Toyota (-3.1%). The Topix index shed 2%. The yen added 0.95% to 118.5 against the dollar amid the short-term political turmoil as elections are looming; however, the Japanese national currency is on a depreciation trend, having lost 16% of its value this year as Abenomics seem to work so far.

© Sputnik / Vladimir Fedorenko
Greece Intends to Exit EU-IMF Bailout Program a Year Ahead of Schedule
European stock markets dropped on recent news from OPEC, dragged down by shrinking stocks in the energy sector. The Stoxx Europe 600 Index retreated 0.3% as Royal Dutch Shell, BP and Total all lost about 1% of their stocks. The British FTSE 100 lost 0.45%; in France, CAC 40 shed 0.64%, but the German DAX Index remained flat, adding a mere 0.06%, pushed up by a surge in stocks of the Daimler automotive enterprise (+3.6%), currently seeking some $1,57 bln in their Hong Kong IPO.

“With oil prices in free fall, we’ve come to a point where it’s very difficult to be a buyer,” said Steven Santos of Lisboa-based X-Trade Brokers DM SA. “The lower demand for oil also suggests lower economic growth, and this negativity is spreading across most asset classes. When you add this to the political turmoil coming from Greece, it’s a dangerous combination for the markets. Looks like we might not get that Santa rally after all.”

© REUTERS / Heinz-Peter Bader
OPEC Not Opposed to Shale Oil: Secretary General
Across the Atlantic, stock on Wall Street found themselves in the red zone as well, impacted by OPEC’s lower forecast on oil demand and the ‘red scare’ in Greece, which caused a major sell-off in the nation’s banking shares. American investors were bearish as the shale oil boost is one of the main growth drivers at this point and lower demand for oil in 2015 means slower growth in the US.

“Oil is lower on the reduced demand outlook and it’s not a surprise to see the rest of the market, at least in sympathy, going down on that,” Michael James, of Wedbush Securities Inc., told Bloomberg.

However, the data, indicating an increase in retail sales, having come earlier this week, suggest that bullishness may prevail on Wall Street. With unemployment steady, there is more optimism in America, giving the Fed clear indications that an interest hike may soon be necessary in order to prevent bubbles in some thriving industries, like shale oil.