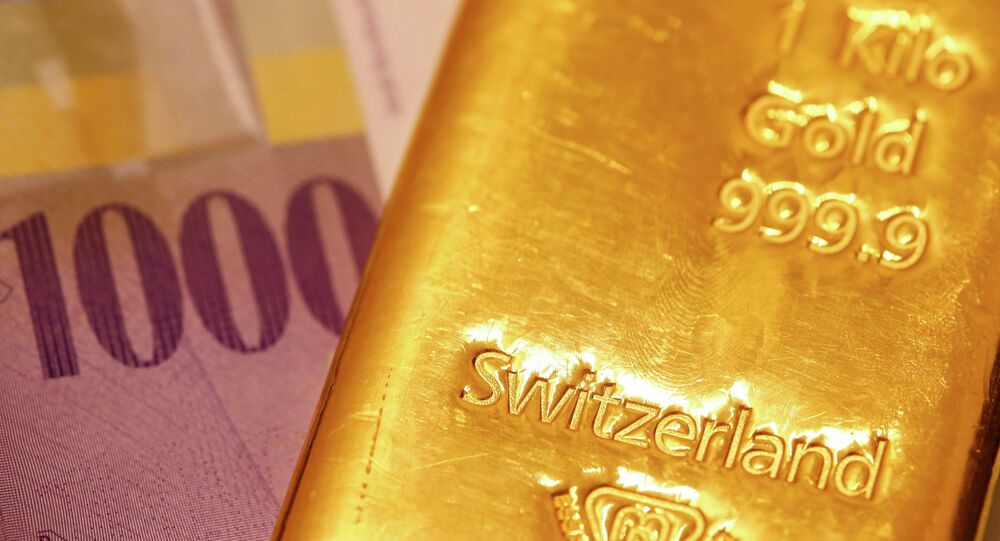 The Swiss are casting their ballots on Sunday in the ‘Save Our Swiss Gold’ referendum which, if passed, will require the Swiss National Bank to hold 20 per cent of its assets in gold, essentially moving the country back onto the gold standard.

© REUTERS / Leonhard Foeger
Switzerland on Verge of Huge Gold Investment
MOSCOW, November 30 (Sputnik) – The Swiss are heading to the polls on Sunday in a vote that could define the nation’s economic future.
The referendum, Save Our Swiss Gold, is set to decide whether the country should get back to the Gold Standard, placing a limit on how much money the Swiss National Bank can print.

If passed, the vote would also force the central bank to convert a fifth of its assets into gold and repatriate all of its overseas bullion. Recently disclosed data reveals that almost a third of the country’s gold reserves are kept overseas, in Britain and Canada.

© Sputnik / Vitaliy Bezrukikh
Gold Repatriation from US to Result in Higher Gold Prices, Weaker Dollar: Broker
The ballot would also require the Swiss central bank to buy large amounts of gold from the global market in order to transform their currency to a gold-based standard.

Experts however give their own reasons against the proposed initiatives.

Regarding the decision, the Bank of Singapore's chief economist Richard Jerram said, "There was a survey from the University of Chicago…they surveyed 40 economists in the US, and 100% of them said the return to the gold standard is a bad idea. The only thing they disagreed about was that some of them thought it was just a bad idea, some of them thought it was a terrible idea," Channel NewsAsia reports.

Fixing the money supply to the amount of gold the central banks hold, the website explains, takes away their ability to respond to a crisis. Therefore, when the economy worsens, central banks would not be able to respond with measures such as quantitative easing. A recession can easily become a full-on depression.

If you have a Gold Standard and gold production cannot catch up with economic growth, the news website explains, prices will have to come down, creating what is known as deflation. In this situation, consumers would put off spending and companies stop investing — much like what happened in Japan for the past 15 years.

The next question is then, where can the country buy so much gold, and at what price? Also, Switzerland has pegged its franc to the euro to defend its economy. But if the central bank is no longer able to print money while the European Central Bank does, the peg would go and the franc would strengthen. This would have a potentially profound effect on the nation’s economy, which relies heavily on exports, making Swiss products more expensive.

Early projections are due at around 11:30 GMT after polls close, with the final results expected by about 16:00 GMT.

According to Switzerland's system of direct democracy, the initiatives approved in such votes must be written into law within three years, regardless of how unpalatable they are to policymakers and the business community.

The latest polls, however, suggest that the proposed measures are unlikely to pass.