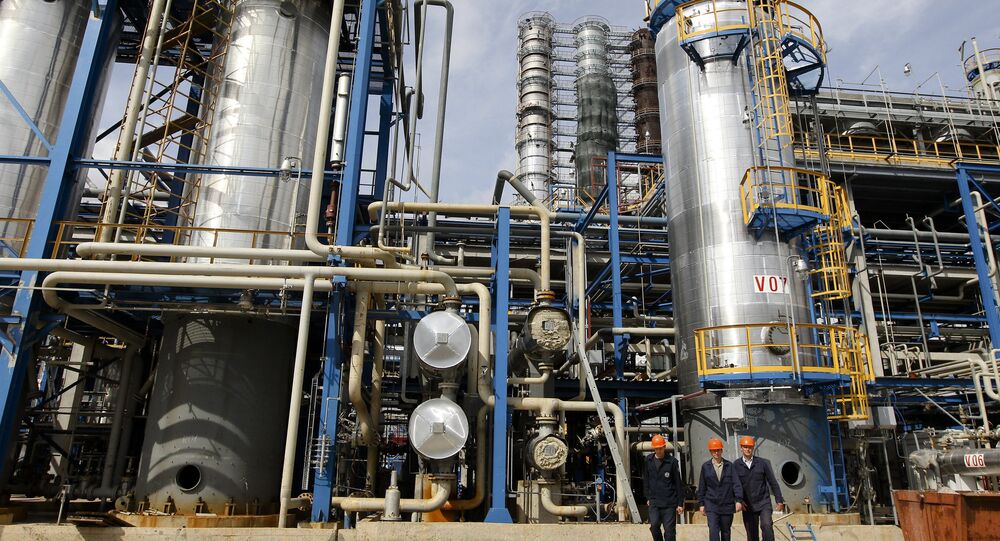 The United States and Saudi Arabia may have conspired to keep crude oil prices down in order for the US to be in charge, according to the former first deputy chairman of the Russian Central Bank.

"[The US] is about to get the upper hand in the market, and it warned Saudi Arabia it'd better change its pricing policy if it wanted to keep its share of the market. Saudi Arabia took the cue that controlled oil price slashing was the best option," Oleg Vyugin, who now chairs the board of directors at Russia's MDM Bank, said.

Vyugin added that if crude prices continued their climb beyond $100 a barrel, US oil production would surge to more than 10 million barrels a day, topping that of Saudi Arabia and Russia, while the median price of $70-80 a barrel would lead to US energy companies putting their oil production projects on hold.

According to the economist, the trade-off between the two key oil producers would allow Saudi Arabia to dominate the energy market, while the United States would use lower oil prices to promote its political agenda.

"This policy curbs US oil production and lets Saudi Arabia keep its market," Vyugin opined, adding "as for Russia, it is a passive player, so what will be with it, will be."

"[The US] will cap oil production because of the low prices, while $80 per barrel will allow Saudi Arabia to stay afloat in terms of budget obligations, at least for the next couple of years, because their budget is balanced at this price and has almost a trillion dollars in reserve funds," the former Central Bank deputy chairman said.

Vyugin stressed that a deeper slump in oil prices would, on the contrary, hurt the United States, Saudi Arabia and the Organization of Petroleum Exporting Countries (OPEC), meaning the price was likely to be no less than $70 to $80 a barrel. An adverse scenario, he said, could prompt oil producers to cut production quotas.

"It will not benefit the OPEC member states, so they will probably cut quotas," Vyugin told Sputnik.

Russian Economic Development Minister Alexei Ulyukayev said earlier he expected global oil prices to stabilize at $90 per barrel in the medium-term, although there could be a short-term fall in prices in 2015.

This comes as the Russian currency on Friday set a new record, trading at 48.65 to the dollar and 60.27 to the euro. On Monday, the Central Bank predicted zero GDP growth, assuming oil prices would not drop below $90 per barrel.

The Russian national currency will eventually exit from the dive it began back in June and emerge stronger, the former first deputy chairman of the Russian central bank told Sputnik.

"Will it hit rock bottom? It will eventually, but the process will be difficult because the Russian market is organized in a wrong way, in which exporters provide foreign currency and investors don't buy Russian assets," said Oleg Vyugin, who now chairs the board of directors at MDM Bank, Russia.

The economist did not rule out the Central Bank intervention to support ruble and "punish" aggressive dollar buyers if it sees a threat to the country's financial stability.

"The currency market will then enter a corridor of volatility and further rates of ruble growth or depreciation will depend on oil [prices] and politics. The more predictable these factors are, the less volatile the ruble exchange rate will be," Vyugin told Sputnik.

The pundit said that the current exchange rate of ruble measured against foreign currencies would still be enough to cover Russia's external debt.

"Today's [exchange] rate against the dollar and euro can support the balance of payments that ensures debt payments, meaning that imports are likely to drop so low in the next few days that the oil price of $82-85 a barrel will provide enough gains to cover all the debt," he explained.

Vyugin added he believed the ruble could eventually stabilize even without the Central Bank's involvement as soon as purported speculators in the global Forex market decide to pull out of a scheme to capitalize on the leaps in ruble's exchange rate.

"The future scenario, as I see it, is that the ruble will be weakened until someone appears in the market, or maybe a big speculator decides to reap the profits from selling huge amounts of dollars and leaves. At that point the ruble will get stronger again," Vyugin suggested.

The Russian national currency set a new record on Friday, trading at 48.65 dollars and 60.27 euros. On Monday, the country's Central Bank predicted zero GDP growth, assuming oil prices would not drop below $90 per barrel.