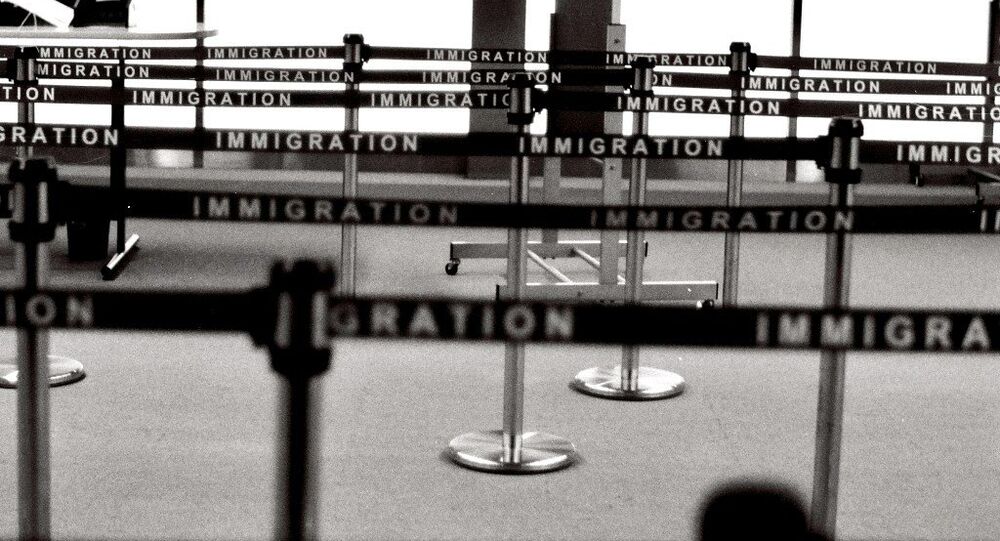 Beyond Inclusion & Exclusion: Is Immigration a Right or Entitlement?

At the holy name of ‘Human Rights,’ every knee shall bow, and every tongue confess, that ‘Our Common Humanity’ is Lord.

But even metaphysical thinking has its limits!

At least, whenever we take upons ourselves the courage to descend from the glorious heights of idealistic fancy to the far-from-Utopian mud and clay of reality.

Consider these two theses with your usual critical eye:

There are sound arguments for allowing a substantial degree of immigration to countries with a relatively high level of economic development.

There are also sound arguments for having a well-regulated, effective and efficient immigration system.

© AFP 2020 / PAUL J. RICHARDS
Immigration Ban? Hundreds of Refugees Set to Arrive in US This Week
No matter what anyone tells you, this is not a zero-sum game between two radical contradictory theses. A true liberal, rather than a social justice authoritarian, will tell you that just as ideas and ideologies do not have rights, nor do they have interests. But even if they did, the ‘interests’ of theses 1 and 2 could hardly be said to be in any kind of mutual contradiction here.

In fact, a high degree of immigration actually necessary entails, practically speaking, an effective system; or at the very least, it should do.

However, those who sever these two ideals will often say: ‘immigration is a right!’ I am, of course, very much aware that the notion of a ‘right’ has become inflated over time; the boundary between rights and entitlements is often blurry, if not completely indiscernible.

So, if someone says they have a right (an inalienable right to freedom of speech), this is supposed to rhyme with having a right to the internet, rather than an entitlement.

(Please don’t think this is a strawman argument. There are actually people who think access to the internet is a right; the United Nations Human Rights Council for one, as far back as June 2016! Do of course be aware that Gizmodo is not a satire site)

© REUTERS / Larry Downing
CIA Tries to 'Edit the Past' With Release of Declassified Documents on Internet
Yet, if internet access is a right, then presumably, people lacking access to it is a ‘breach of human rights.’ If this is so, then if there are any countries where internet access for individuals ‘inadequate’ by any presumably rather contingent standard, then the government are ‘human rights abusers.’

Of course, people may say this is a strawman, and that the recommendation is about censoring or clamping down on the internet, and (see the article I just linked to above and make up your own mind). But I would actually argue that presenting non-confiscation of internet access as some kind of 'right' a potentially very serious gesture in the direction of making the non-presence of internet access a legitimate cause of grievance too.

And isn’t that a deeply, deeply dangerous slippery slope?

Well, with that peril in mind, let us return to the matter of immigration being considered an entitlement and not a right.

If immigration is an entitlement, anything that is necessary for human survival would have to be a right as well, as these are even more fundamental interests or human benefits than immigration: food, water, shelter. But it is deeply problematic to call access to scarce and finite material resources a ‘right.’

This, of course, is not to say anything about the legitimate or illegitimate role of governments, business or civil society in securing and facilitating access to such resources. I am certainly not laying down the law on whether or not such crucial human goods cannot and must not ever, in any case at all, represent a legal entitlement. But whether such resources can or should be entitlements or not (leaving this question fully open here), they certainly cannot be reasonably considered to be rights.

After all, the White Man’s Burden will always tell you that ‘the natives’ are backward, oppressive and barbaric.

And swelling the number of basic rights beyond due measure will surely not help with this mitigating this ethnocentric attitude.

© Sputnik / Vladimir Fedorenko
European Human Rights Defenders at Center of Corruption Claims
For after all: who can deny that many countries in the world are already damned in the eyes of racially, nationally and otherwise privileged ‘humanitarians.’ Big Human Rights has been, and is, and shall remain for a considerable time to come, a deeply serious and substantial threat to the peace and wellbeing of innumerable human individuals.

Do the self-appointed Party of Humanity really need more ammunition?

And sadly, I am really not at all so sure that the notion of ‘ammunition’ is most properly understood as figurative here…

After all, I am quite sure the Military-Industrial Complex and the Party of Humanity (not the authentically classy head-choppers of Paris, but the faux-sophisticated kindergarten bombers of Washington) will not have any difficulty finding a good way to make use of any new manifestations of the curious and disturbing phenomenon ‘rights proliferation’ in the near future.

And so, once more, the incessantly impetuous and idiotic arms race of inalienable human goods and benefits is surely a race to the bottom…

But in the meantime?

No, immigration cannot be a right.

Immigration must be an entitlement. Calling it a right can only mean one of two things.

Either the word ‘right’ means that immigration is an inalienable right, and not an entitlement; which leads, not so much to the liberalization of existing immigration systems, but to the abolition of all borders as the only logical conclusion consistent with the premise; given that an inalienable right is one that cannot be denied to anyone, under any circumstances.

© AP Photo / Petr David Josek
Europe Cannot Criticize Trump's Migration Policy as EU Builds Own Walls - Rome
As for the latter case, it is not Utopian because it is ‘bad’ in the abstract for people to migrate (that would be a clear untruth); but rather, because the abolition of all borders is not remotely practical; at least not for any nation-state in the world that I know of today.

On the other hand, if calling immigration a ‘right’ doesn’t signify an inalienable right as such, but rather, pretty much everything and nothing, then it can only be presumed that one is dealing with some kind of cowardly, Jesuitical sleight of hand…

Or perhaps a complete innocence of political philosophy and of the basic textual foundations of the history of political science.

And is that really any better?

Yes, there is no need to make ‘Fortress USA,’ or ‘Fortress Europe.’ However, calls for liberalization of the immigration system must be based on practical thinking and on trade-offs; and never once on solutions-based thinking. There is absolutely no inalienable “right to migrate” whatsoever.

However, even so, the question of how to manage the entitlement of immigration in an equitable and accountable manner is a truly important consideration; not least because it is important not to throw the baby out with the bathwater, by inciting some kind of Quixotian backlash against immigration that is no less idealistic and ‘solutionist’ than the idiotic sentimentality of rootless cosmopolitans.

But I very much doubt that either the Party of Exclusion or the Party of Inclusion have much of serious theoretical or practical substance to add to the discussion.

However you slice it, a false choice is being presented. If the futile, naïve and sentimental moral absolutism of inclusionism and exclusionism is utterly untenable, so also are the warring (but likewise highly mutually complicit) dogmas of two factions of fools:

Those who blindly worship lines on a map, and those who superstitiously venerate the map itself.

I don't see why anyone needs to be naive about all of this.

Never forget that wherever you have a pair of nonsensical and indeed borderline meaningless ideas that are clashing with each other, you will never fail to find a couple of over-ambitious Wizards behind the curtain.

Deniers of the Nazi Holocaust and Apologists for the Marxist Gayssot Law.

And last, but not least (in vitriol or in idiocy… or, indeed, in outraged virtue!):

However, John Stuart Mill has quite correctly pointed out that one person with a conviction is a greater force for good than 99 talented mediocrities.

Look behind the jargon.

You are not being asked to choose between the better or worse of two ideas.

You are being asked to choose between two pitiful, craven, cowardly interests.

You will refuse the bargain.