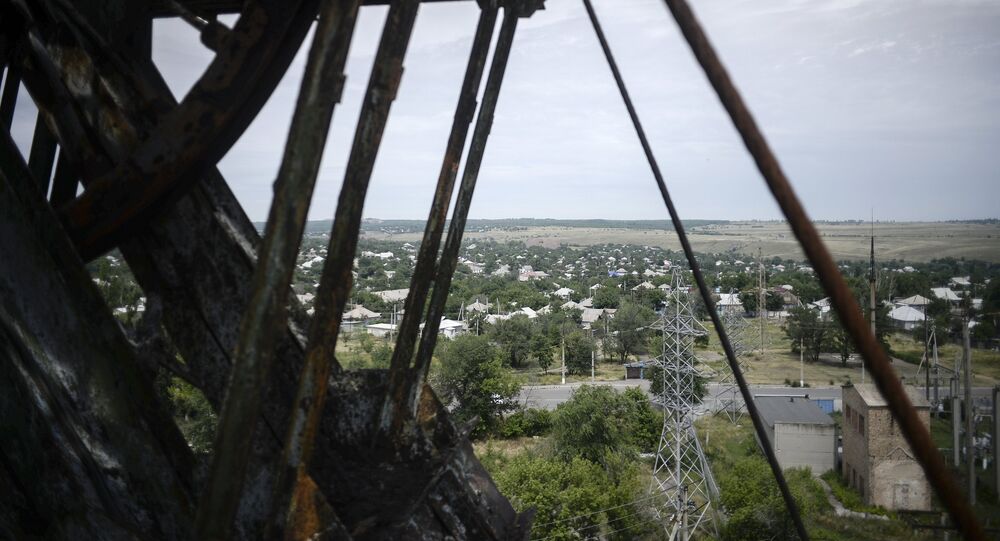 A Firsthand Look at Small-Town Novorossiya

During the May holidays Russians set aside to commemorate labor day and their victory in WWII, I visited a small town in the Lugansk People's Republic, where the ongoing struggle for independence resonated among the locals celebrating the holidays.

I was invited to the Fourth Annual Antifascist Forum in the city of Krasnodon in the Lugansk People's Republic. As an active supporter of the people of Novorossiya, it went without question that I should visit this place and personally express my solidarity with them, while getting the chance to observe with my own eyes what's going on here.

© Sputnik / Mikhail Voskresenskiy
Ukrainian Forces Intensify Military Activity in Lugansk Region - LPR
When we arrived in Krasnodon, I expected to see what one imagines when picturing a community during war-time, but instead I witnessed a small, calm, provincial town, with lovely, friendly inhabitants. Strangely enough, I felt even safer here than in my hometown.

On the 2nd day I attended the anti-fascist conference, where people from all around the world met to discuss what could be done to counter the information war against Novorossiya. We asked how we could show the Western public that normal people live here, not 'terrorists', and that was a normal desire for a region to part ways with a country where people could easily be burnt alive while on vacation and then cynically blamed for it, a country that had started to use base, inhuman propaganda in the best tradition of Goebbels against its own citizens simply because it wanted to unite with the West.

Ukraine did this despite the West's history of seeing Ukrainians as slaves, despite the countless lives taken by Hitler's army, and despite the West's role in ruining the USSR and installing an oligarchic regime whose draconian neo-liberal policies thrust millions of hard-working people into poverty in the 1990s.

Ukraine one day decided that the welfare of its own citizens meant less for it than its misguided obsession with joining the West. So we shouldn't be surprised that the people of Donbass decided to leave.

But of course I can talk about that situation at length, so I will come back to the conference.

Of course, at the conference we met self-defense forces' fighters. The first thing that I took note of was their international character: you could see different nations represented here, from US citizens to people from India. Therefore, stories about "fascist Novorossiya" seemed strange too. The fighters were really open and friendly; they invited us to visit their office. It reminded me again that they are just ordinary, naive people, who even after several years of war were willing to trust people they did not know and show them all their information, so I have no idea how can someone from the West could call them the 'regular Russian army'.

On the third day I had the opportunity to see Krasodon. It is an interesting town with a very impressive history: in this area, even children had played an active role in fighting the Nazis. Information about their WWII-era struggle could be found in the impressive Molodoy Gvardii ('Young Guard') Krasnodon Museum.

Do you know that during WW2, the Germans buried miners alive for refusing to work for them, and were only able to force them to do their jobs by using terror tactics? It is difficult to believe that people with such a heroic history and strong, blue-collar culture would be willing to live as a ridiculous colony of the West, as modern Ukraine is today.

People in the town didn't look like victims of war and they continued to live a normal life: to visit cafes, to hang out with each other, to work. Locals didn't have any desire to discuss Ukraine and they tried to show that this country no longer existed for them. A funny moment was when a bus driver spat chocolate after hearing that it was made by Poroshenko's company. I didn't see anyone who wanted to be part of Ukraine again.

© Sputnik / Alexei Danichev
Tens of Thousands Join Immortal Regiment Marches in East Ukraine
On my last day, I visited a victory parade in Krasnodon. It was impressive. The column of people was so huge that I couldn't see the end, despite the town being relatively small (70,000 people). Children's performances evoked painful emotions; obviously, experiencing the ongoing conflict had given them an indelible understanding of how terrible war can be.

I was only in Novorossiya for several days, but I was really pleasantly impressed. There, locals are surviving the tragedy wrought by Western aggression, but I'm certain they will prevail, as their grandparents and great-grandparents did in WW2.

Lugansk May Hold Elections in February Without Kiev's Participation