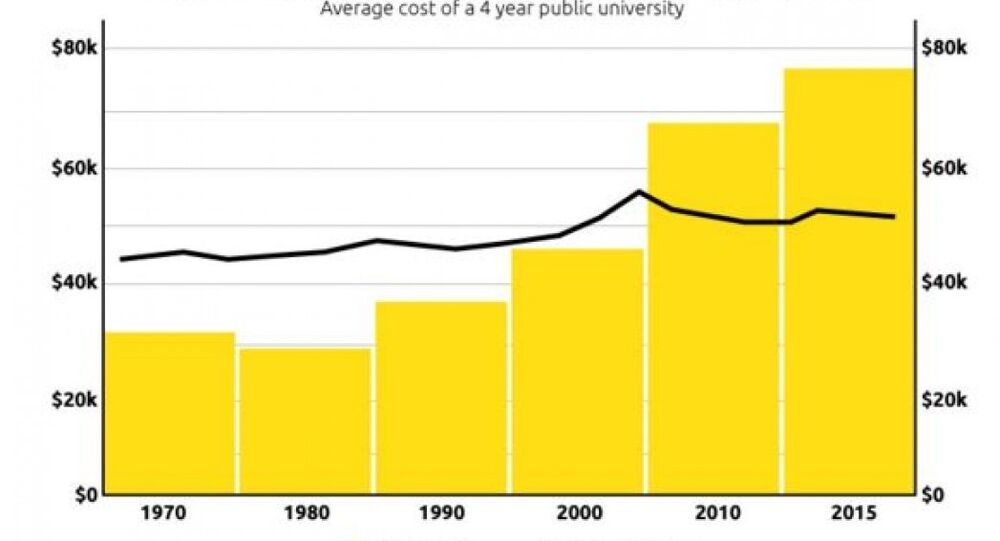 The Next American Crisis: Student Debt

US students are taking one excessive amounts of debt that most of them will be unable to pay upon graduating. The delinquency rate is already almost 12% and as the economic landscape is destined to worsen in the years to come, the delinquency rate will soar.

Calamities are of two kinds: misfortune to ourselves, and good fortune to others. Ambrose Bierce

The student loan crisis will make the 2008 financial crisis seem like a sweet dream in comparison.

Student debt is increasing at the rate of almost $3000.00 per second; this is stunning considering that education tour system does not even rank in the top 10 globally. Russia is ranked at number 5, 13 positions higher than the US.

Is that not a shame for a nation that is supposed to be a 1st world country? Worse yet, it indicates that colleges are simply forcing young individuals to take on mind-boggling amounts of debt in the hopes of landing a good job when they graduate.

Getting a student loan is about as easy it was to get a loan during the booming housing market cycle and look how that story ended.

All you had to do was be able to scratch an X on the signature line, and you would qualify for a loan that most had no hope of every paying back. Now college’s keeping increasing tuition rates while the Job market is far from rosy. College students are graduating today with an insane amount of debt on their hands. Wages as a whole have been dropping instead of rising over the past decade when inflation is factored into the equation.

Must read: House of Saud sending troops to their death if they engage Iran in Syria

Students are taking on too much debt, with almost no hope of being able to pay it back.  The student loan portfolio is set almost to double by 2025 to almost $2.5 trillion by 2025.

Already almost 12% of individuals are delinquent on their student loans, and given the far from bright job outlook most students face after graduating; this trend will only accelerate in the years to come. The chart below seems to confirm this assertion. The cost of four-year education versus median income shows that tuition rates are increasing at a far faster pace than median income. Since 2000, the cost of 4-year education has surged by almost 65%, yet median income keeps declining; this is an unsustainable trend and eventually it will lead to another disaster.

Is there a solution?

Well, one solution would be to make it harder to qualify for loans, which in turn would cut down the number of available students willing to pay exorbitant rates for substandard education.  This, in turn, would force colleges to compete for students and as we know that competition is the best way to lower prices.  However, this will not happen soon. We live in an era where money is thicker than blood; the can will be kicked further down the road until there is no road.  When the road ends, though, the consequences could be extremely far reaching and will most likely make the subprime mortgage crisis look like a walk in the park.

In such an environment book publishers should fare well over the long run. Some companies worth paying attention to are SCHL and AMZN.  Yes, AMZN sells more EBooks than print books, and it sells a massive amount of them.  If you are looking for a children’ book publisher than EDUC is quite strong; on a relative strength basis, it is stronger than both AMZN and SCHL. The overall strategy should be to wait for strong pullbacks before deploying any new funds into these companies.

Lastly, it appears that Gold is set to put in some sort of bottom; a small confirmation that a bottom is in place would be a monthly close above $1200.  Hence, it makes sense to put some money into Gold bullion, even if only to take some insurance against a future catastrophe; the downside is limited from here.  We are referring to bullion only (Gold, Silver and Palladium).

This article was provided courtesy of the Tactical Investor