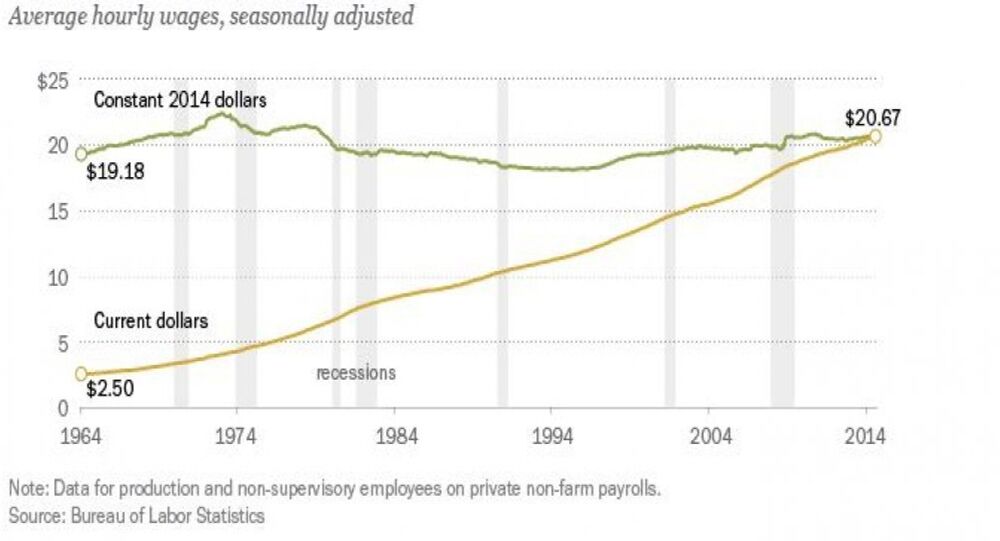 Real wages when adjusted for inflation have been declining for decades and the pain has increased significantly over the past few years.

$4.03 earned in 1973 has the same purchasing power as $22.49 today. The speed at which the Middle Class has fallen apart since the financial crisis of 2008 is terrifying; at this rate, the Middle-Class in the U.S might soon be referred to as endangered species

To add insult to injury, when these wages are adjusted for inflation, they have the same purchasing power they did in 1980. This means that today’s wages are totally out of sync with current prices.  Owning a house is now out of the reach for most Americans, and perhaps this is why this nation is moving towards becoming a nation of renters.  A salary of $4.03 an hour, in 1973 has the same purchasing power as roughly $23.00 (to be exact the figure is $22.41).

When we look at the weekly earnings of the average worker in the US the picture at first glance, appears to be quite good.  Since 1973, average weekly earnings have increased from $232 to $782, and that appears to be a big move in the right direction. However, when you factor, ugly old inflation into the equation the outlook changes and real average weekly wages have hardly budged since 1980. Everything else has, it costs more to go to college, more to buy food, more for gas (despite the drop in oil prices), more to visit the doctor and significantly more to buy a house.

This economic recovery is nothing but an illusion, and while Americans are earning more money, their spending power is declining.  Thus, they are working longer hours and taking home less pay; this is a recipe for disaster as it means that most Americans will not be prepared for their retirements. Social security is simply inadequate; as the government has rigged the system, any social security payment increases will be minimal and not enough to offset the effects of inflation.  The BLS uses a rigged basket of goods to measure inflation and based on this basket; retirees will have less money to buy the goods they desperately need with the passage of each year.

This chart below clearly illustrates how despite a low unemployment rate of 5%, real wages are dropping and not rising.

There are many factors at play here that are contributing to lower wages, but the prime driver appears to be corporate greed.  They are using billions of dollars to buy back shares instead of investing and growing their companies. When you buy back shares, you artificially boost the earnings per share metric (EPS) and it is done without any hard work. As rates are very low right now, corporations can borrow money for next to nothing and use these funds to buy back their shares and in the process magically boost earnings.  This is done without spending money on new equipment or hiring new workers. It is fast, simple and fraudulent but the government is not prosecuting anyone so this trend will continue. We covered this recently in an article titled “share buybacks just another Wall Street Scam.”

Then we have other trends as noted by Peter Cappelli, a professor at Wharton School of Business.  He states that many retailers base manager’s bonuses on whether they can keep labour costs below a certain level. If these managers blow the budget ceiling, they blow their bonuses away too.

“They’re punished to the extent they go over those budgets,” Professor Cappelli said. “If you’re a local manager, and you’re thinking, ‘Should we bump up wages,’ it could really hit your bonus. Companies have done this in order to increase the incentive to hang tough on budgets, and it works.”

As a result of these actions, the percentage of corporate income going to workers has dropped like a rock and is now at the lowest level since 1951. The Economic Policy Institute has stated that the labour’s share of corporate income has cost workers $535 billion annually; put in another way it has cost $3,770 per worker.

There is only one way to win this filthy game, and that is for you take control of your finances. Do not trust Wall Street, Main Street or your government to take care of you.   Learn how to use Mass Psychology to be on the right side of the markets and how to make sure you do rot in your Golden years.