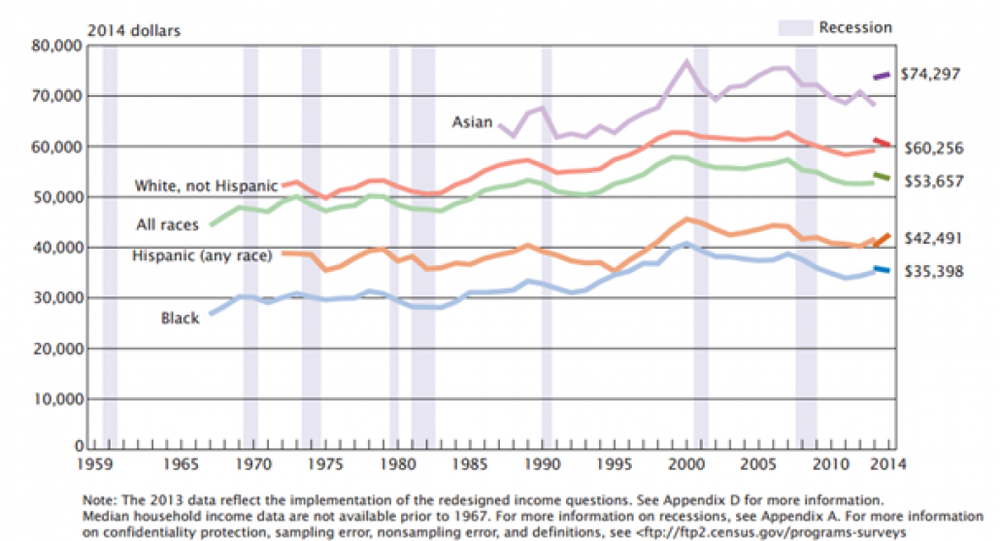 The middle-income squeeze: Americans work harder but take home less money. Today’s salary of $22.41 per hour is the equivalent of $4.03 an hour in 1973. This clearly shows you how salaries are not going up but actually declining.

This chart clearly illustrates that median household income has been declining over the years, despite big claims from the BLS that more people are working and that the economic outlook is improving. How can the situation be getting better, if people are working longer hours and taking home less pay? In fact, since 2000, household income for every race has been dropping. This is not what an economic recovery should look like. This is more like an economic illusion.

Some facts to consider

The recession has not ended at all. The massive rally in the stock market is just masking reality. Most individuals are too poor to invest in the stock market, and this is why more Americans drink coffee today as opposed to owning stocks. Maybe they are not too poor to invest, but they certainly think so and hence avoid the markets. Additionally, while the salaries appear to be rising when inflation is factored in, people are working more for less and are having a hard time making ends meet. This is why there are so many individuals on food stamps and why the number of families requiring financial assistance ahs continued to soar year after year during this so-called economic recovery.

This article is provided courtesy of the Tactical Investor, where psychology and technical analysis intersect seamlessly.