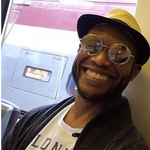 Jamarl L. Thomas is the one-stop-shop for honest, nuanced, and incandescent analysis of news, politics, culture, philosophy, foreign policy, and yeah, UFOs! He offers a refreshing viewpoint from the left without allegiance to anything other than a herculean attempt to discern the ‘truth” of a situation.

Jamarl was the firstborn of the family and raised in Richmond, Virginia on August 31st, 1977 at exactly sunrise, 6:35 am. Jamarl dominated the Richmond chess scene for decades, often winning adult tournaments despite being in middle and high school. Jamarl proudly earned a Bachelor's Degree in Holistic Nutrition from Clayton College of Natural Health, a Bachelor’s of Science from New York Institute of Technology, an Associates Of Science from J. Sargeant Reynolds Community College and a Certificate in Computer Programming and Software Applications from ECPI Technical College. During this time, he experienced a modicum of transient success in writing. Several of his poems were appropriated for poetry journals and books. He also wrote, published and hosted a book review for his book of poetry, “Inner Sightings” at Books A Million.

Adding to the list of what he considers a success, dare one say pride - despite the chronic illness (renal failure), Jamarl refused to let it dictate the terms of his life. Since the diagnosis, in addition to multiple major surgeries after, he has traveled the world, has been skydiving, white water rafting in the James’, bungee jumping near Tibet in mountains of Nepal, zip-lining through a mountain range in Puerto Rico, and of course, the most venerated task of them of all, marrying his beautiful wife in the shadow of an active volcano in Iceland. He would say, “Limitation is part of life, the goal is to figure out how to work between the lines to accomplish the overarching objective without dying or losing in the process. Cowardice compels no leverage and bravery has a long list of dead signatories that got it wrong.“

The latest stage of Mr. Thomas’ life has him running a marginally successful YouTube channel with over 30,600 subscribers and over 9 million views. This is in addition to landing a greatly esteemed position as host of the experientially best and technically regarded flagship program of Radio Sputnik’s network, Fault Lines with his indomitable co-host, Shane Stranahan!