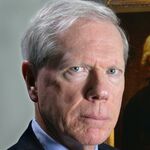 Paul Craig Roberts was Assistant Secretary of the US Treasury in the Reagan administration. He was professor of economics in several universities and Associate Editor of the Wall Street Journal. He was a member of the US-USSR student exchange program in 1961, and addressed the Soviet Academy of Sciences in 1989 and 1990. His first book, Alienation and the Soviet Economy, was published in 1971. His website is www.paulcraigroberts.org.
All Articles
Get more