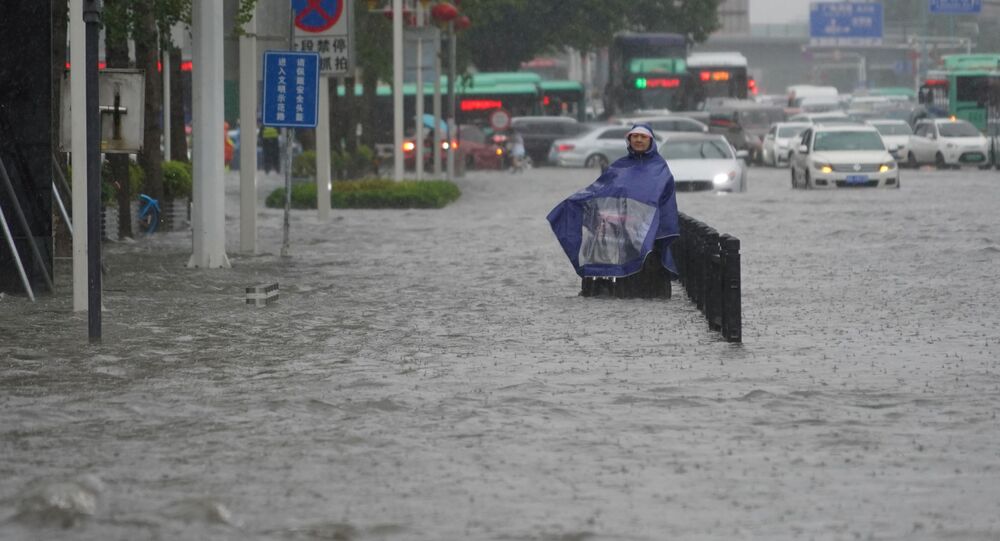 During China's rainy season, floods are a frequent occurrence, causing annual destruction and washing away highways, crops, and homes. However, the threat has grown over time, partially due to the extensive construction of dams and levees that have cut connections between rivers and lakes and altered floodplains that had helped absorb the surge.

A dam near the city of Zhengzhou in central China's Henan province has been destroyed by heavy flooding, after being seriously damaged in heavy storms that killed several people and brought the region to a halt, local media reported.

Prior to the collapse, the Chinese army warned that the crippled dam "could collapse at any time."

Earlier in the day, state media reported that the army sent about 20,000 personnel to carry out emergency work to preserve the integrity of the dams.

More than 20,000 soldiers and armed policemen are working on the dams of the Yellow River and Changzhuang Reservoir to prevent river burst. Water level is decreasing now but dam pressure remains. #Zhengzhou #Henan #floods pic.twitter.com/fjfJhWrQsM

According to Xinhua News Agency, the meteorological bureaus of Henan and Zhengzhou have raised the level of emergency response to meteorological disasters to the first level. The Chinese media report that the subway in Zhengzhou was flooded, and rescuers evacuated blocked passengers.

Earlier it was reported that at least 12 people died in the province due to floods caused by torrential rains. Around 100,000 residents have been evacuated in the province so far. More than 6,000 military and fire service personnel are involved in rescue operations. Zhengzhou Airport has canceled flights until Wednesday.

Over the weekend, due to severe rain, two dams in Hulun Buir City in North China's Inner Mongolia collapsed. Fortunately, however, no injuries have been reported.

Dramatic collapse of Xinfa embankment dam in northern #China due to overtopping that happened yesterday. Note how quickly dam is washed away! This is despite the dam has a large-capacity chute-type spillway and a bottom outlet which acts as an emergency spillway. See photo below. pic.twitter.com/sQLdfTvPAw

Since July 16, more than 144,660 people have been affected by torrential rains in Henan Province, with 10,152 being moved to safer areas, according to the provincial flood control and drought relief headquarters cited by Xinhua.