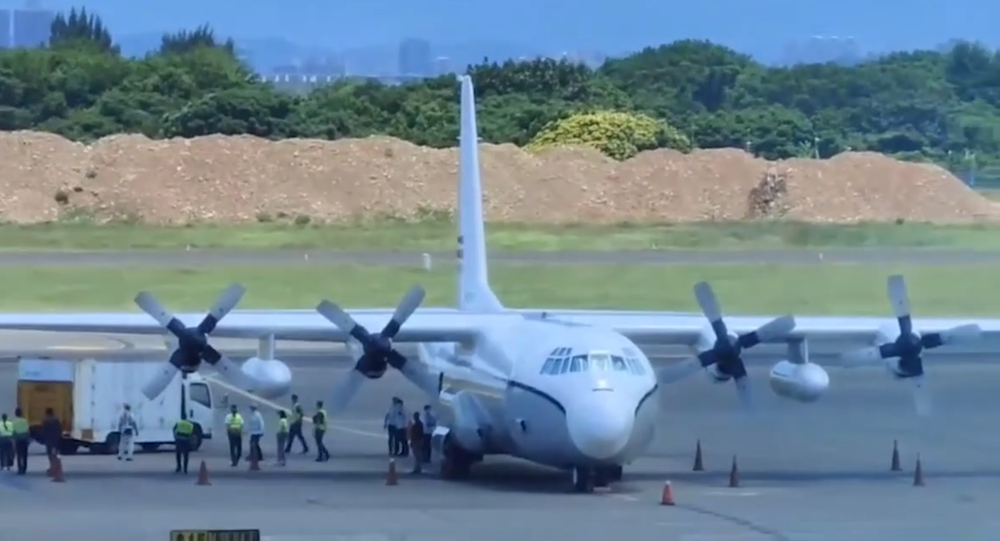 The US Central Intelligence Agency (CIA) has long relied upon civilian-appearing charter planes to keep its operations hidden, such as its clandestine support for UNITA during the Angolan Civil War and, more recently, operations against Al-Shabaab in Somalia.

On Monday, a second US aircraft likely owned by the CIA landed on Taiwan, just days after a US Air Force aircraft did the same, drawing condemnation from Beijing. Such bold moves, which China regards as territorial violations, have become increasingly common in recent years.

Just after noon on Monday, a US aircraft flying from Ninoy Aquino International Airport in the Philippines touched down at Taoyuan International Airport outside Taipei. According to the Taiwan-based Liberty Times, the aircraft is carrying “diplomatic pouches” for Sandra Oudkirk, the new director of the American Institute in Taiwan, the US’ de facto embassy there.

​The aircraft is a civilian version of the US military’s ubiquitous C-130 Hercules cargo plane, which is also called an L100-30. This one, with the registration number N3755P, is owned by an aircraft charter company called APA Leasing and operated by H&T Airways - in fact, it’s the only aircraft this supposed “airline” operates, and it’s widely held to be a front for the US Central Intelligence Agency.

The aircraft N3755P has been spotted under lease by other CIA fronts, too, including in late April, when it flew from Colombia to Haiti under charter by Tepper Aviation, which has operated CIA aircraft over Iraq and Somalia as well.

Monday’s visit comes just days after another US aircraft, a C-146A Wolfhound cargo plane, also visited Taiwan. The USAF aircraft flew from the US’ Kadena Air Force Base in Okinawa, Japan, on July 15, and brought another parcel to Christensen in Taipei.

The visit aroused anger in Beijing, being just the latest in several US aircraft visits, including by high-ranking US officials.

​"Any foreign military aircraft are forbidden to land on China's territory without the approval of the government of the People's Republic of China (PRC), and any unauthorized entry into China's territorial air space by foreign military vessels and aircraft will lead to serious consequences", Senior Colonel Wu Qian, a spokesperson for China's Ministry of National Defense, said in a Saturday statement.

"China must be and will be reunited. No one should underestimate the resolve, will and ability of the Chinese people to defend their national sovereignty and territorial integrity," Wu added.

Chinese media derided the action, and others like it, as “salami-slicing” tactics, meaning they are small provocations that individually don’t amount to a casus belli, but cumulatively amount to something more strategically decisive.

A day after the incident, the People’s Liberation Army practiced amphibious assault drills in which a heavy amphibious combined arms brigade conducted live-fire exercises on the southern coast of Fujian, a Chinese province directly across the Taiwan Strait from Taiwan. According to media reports, the drills involved Type 05-series amphibious armored vehicles being launched by Type 072A tank landing craft.

China Military
Amphibious armored infantry fighting vehicles (IFV) attached to a brigade under the PLA 72nd Group Army drive into the waters during an amphibious training exercise focused on subjects of basic driving, landing craft ferrying and assault wave formation, etc. on May 21, 2021

US Relationship With Taiwan

The government in Taiwan, formally called the Republic of China, is all that remains of the government formed in 1912 when the last Chinese emperor was compelled to abdicate the throne. However, in the civil war that ensued in the 1930s and 1940s, the communist Red Army triumphed, conquering the mainland and declaring a People’s Republic of China in Beijing in 1949.

With both governments claiming to be the sole legitimate representative of the Chinese people, each requires that countries recognizing them not have relations with the other. While the United States switched its recognition from Taipei to Beijing in the 1970s, it has maintained informal but open relations with Taiwan via the AIT, through which it has funneled military armaments and managed trade relations.

Just a handful of nations still recognize Taiwan as the government of China, nearly all of which are small island nations, US client states, or both.

In turn, another visit last month by a C-17 Globemaster III military transport brought several US senators, where they pledged in a ceremony to deliver COVID-19 vaccines to the island of 24.5 million.

In 2017, as former US President Donald Trump was coming into office, so was Taiwanese President Tsai Ing-Wen of the pro-independence Democratic Progressive Party (DPP). As US-Taiwanese relations reached their highest point since the 1970s, Beijing increasingly worried that it could provoke a declaration of independence by Tsai’s government, which the PRC has promised will lead to war, and thus has warned the US not to encourage the pro-separatist sentiments in Taipei.