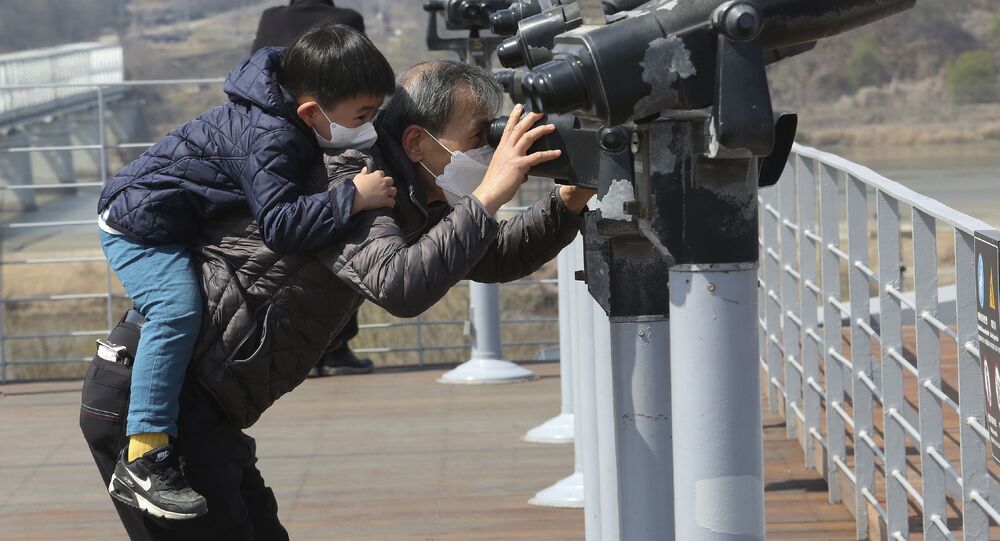 Earlier in May, South Korean media reported that North Korea’s leader Kim Jong-un banned skinny jeans and mullet hairstyles in the country, as he was reportedly afraid of foreign fashion influencing the local youth.

Young people in North Korea have been warned against using South Korean slang, with authorities urging them to speak the country's Pyongyang dialect, the BBC reports citing local media. Additionally, the public has also been warned against adopting certain hairstyles and fashion, and listening to K-pop music.

It's at least the second time when North Korean media has reminded people that not following the aforementioned advice can lead to imprisonment or even execution.

Back in April, the state-backed Rodong Sinmun newspaper said that the Pyongyang dialect is superior and that such Korean words as “oppa” ("older brother") must not be used by women when referring to their boyfriends – like people in South Korea do.

© REUTERS / KCNA
Kim Jong Un Dubs K-Pop a 'Vicious Cancer' Capable of Corrupting North Korean Youths
In December 2020, the Seoul-based North Korea Daily media outlet wrote about a new law introduced by the North Korean government in a bid to further strengthen control over information from the outside world, such as news and cultural materials.

In January 2021, the NK Daily alleged it had obtained details about the new legislation and so-called “reactionary thought,” which introduced criminal punishment for consuming or distributing cultural materials from South Korea, including unregistered TVs, radios, computers, or other electronic devices. North Koreans caught indulging in South Korean media can be sentenced to between five and 15 years of hard labour.

Earlier in June, the New York Times reported – citing state media – that Kim Jong-un referred to K-pop as a "vicious cancer" that has the potential to corrupt North Korean youths with unsavoury "attire, hairstyles, speeches, and behaviours." North Korean state media also reportedly emphasised that K-pop and related forms of South Korean entertainment culture could make the DPRK "crumble like a damp wall."

Kim's relationship with K-pop has changed dramatically over the years. In 2018 he was among those who attended the concert of South Korean girl band Red Velvet in Pyongyang during their North Korean tour. However, things changed in April 2021 when the North Korean leader spoke about what he perceived to be "a serious change" in the "ideological and mental state" of North Korean youth.

In may, Kim reportedly banned skinny jeans and mullet hairstyles in North Korea.