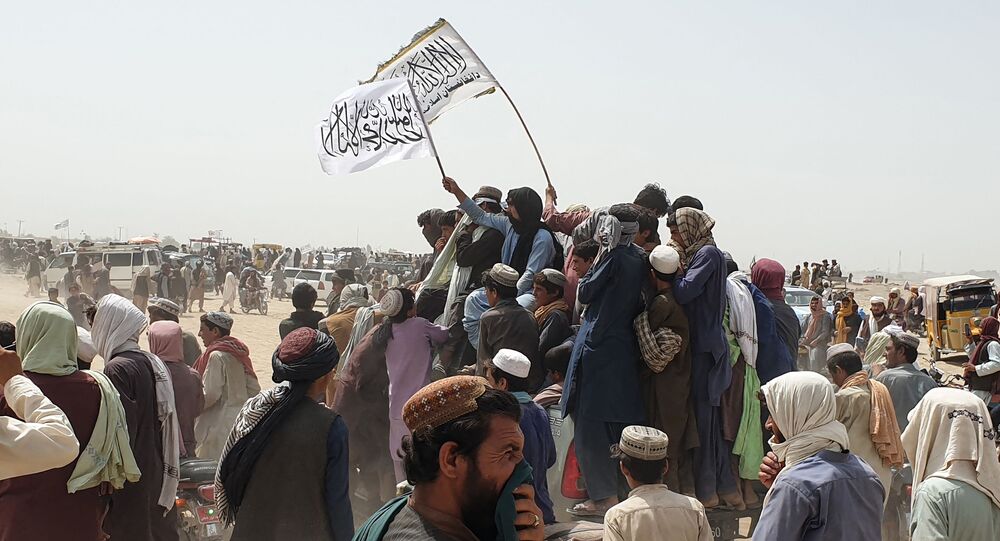 Pakistan has confirmed the Taliban* are now in control of the key border crossing of Spin Boldak. Why are the Taliban making advances in Afghanistan and what does it say about the quality of the US-trained forces they are facing?

Pakistan confirmed this week the Taliban were in control of a key border crossing at Spin Boldak.

It is one of Afghanistan's busiest border crossings and a main exit point for Afghan exports heading to Pakistan’s ports.

Taliban has destroyed 260 administrative buildings worth $500 million during its military offensive across #Afghanistan in recent months.

That’s a huge loss for one of the world’s poorest countries.

​The Taliban has mounted a major offensive across Afghanistan in the last few weeks as the US and other NATO forces are pulling their troops out, leaving President Ashraf Ghani with only his own US-trained forces to defend the capital, Kabul, and numerous strategic points around the country.

The Afghan National Army (ANA) has 180,000 troops and in February the US delivered 640 vehicles. including 403 armoured Humvees, to complement the 173 US-built armoured personnel carrier they have and 44 Soviet-era battle tanks.

Afghan Taliban announced the liberation of Kandahar’s Spin Boldak area and seized Pakistani currency from Afghan Intelligence officials. It was reportedly used for sponsorship of terrorism in Pakistan. pic.twitter.com/MSJoF2dn35

They have also ordered 143 Sikorsky UH-60 helicopters from the US but at this rate Kabul may be overrun by the Taliban before they arrive.

So why is the Taliban so successful and why has the ANA - supposedly trained by the elite of the US military - failed so spectacularly badly?

​The Afghan government claims neighbouring Pakistan is helping the Taliban.

On Friday, 16 July, the Pakistani Foreign Ministry rejected the allegations made by Afghanistan’s First Vice President Amrullah Saleh that Islamabad was obstructing operations along the frontier.

While there might be some truth in Saleh’s claims - Pakistan’s ISI intelligence agency has often been accused of sympathising with the Taliban and even protecting Osama bin Laden when he was in hiding in Abbottabad - it obscures the real reason for the dismal failure of the ANA.

Reuters journalist @dansiddiqui was killed while covering a clash between Afghan security forces and Taliban fighters near a border crossing with Pakistan, an Afghan commander said https://t.co/Uq33s4rI5Z pic.twitter.com/DL0XG3CAok

​The Taliban is an organisation which has high morale, a disciplined hierarchical system and a firm belief that it is waging a holy war against a government which is simply a stooge of foreign interests, notably the United States.

In April this year, the BBC interviewed the Taliban’s shadow mayor of Balkh, Haji Hekmat, who told them: "We have won the war and America has lost…Jihad is an act of worship. Worship is something that, however much of it you do, you don't get tired”.

"All imams and mullahs in captured areas should provide the Taliban with a list of girls above 15 and widows under 45 to be married to Taliban fighters". pic.twitter.com/t5XLjSIRNV

​President Ghani’s government represents a moderate form of Islam where other religions are tolerated, sport and music are allowed and most importantly women are entitled to be educated and work, and are not simply the tools of their fathers or husbands.

That is anathema to the Taliban.

NEW from @billroggio: Mapping the #Taliban Offensive in #Afghanistanhttps://t.co/fQCzt5RFjk

​Haji Hekmat told the BBC: "We want an Islamic government ruled by the Sharia. We will continue our jihad until they accept our demands".

The Taliban came to power in Afghanistan in 1996 when they ousted rival mujahideen groups - such as those led by Ahmed Shah Massoud and Gulbuddin Hekmatyar - from the capital Kabul.

Their attraction to the average Afghan was simple. They were not corrupt, they brought law and order to a chaotic situation and they did what they said they would do, even if it was brutal and often barbaric.

DG ISI’s response to Ashraf Ghani’s statements (official version) underlines the depth of problems between Kabul and Islamabad. There is little hope that the two sides will ever see any alignment of interests in the crucial months ahead. It is now an open war going beyond words. pic.twitter.com/mp2cYfHFUF

​They were ousted by the US-led NATO forces after 9/11 but they never went away.

In early 2002, they melted into the mountains but retained the support of many villages, especially in the south of Afghanistan.

Now that the US forces are pulling out, the Taliban are ready to make a push.

There are echoes of history with the situation in Vietnam in the 1970s.

Extremely distressing. In 6 months the Taliban will be back in power and Kabul will be like the fall of Saigon in ‘75. But not sure simply keeping troops there and delaying the inevitable - as evil as it is - is the answer either. If the Afghan Govt can’t stand on its own, when?

​The US withdrew its last combat troops from South Vietnam in March 1973 but left behind military advisers to train and guide troops loyal to the Saigon-based President Nguyen Van Thieu.

But Thieu’s government was corrupt and unpopular and was no match for the North Vietnamese Army and its allies, the Viet Cong, who were driven by a powerful mixture of nationalism and communist dogma.

On 21 April 1975, Thieu resigned and fled into exile and nine days later the North Vietnamese Army captured Saigon - since renamed Ho Chi Minh City - as American helicopters ferried the last of their diplomats and Vietnamese staff from the roof of the US embassy.

All the tactics of Ashraf Ghani's government are failing because there is a bunch of corrupt people and there is no public support at all.#AshrafGhani #hamidcarzai #Taliban

​With most of the US troops having now left Afghanistan, it seems 72-year-old President Ghani may be facing the final Taliban offensive.

Ghani’s government is riddled with corruption and the former anthropologist and university chancellor does not have the charisma or personal following needed to resist the Taliban.

Ironically, Ghani is a Pashtun, from the Ahmadzai clan - as was President Mohammed Najibullah, the leader of the pro-Soviet government who ended up hung from a lamppost in Kabul by the Taliban.