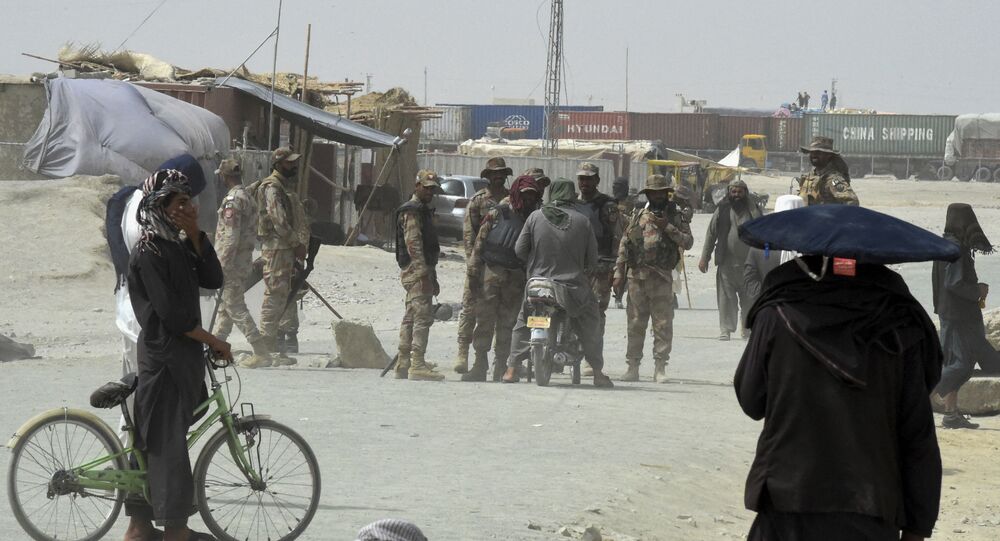 At a meeting between Pakistan Foreign Minister Shah Mahmood Qureshi and his Afghan counterpart Mohammad Haneef Atmar on the sidelines of the SCO-Afghanistan Contact Group this week, the Afghan diplomat asked Islamabad to close down Taliban* sanctuaries and cease funding to the radical Islamist group.

The Afghan National Security Forces (ANSF) on Friday regained control of the border town of Spin Boldak from the Taliban, Afghan government sources confirmed to Sputnik.

The town in Afghanistan’s Kandahar Province, near the border with Pakistan, was seized by the Taliban on 14 July (Wednesday), marking the first time in 20 years that it had fallen to the Islamist group.

Videos on social media showed Afghan troops being given a rousing welcome on entering the town.

Another social media user posted a video claiming that the Taliban fighters fleeing the fighting were being "received" by Pakistani troops on the other side of the fenced border.

​Meanwhile, newswire Agence France-Presse (AFP) reported that scores of Taliban fighters who had been injured during combat with the government forces, were being treated at a hospital in the Pakistani town of Chaman in Balochistan province. The hospital is just across the border from Spin Boldak.

​The Spin Boldak-Chaman border crossing connects the towns of Wesh in Afghanistan’s Kandahar province and Chaman in Balochistan. Nearly 70,000 people are said to use the crossing every day.

The Taliban's official spokesman Suhail Shaheen couldn't be reached for a comment.

However, Syed Agha, a local Taliban commander, has rejected the claim. "The town is under complete control of the Islamic Emirate (of Afghanistan)," he told Sputnik.

Earlier in the day, another Taliban spokesman, Zabiullah Mujahid, posted a video of Taliban fighters guarding a street in the border town.

Breaking: Pakistan air force has issued official warning to the Afghan Army and Air Force that any move to dislodge the Taliban from Spin Boldak area will be faced and repelled by the Pakistan Air Force. Pak air force is now providing close air support to Taliban in certain areas

​Islamabad has rejected the allegation and has instead accused Kabul of “undermining” Pakistan’s sincere efforts to participate in an “Afghan-owned and Afghan-led solution”.

“In spite of very close border operations normally not acceded to by internationally accepted norms/standards/procedures, Pakistan took necessary measures within its territory to safeguard our own troops and population,” a Pakistani Foreign Ministry statement said in response to Saleh’s allegations.

*The Taliban are terrorist organisations banned in Russia