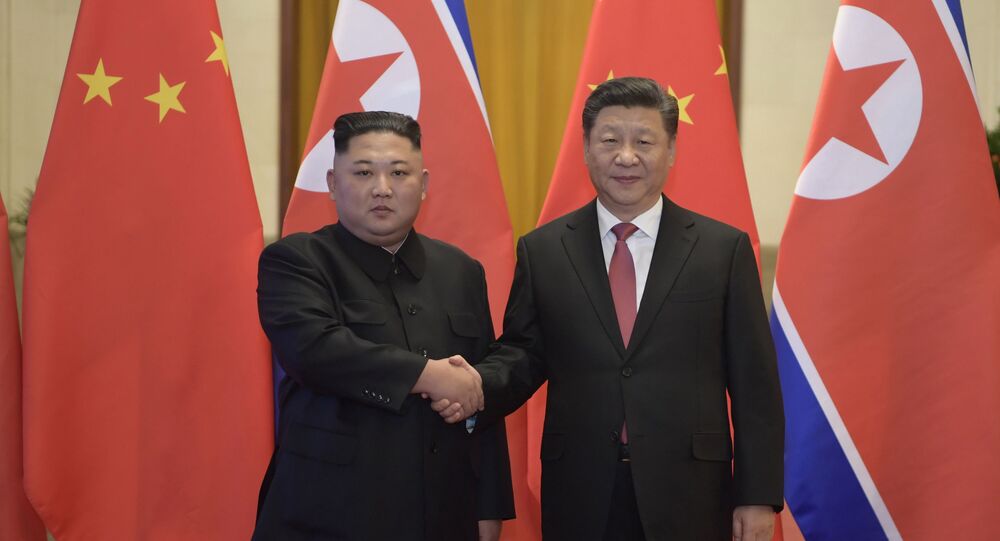 The bonds forged by the two communist countries over more than seven decades were hailed earlier in messages exchanged by North Korean leader Kim Jong Un and Chinese President Xi Jinping in connection with the centenary of the ruling Communist Party of China, marked on 1 July.

The messages are timed to coincide with the 60th anniversary of the two countries’ treaty of friendship, officially known as the Sino-North Korean Mutual Aid and Cooperation Friendship Treaty.

In a message sent to Xi Jinping, the North Korean leader said that their relationship was vital in the face of what he referred to as “hostile forces” around the world.

"Despite the unprecedentedly complicated international situation in recent years the comradely trust and militant friendship between the DPRK and China get stronger day by day," wrote Kim Jong Un, according to the outlet.

In his message, the North Korean leader reportedly underscored that the continuation of the 1961 treaty is working to defend socialism in Asia "now that the hostile forces become more desperate in their challenge and obstructive moves.”

Chinese President Xi Jinping emphasised that he has plans of “steadily leading the relations of friendship and cooperation between the two countries to a new stage,” according to KCNA.

The Sino-North Korean Mutual Aid and Cooperation Friendship Treaty was signed on 11 July 1961 between North Korea and China, and remains currently the only defence treaty either of the two has with any nation.

Similar mention of “hostile forces” and vows to boost cooperation was made at the start of the month as the two leaders traded messages on the July 1 centenary of the ruling Communist Party of China.

North Korean leader Kim Jong Un reached out to Chinese President Xi Jinping to express congratulations and hail the bonds forged by the two communist countries over the decades.

It was also underscored that amid a "complicated international situation", both Beijing and Pyongyang have come under increasing pressure from the US and Western powers, seeking to “disarm North Korea's nuclear weapons” and curb China's “rise to global leadership”.

“Hostile forces' vicious slander and all-round pressure upon the CPC” were denounced by Kim Jong Un as a “last-ditch attempt” to reign in the “on-going advance of the Chinese people, rallied close around General Secretary Xi Jinping, toward a fresh victory," according to the official Korean Central News Agency.

This comes as US diplomacy toward North Korea under the Biden administration seems to be in limbo.

US President Joe Biden in May appointed Sung Kim, a career diplomat with expertise on North Korea policy, to serve as a special envoy to the region, upon completing its policy review toward the country.

As Biden made the announcement alongside South Korean President Moon Jae-in during a joint press conference at the White House, he stated that the US, along with the allied government of South Korea, shares a “willingness to engage diplomatically with the D.P.R.K. to take pragmatic steps that will reduce tensions as we move toward our ultimate goal of denuclearisation of the Korean peninsula.”

© AP Photo / Alex Brandon
In this May 21, 2021, file photo, President Joe Biden listens as South Korean President Moon Jae-in speaks during a joint news conference in the East Room of the White House, in Washington.

However, North Korean Foreign Minister Ri Son Gwon said in June that the country was “not considering even the possibility of any contact with the US, let alone having it", adding that such talks “would get us nowhere, only taking up precious time”.

China, which remains the only major ally and the biggest trading partner to North Korea, has been recently on the receiving end of several executive orders by the Joe Biden administration aimed at countering alleged national security risks. The latter had been persistently cited by the administration of Biden’s predecessor Donald Trump as the key reasons for restricting trade with some Chinese companies and cracking down on certain technologies from China.

© AFP 2021 / ANDY WONG
US Secretary of State Mike Pompeo (L) shakes hands with Chinese President Xi Jinping as they pose for photograph at the Great Hall of the People in Beijing on June 14, 2018

As Beijing hosted a ceremonial meeting to mark the 100th anniversary of the founding of the Chinese Communist Party on 1 July, Chinese President Xi Jinping cautioned that foreign forces attempting to bully the nation will "get their heads bashed", and hailed a "new world" created by the people of China. Xi Jinping added that China will learn from the experience of other countries, but will not tolerate the "arrogant teachings" of other nations.