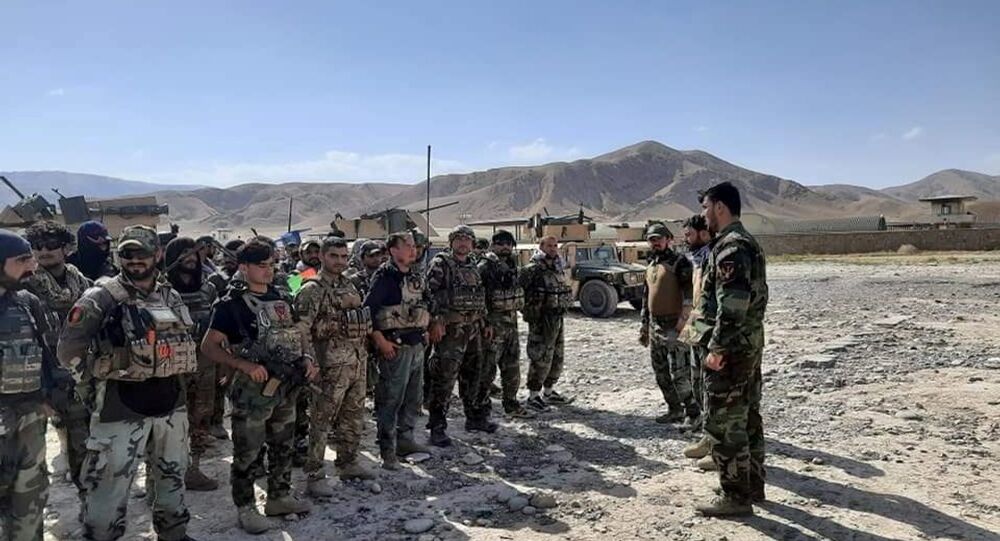 Tajikistan has taken in 1,000 refugees who have fled from fighting in Afghanistan's Badakhshan province between government forces and the Taliban. Is the current Afghan government doomed to the same fate as befell President Mohammad Najibullah?

He told Parliament: "All British troops assigned to NATO's mission in Afghanistan are now returning home. For obvious reasons, I will not disclose the timetable of our departure, though I can tell the house that most of our personnel have already left."

The Pentagon says 90 percent of US military forces have withdrawn from Afghanistan, with the rest expected to leave by September.

Afghan Army is surrendering to Taliban like dominos fall with a slight push.

And this is the Army that was badmouthing Pakistan ?

​The US withdrawal, which was announced by President Joe Biden earlier this year, comes as the Taliban’s offensive in northern Afghanistan has caused panic.

Hundreds of Afghan government soldiers retreating from the Taliban have also taken shelter over the border in Tajikistan.

The security situation in Afghanistan has rapidly deteriorated this month as the last of the NATO forces withdraw after 20 years in the country and on Wednesday, 7 July, the Taliban were reported to have fought their way into the city of Qala-i-Naw, capital of the western province of Badghis.

The Taliban's increasing hold over Afghanistan.#AFPgraphics map showing parts of Afghanistan under government control and territories under the influence of the Taliban, from April till July pic.twitter.com/5OfEEPV7mC

​The Afghan government began negotiations with the Taliban last year.

But Afghan Foreign Ministry spokesman Gran Hewad told Sputnik on Wednesday, 7 July: "Unfortunately the Taliban refused to continue negotiations under various pretexts and did not fulfill their obligations to the international community to reduce the level of violence, start constructive negotiations and break ties with international terrorist groups.”

Many Afghans are wondering whether it will only be a matter of time before the Taliban retake Kabul.

In an article published this week BBC foreign correspondent Lyse Doucet - who was in Kabul in January 1989 when the last Soviet troops left - has drawn similarities with the situation then and now.

She pointed out Australian and Belgian diplomats have already quit Kabul, the French are preparing to leave and the British embassy staff are continuing to assess the situation.

Between 1979 and 1989 a left-wing government in Kabul, supported by Moscow, tried to introduce equality for women and other socialist policies which were resisted by reactionary Muslims in rural Afghanistan.

In February 1989 the last Soviet troops crossed the border and exited Afghanistan, leaving the government of President Mohammed Najibullah to fight on against an array of mujahideen groups which included the US-backed Ahmed Shah Massoud and the Pakistan-backed Gulbuddin Hekmatyar.

Abandoning a base after 20 years of losing to dudes in caves? America is back! https://t.co/GT1TBjMVVO

​In the spring of that year Najibullah’s forces equited themselves well at the battle of Jalalabad and in 1990 hundreds of mujahideen were killed when Massoud’s men clashed with Hekmatyar’s Hezb-e-Islami.

But in August 1991 Boris Yeltsin took over in the Kremlin and cut off all military and economic support to Najibullah’s regime.

The fallout of the US exit is at full display even before the remaining troops have left Afg. The TB are making rapid territorial advances in Afg's peripheral areas focusing on north & west, instead of pressing ahead in south & east--their traditional strongholds. 1/n

​The mujahideen closed in on Kabul and when, in March 1992, Afghan Army General Abdul Rashid Dostum - an ethnic Uzbek - defected with his men; it was the beginning of the end for Najibullah.

In April 1992 Najibullah was forced to resign and took sanctuary in the UN compound as the different mujahideen groups fought with each other over control of Kabul.

Political anarchy and civil war wracked Afghanistan until September 1996 when a new force - the Taliban - conquered Kabul and took control.

They executed Najibullah - hanging him from a lamppost after torturing him - and forced Massoud’s moderate mujahideen to retreat back to the Panjshir Valley.

In 2001, in the wake of 9/11, a US-led NATO force would invade Afghanistan in pursuit of Osama Bin Laden and al-Qaeda who had been hosted by the Taliban, who shared his extreme Islamic worldview.

The Taliban retreated to the mountains and fought on for 20 years, resisting liberal ideas like women being allowed to go to school or university or work.

Now they look like they are on their way back.

On Thursday, 8 July, human rights activists called on Joe Biden’s administration to provide up to 2,000 visas for vulnerable women who are at risk after the US troops pull out from Afghanistan.

The Khaama Press reported 18,000 translators and interpreters in Afghanistan have applied for special immigration visas fearing they will be face retribution from the Taliban as “collaborators.”

At the weekend hundreds of women marched through the streets in the central province of Ghor with weapons, actively defying the Taliban.

Halima Parastish, head of the women’s directorate in Ghor province, told The Guardian: “Some women just wanted to inspire the security forces, it was just symbolic. But many more, including me, were ready to go to the battlefields.”

But a Taliban spokesman, Zabihullah Mujahid, is quoted in the same article saying: “Women will never pick up guns against us. They are helpless and forced by the defeated enemy.”

In 1992 an Afghan government supported by a foreign power collapsed, three years after that country’s troops withdrew.

In 2021 foreign troops have withdrawn from Afghanistan again but few doubt it will take three years for the government to lose control of Kabul to the Taliban.