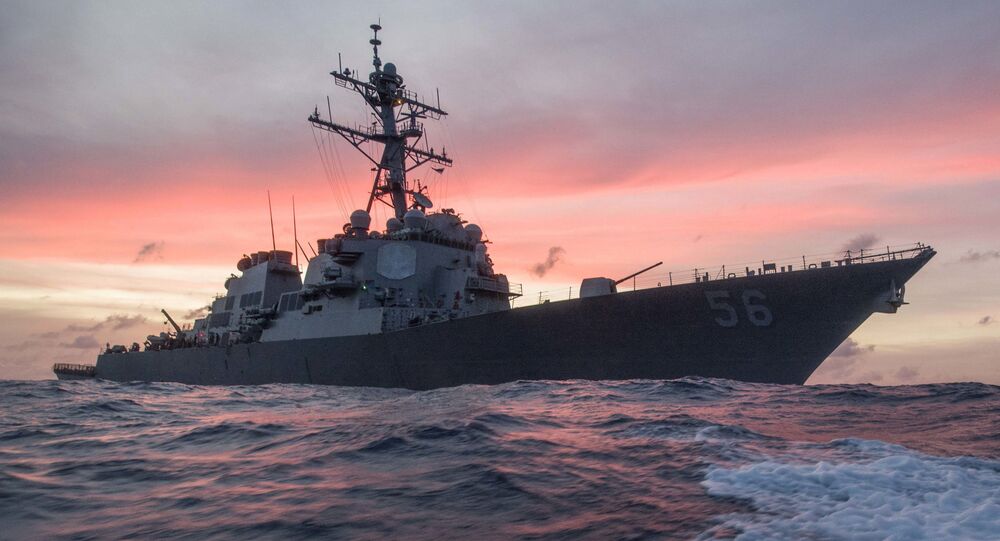 The US and Japan are reportedly carrying out secret drills for a possible conflict scenario with China over Taiwan. What's behind the supposed exercises and how could they affect the status quo in the Indo-Pacific region?

Washington and Tokyo started preparing contingencies for a potential confrontation with China over Taiwan in the last year of the Trump administration. The preparations have involved "top-secret tabletop war games and joint exercises in the South China and East China seas," according to The Financial Times.

Citing unnamed sources with knowledge of secretive drills, FT said that the allies were especially focused on the area around the Senkaku Islands, which are located some 350 kilometres to the west. The Senkaku/Diaoyu Islands are a group of uninhabited islands in the East China Sea, which is claimed by both Japan and the People's Republic of China. One of officials, cited by FT, emphasised the "urgent" need to establish the "trilateral sharing" of information between the US, Japan and Taiwan about the movements of Chinese naval and air forces.

There are three goals that the US is pursuing through these drills, according to Dr. Victor Teo, project research fellow with the Beyond the Cold War & Asian Regionalism project based at the Centre for Research in the Arts, Social Sciences and Humanities at the University of Cambridge.

First, Washington is seeking to demonstrate the resolve of the United States in protecting its interests in East Asia, and the primacy of the US-Japan alliance as the principal instrument in doing so. Second, the drills are supposed to send a message to the people of Taiwan and Japan "in their respective confrontation with China". Third, the US wants to show China that "the United States would not budge in the face of a conflict and the threat of force".

"While the drills might be a normal run of business during times of peace - they would be interpreted differently now as US-China relations are at a new low," Teo explains. "During these difficult times, these drills are extremely provocative from Beijing’s perspective."

Being started in the last year of Trump's presidency, and the exercises have apparently added to the surge in tensions between Washington and Beijing over tariff frictions, the Trump administration's crackdown on Chinese telecom giants and Washington's accusations of Beijing's "mishandling" of the coronavirus crisis. In addition to that, Trump repeatedly poked the People's Republic over the so-called "One China policy" by receiving a phone call from a Taiwanese leader Tsai Ing-wen in December 2016 and pushing pro-Taiwan bills.

© REUTERS / Tyrone Siu
Taiwan President Tsai Ing-wen waves as she boards Hai Lung-class submarine (SS-794) during her visit to a navy base in Kaohsiung, Taiwan March 21, 2017.

The One China Policy stipulates that Taiwan is part of the People's Republic of China and thus has no legitimacy to separately maintain diplomatic ties with other nations. The issue is a historical one, dating back to when the Nationalist Party of China, called the Kuomintang (KMT), lost control of mainland China after its defeat in the Chinese Civil War against the Communist Party of China (CPC) in 1949 and fled to Taiwan, declaring itself the Republic of China (ROC). Taiwan and the US had been participants of the Sino-American Mutual Defence Treaty between 1955 and 1979. Since then, Washington continued to back the Kuomintang-led government despite establishing diplomatic relations with the People's Republic of China.

The Biden administration largely followed the China strategy adopted by their predecessors, while at the same time reviving Barack Obama's "Pivot to Asia" policies seen by Beijing as an attempt to contain China's political and economic rise. Obama and Trump's administrations exploited Asia-Pacific maritime and territorial disputes involving China to increase pressure on the country.

Still, anyone thinking that the US-Japanese military manoeuvres will change China’s pursuit of national reunification goal is "delusional," according to Tao.

"The likely effect such prominent drills have during these sensitive times is to confirm an increasingly widespread belief in China that the US and its allies are supporting the stealthy and 'creeping' independence movement taking root in Taiwan, particularly over what has just happened in Hong Kong over the past few years," he says. "Such drills will only toughen resolve on all sides, and in doing so increases the risk of a major confrontation in the near future."

Rumours of US-Japan Preparations for War are Overestimated

The threat of a potential military confrontation between the US, Japan and China could be largely exaggerated, according to Dr. Chang Ching, research fellow of the Taiwan-based Society for Strategic Studies and a lead military expert on the People's Liberation Army and regional security in Taiwan.

"Rumours of the United States and Japan enthusiastically preparing a conflict in the Taiwan Strait have always existed in the past several decades," says Chang. "Generally speaking, media reports always linked these street side hearsay chitchats to some routine military exercises between the United States and its regional alliance states or partners."

At the same time, the researcher expresses doubts that hypothetical preparations for a conflict with China over Taiwan could turn into anything meaningful. Assumptions that the world powers would rush to Taiwan's rescue should China actually invade the island "is nothing else but a bluffing in poker game or a self-deceived political ecstasy just like blowing whistle as people walk next to the graveyard for self-encouraging but never realistic", according to him.

Presently, the US drills in the region appear to be nothing more than "unsuccessful and embarrassing gunboat diplomacy", according to the researcher, who warns the world's powers against "fish[ing] in the trouble waters".

When it comes to Japan's focus on the Senkaku/Diaoyu Islands, the military exercise scenarios formulated by the Japanese Self Defence Force are totally based on groundless speculation to assume Beijing will take the initiative and launch an invasion, according to Chang.

While the US and Japan describe China's actions in the Indo-Pacific region as "provocations" they are obviously doing just the same thing, the scholar notes, nailing Washington and Tokyo for their "double-standard approach".

"If we fail to judge these military activities with fair standards and adopt the same criteria, we will be the victims of the Western 'perception operations'," Chang concludes.