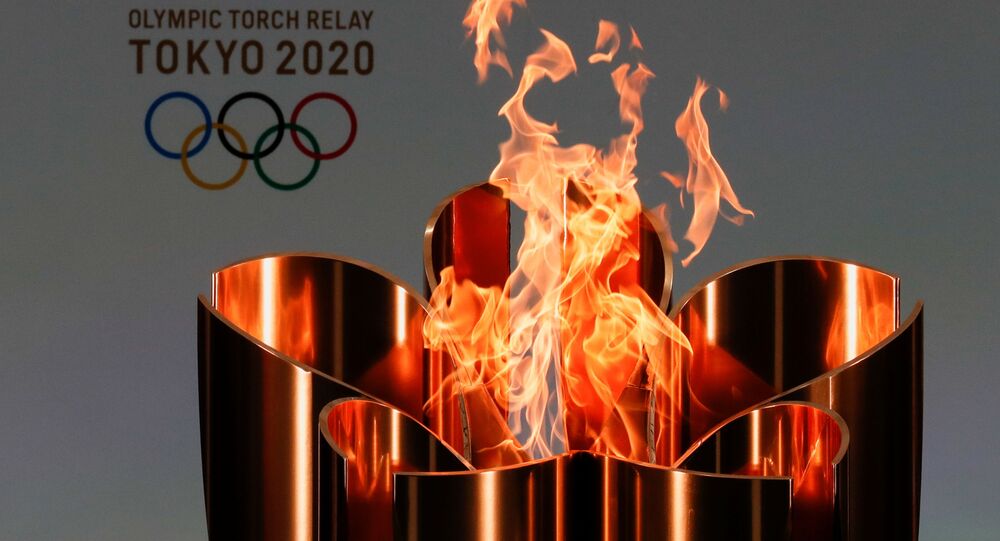 The Tokyo leg of the relay, which will start after the flame passes through 46 of Japan's prefectures, will not be held on public roads in Tokyo, except the small island areas, on 9-16 July, to prevent the spread of COVID-19, local authorities said.

President of the International Olympic Committee (IOC) Thomas Bach is expected to arrive in Japan on 9 July and will likely visit Hiroshima on 16 July, according to Kyodo. The current lighter quasi-state of emergency in Tokyo is set to end on 11 July.

Bach's visit was initially scheduled for May to mark the start of the Olympic torch relay in Hiroshima but was later postponed.

© REUTERS / ISSEI KATO
The Rainbow Bridge and Tokyo Tower are illuminated with Olympic colours to mark 100 days countdown to the Tokyo 2020 Olympics that have been postponed to 2021 due to the coronavirus disease (COVID-19) outbreak, in Tokyo, Japan April 14, 2021.

The Summer Olympics in Tokyo were initially scheduled for 2020 but were postponed in the spring of last year amid the coronavirus pandemic. The Games are currently scheduled to be held this summer, from 23 July until 8 August.

Because of COVID-19, the Japanese government has decided to hold the Tokyo Olympics and Paralympics without foreign spectators.

Earlier this month, organizers of the Olympic Games in Tokyo decided to allow up to 10,000 spectators at each venue. The spectator cap was set at 10,000 if this does not exceed 50 percent of a venue's capacity.

Japanese Prime Minister Yoshihide Suga has said that the Olympic and Paralympic Games in Tokyo could be held without spectators if a COVID-19 state of emergency is declared in the country.