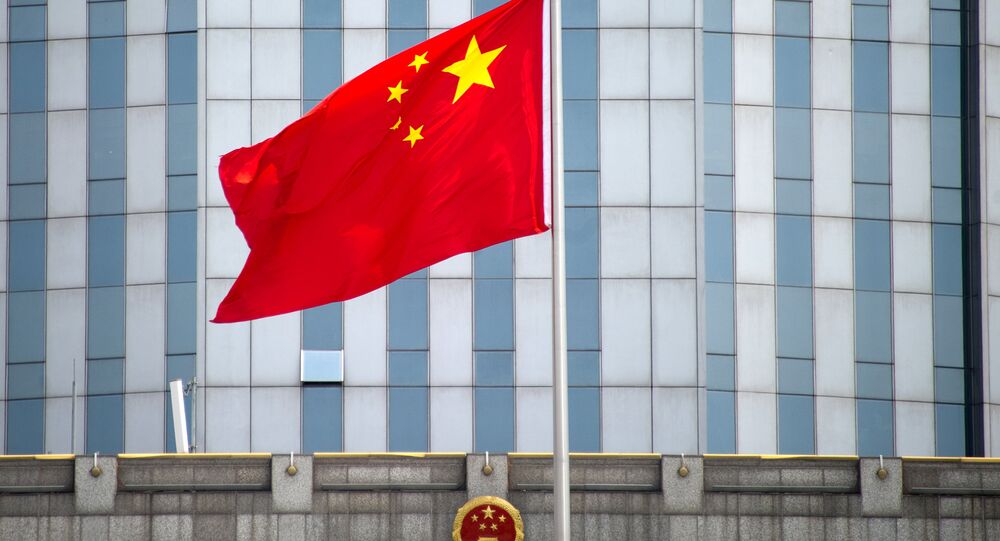 The Taiwanese Defence Ministry announced on 15 June that 28 People’s Liberation Army Air Force aircraft, including fighters, maritime strike, and strategic bombers, had entered Taipei’s Air Defence Identification Zone (ADIZ), which China does not recognise, as it considers Taiwan an inalienable part of the People’s Republic.

Beijing has underscored the need for Taiwan – the island it considers to be an integral part of China - to acknowledge that its future lies in "reunification".

© AP Photo
In this photo taken and released Friday, May 25, 2018, by the Taiwan Ministry of National Defense, a Taiwanese Air Force fighter aircraft, left, flies near a Chinese People's Liberation Army Air Force (PLAAF) bomber that reportedly flew over the Luzon Strait south of Taiwan.

"The United States should fully understand that China's development and growth cannot be stopped by any force," said Ren. In a reference to Taiwan's ruling party, the spokesperson added:

"The Democratic Progressive Party authorities must be soberly aware that the future of Taiwan lies in national reunification."

Earlier in the week, China’s Taiwan Affairs office urged outside powers to avoid meddling in the island’s affairs, and denounced local political forces for their "independence" rhetoric.

“We will never tolerate attempts to seek independence or wanton intervention in the Taiwan issue by foreign forces, so we need to make a strong response to these acts of collusion,” said Taiwan Office spokesperson Ma Xiaoguang in a press statement.

The comments came as the Taiwanese Defence Ministry announced on Tuesday that a record 28 People’s Liberation Army Air Force aircraft had entered Taipei’s Air Defence Identification Zone (ADIZ) in the space of 24 hours.

These had ostensibly included fighters, maritime strike and strategic bombers, early warning and control aircraft.
Beijing does not recognise Taipei’s ADIZ, and considers Taiwan an integral part of the People’s Republic of China.

The incident fed into the recently escalated war of words between China and the United States after the Group of Seven leaders issued a joint statement chastising China for a plethora of issues, including its stance on Taiwan, and stressing the “importance of peace and stability” across the Taiwan Strait. Taipei authorities, whose ties with mainland China were severed at the end of the Chinese Civil War in 1949, when Nationalist forces defeated by Mao Zedong’s communists fled to the island, welcomed the statement.

The Taipei government said that Taiwan was a “force for good” in the world and vowed to seek additional support from other countries.