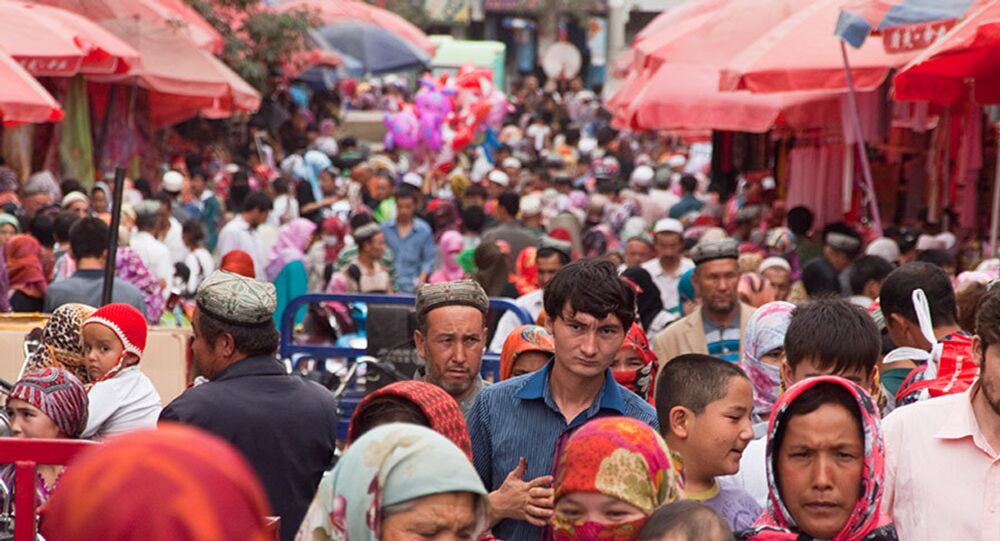 Nuradli Wublikas, a young Uyghur man from Kashi in northwestern China's Xinjiang region, is seeking to sue a think tank, the Australian Strategic Policy Institute (ASPI) for its report on so-called forced labour in China's Xinjiang, because the ASPI report has hurt the image of the Uyghur group and undermines their employment opportunities.

"We want them to stop slandering my hometown and to apologise for having defamed us", said Nuradli.

In April, led by the 26-year-old Nuradli, a group of young Uyghur people living in Changsha, the capital of central China's Hunan Province, co-authored a joint letter and called on more Uyghur people whose interests have been hurt by ASPI's report on so-called forced labour in China to join their activities to sue the Australian think tank.

© AP Photo / B.K. Bangash
Pakistani PM Imran Khan Slams Western 'Hypocrisy' for Ignoring Kashmir, Focusing on Uyghurs in China
In February 2020, ASPI released a report claiming that the Chinese government "forced" the massive labour transfer of Uyghur people from the Xinjiang region to factories in other cities in China. The report was cited by many Western media outlets, which turned a blind eye to the fact that the report had been refuted by China for its loopholes and slander.

In November 2020, the US Commerce Department announced sanctions on Chinese companies over allegations of "forced labour".

"I noticed my hometown Xinjiang has long been slandered. After hearing the news on ASPI's report, I found it and read through it with the help of a translator", Nuradli told the Global Times.

Nuradli was filled with anger and indignation after reading the report. "The report is full of lies! I was born and grew up in Xinjiang and know so many Uyghurs living and working in other cities across the country, and no one is 'forced' to work outside! It really made me angry that we Uyghurs are portrayed by the Australian think tank report as lazy people who need to be 'forced' to work", the young man said.

"Those who wrote the report know little about Xinjiang's real situation…", said Nuradli. "There is a lot of surplus labour in villages and people are willing to work outside. A friend of mine worked in other cities outside Xinjiang for a year and earned enough money to build a new house. And after another year of working, he had the money to marry his girlfriend".

He noted that in sharp contrast to the ASPI report's allegations of "forced labour", people from Xinjiang who choose to work in other Chinese cities are making their own decisions as to where they go to work and what kind of jobs they do. Those who want to start their own businesses in other cities also enjoy many favourable policies.

"Take myself as an example. After graduating from Jishou University in 2018, I started my own e-commerce business named Haobalang selling Xinjiang food. Since I began trying to start my business when I was in university, my teachers, the university and local government of Zhangjiajie [where Jishou Univerisity is located in central China's Hunan Province] have helped me a lot", Nuradli said.

Haobalang literally means "good boy" as "balang" is boy in the Uyghur language.

In addition to damaging the Uyghurs' image and dignity, the ASPI's slander also undermines Uyghurs' rights, Nuradli pointed out

"One senior student who graduated from my university told me that he was sacked from a foreign trade corporation, as the US purchasing agent asked this company and other partners to look into the 'forced labour' of Uyghurs. Although these companies hired Uyghur employees in accordance with laws and regulations, they decided to sack them to avoid possible risks or sanctions from the US. We, Uyghurs' rights for development and employment have been undermined", said Nuradli.

Apart from ASPI, some think tanks and individuals from the West and the US have actively joined the campaign to slander China over so-called forced labour in its Xinjiang region, and have cited the untenable allegation to ban products, especially cotton, from the region.

In April, a court in the Kashi Prefecture of Xinjiang accepted the lawsuit of a local yarn company named Xiongying to sue the infamous anti-China German "scholar" Adrian Zenz for his reports on so-called forced labour, as Zenz's reports have severely damaged the company's reputation and caused economic losses.

The Global Times also learned from sources that more companies and individuals that have been affected by the "forced labour" hype and the ensuing sanctions, including labour services companies, are preparing to use the law to protect their interests.