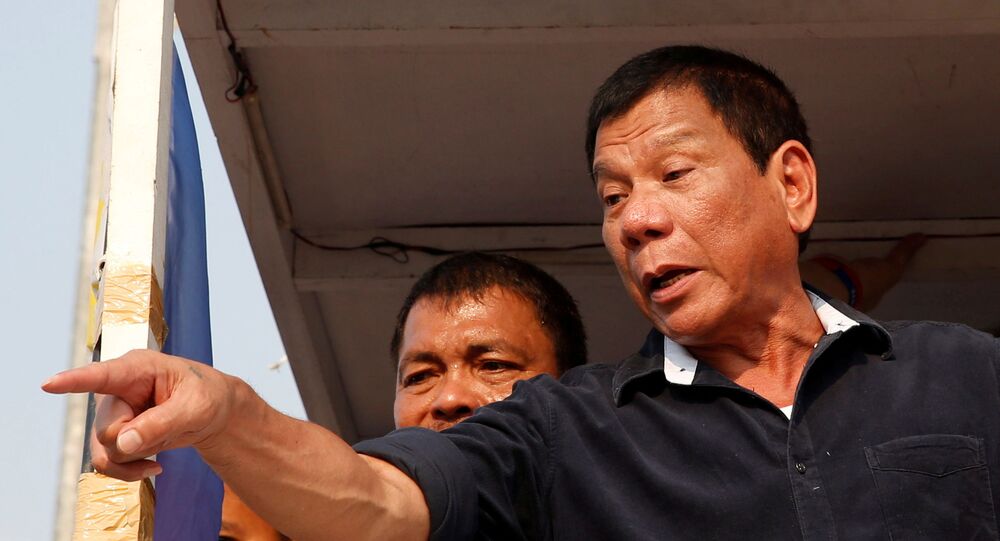 Duterte Says He's Ready to Face Court Over War on Drugs Killings, Just Not Before the ICC

The Philippine president has faced criticism over his methods of fighting the drug lords in his country, which purportedly included extrajudicial killings. The president later argued that a harsh approach was necessary to root out the drug cartels, which he sees as a national security problem.

Philippine President Rodrigo Duterte has slammed the idea of him standing before the International Criminal Court (ICC) over alleged crimes against humanity as "crazy".

"Why would I defend or face an accusation before white people? You must be crazy", he said.

The president argued, however, that he is ready to be tried over his anti-drug crackdown, but only by his own people, who presumably benefited from it. He stressed that if it wasn't for him, the Philippines might have already been facing similar issues such as those found in Mexico, where drug cartels can purportedly influence local elections and openly defy authorities.

"I will readily face a court, be accused in a Philippine court, before a Filipino judge […] We kill them because they fight back. That's why I want to slap the judges there. You are fools. You want my country to go down the drain!", Duterte said.

Duterte's War on Drugs (and ICC)

The Philippine president's approach to rooting out drug cartels in the country has raised many questions internationally, with human rights watchdogs claiming that the country's law enforcement is carrying out crimes against humanity. They believe that the official body count in the war on drugs, 6,000 people, is lower than the real figures and that the local police engaged in the extrajudicial killing of suspects involved in the drug trade.

These allegations reached the ICC, which opened a preliminary examination into the matter. Duterte condemned the ICC's actions and, in 2019, withdrew his country's signature from the Rome Statute establishing the court. Still, despite the president's efforts, the international court retained the jurisdiction to review human rights violation allegations in the Philippines if the suspected events happened prior to the date of the country's withdrawal from the ICC, meaning any violations that the Philippines' authorities might have committed between 1 July 2016, the start of the anti-drug crackdown, and 16 March 2019 can be investigated by the ICC.

Don't Be Rude, Duterte Warns After Philippine FM Tells China to 'Get the F**k Out' Over Sea Row