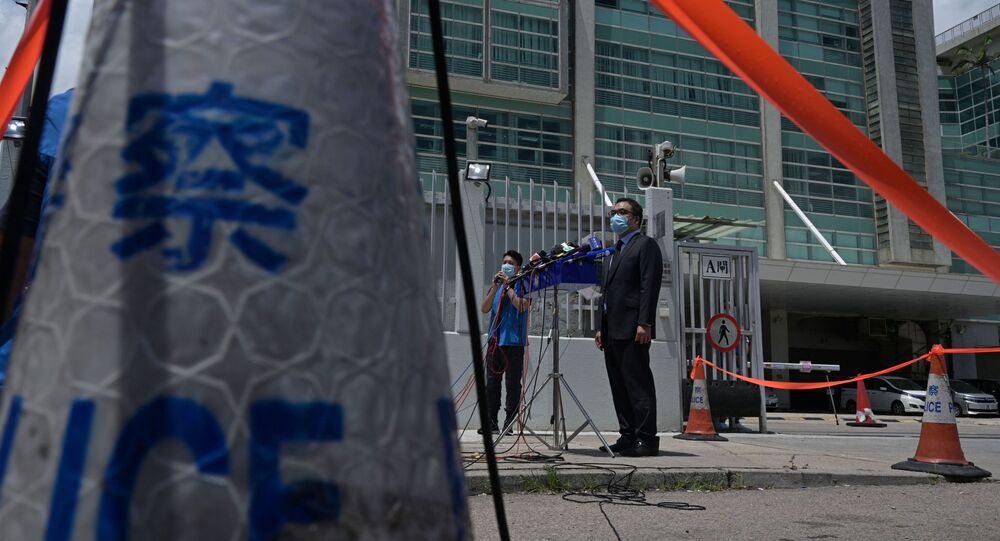 The Hong Kong National Security Law was passed in June 2020, enacted by the Chinese Standing Committee of the National People's Congress in Beijing. It prohibits "separatism, subversion, terrorism and foreign interference" in Hong Kong.

According to the report, the officers accessed the computers of the staffers and requested that everyone register with their identity cards, staff ID and personal information before they enter, while not allowing the journalists to return to their desks. The outlet also said the reporters were prohibited to film or live-stream the raid.

The police raided the office at 7:30 a.m., local time, with Reuters reporting, citing the police, that 500 officers participated in the operation.

Besides Law and Kim-hung, among those arrested were COO Royston Chow, associate publisher Chan Pui-man and the platform director of Apple Daily Digital, Cheung Chi-wai. The executives are accused of 'foreign collusion' in breach of Article 29 of the China's new National Security Law for Hong Kong.

During a press conference after the raid, a senior superintendent, Steve Li, told reporters that HK$18 million (US$2.3m) in assets owned by Apple Daily had been frozen under the National Security Law. He also outlined that the raid on Apple Daily is not intended to be a target on the wider media industry, only relating to one company.

5 executives were taken away, including Editor-in-Chief Ryan Law and #NextDigital CEO Cheung Kim-hung.

Officers were seen accessing journalists' computers, and all employees were barred from returning to their seats to work.#AppleDailyENG pic.twitter.com/45nsFWmCfE

​Apple Daily cited a government statement on the raid, which said that the operation was conducted "with a search warrant under Article 43(1) of the national security law, which 'covered the power of searching and seizure of journalistic materials'”.

The National Security Law was passed in 2020 by the Chinese Standing Committee of the National People's Congress in Beijing, and is intended to criminalize "separatism, subversion, terrorism and foreign interference" in Hong Kong. Many criticise the law, and see it as violating the civil liberties of Hong Kong residents.

This is the second time police have targeted Apple Daily, as last year the outlet's founder, Jimmy Lai, was arrested and put behind bars after being accused of unauthorized assembly.

A popular tabloid newspaper in the region, Apple Daily has produced many articles critical of Beijing's policy towards Hong Kong. The media outlet has faced accusations from a police commissioner of sparking hatred and dividing society. After the Thursday raid, Hong Kong police said, cited by a DW journalist, that the outlet had produced "dozens of online & printed articles urging for sanctions against China and Hong Kong since 2019 until recently".