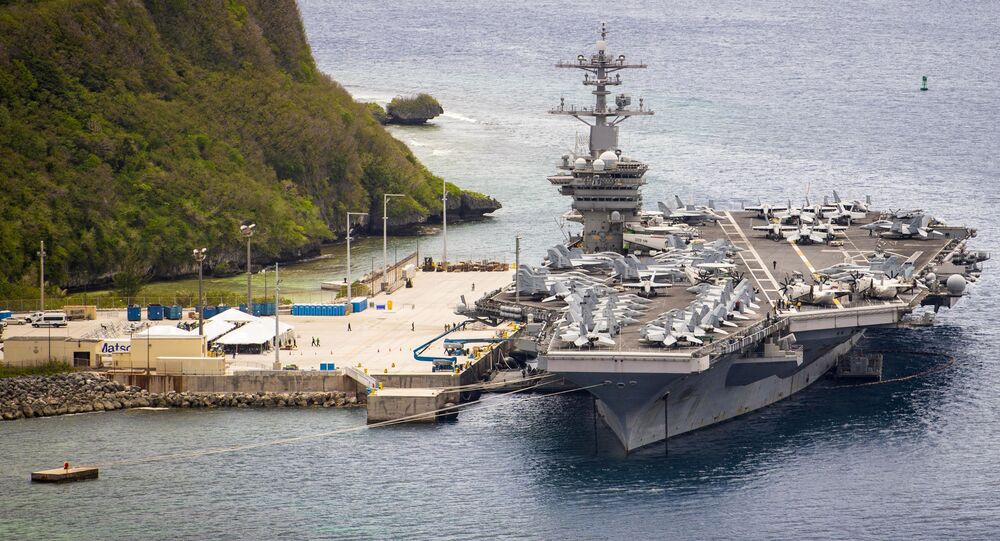 The Biden administration dramatically ramped up the US’s military footprint in the Asia-Pacific region in recent months, deploying carrier strike groups to the South and East China Seas at four times for ‘freedom of navigation’ missions, and doubling reconnaissance flights over Chinese-claimed waters.

The United States military is mulling the creation of a permanent naval task force in the Pacific “to counter China” and “add muscle” to President Joe Biden’s tough talk about Beijing, Politico reports, citing two persons said to be familiar with the discussions.

The outlet’s sources say the task force would be modelled after a NATO-based permanent naval deployment created in the Atlantic in 1968 to ‘counter the Soviet Union’ known as the Standing Naval Forces Atlantic. That force currently has between four and six destroyers, frigates, and auxiliary ships deployed at any one time, and is designed to provide the Western bloc with an immediate response capability.

At its height, the Atlantic force included up to ten ships, which were deployed to it for as many as six months. After 1991 and the Soviet collapse, the force proved useful in enforcing NATO’s construction of a new Western-dominated order in Europe, including by staging a maritime blockade against Yugoslavia during the Yugoslav wars. Later, the force also took part in the global campaign against Somali pirates.

Along with the Pacific task force plans, the Pentagon is also reportedly mulling the creation of a specially-named military operation in the region to allow the DoD to pump more cash and resources from the military budget to deal with the “China problem.” US military spending hit over $705 billion in 2021 and lawmakers want additional spending for fiscal year 2022.

© AP Photo / Aviation Boatswain's Mate (Handling) 3rd Class Kimani J. Wint
USS Ronald Reagan Carrier Strike Group Enters South China Sea – Photos
A Pentagon official confirmed that the military was “looking at a number of proposals in the Indo-Pacific and across the department, to better synchronise and coordinate our activities,” but did not comment specifically on the reported plans for a Pacific task force.

It also remains unclear whether the possible new force would include only US ships, or vessels from other regional nations as well. The Pentagon has yet to brief Congress on the matter.

The news comes amid the latest deployment of a US carrier strike group in the South China Sea – a strategic, resource-rich maritime territory – large swathes of which are claimed by China, Vietnam, Malaysia, Brunei, the Philippines and Taiwan. Regional countries began work on the creation of a regional code of conduct in the South China Sea in 2011 after decades of dispute and confrontations, including military clashes. Washington has sought to sabotage these negotiations by declaring the sea to be “a matter of US national interest” and creating a network of bilateral alliances with regional nations to help them challenge China’s claims.

Sputnik Screenshot
The Chinese corvette Huizhou fires its main gun in live-fire drills in the South China Sea on August 15, 2020

In addition, the US has been sailing ‘freedom of navigation’ operations in contested waters, ostensibly to support “the free flow of commerce” and a “rules based international order.” China says these missions are illegal and aimed at pressuring Beijing.

Washington has also threatened to station ground-based ballistic missiles in the 500-5,500 km range in Pacific territories after withdrawing from the Intermediate-Range Nuclear Forces Treaty with Russia in 2019.

© AP Photo / Rob Griffith
US Flew 72 Reconnaissance Flights Over South China Sea in May, Double Last Year - Think Tank
A carrier strike group led by the USS Ronald Reagan entered the South China Sea on Tuesday. The sail is at least the fourth such deployment since Joe Biden became president in January, and has been accompanied by an “unprecedented” increase in US reconnaissance flights over the sea in recent months. According to one estimate, the US more than doubled its spy flights in the region in the month of May alone between 2020 and 2021.

The United States already operates nearly 400 military bases in countries surrounding China, with about 130,000 US troops stationed in the Indo-Pacific region in total. These forces include the massive, 50,000 personnel-strong United States Forces Japan, where the US military has been present since occupying the island nation at the end of World War II in 1945, South Korea, where about 23,500 troops are based, Australia, the Philippines, Singapore, and the Naval Support Facility Diego Garcia in Britain’s Indian Ocean Territory.

400 US military bases surround China.
130,000 US troops are stationed in the Indo-Pacific.
US warships regularly enter the South China Sea.

China has no corresponding chain of military bases and does not send warships to roam around California's coast.

China is not a threat! pic.twitter.com/1lDfIHjEP5

China has one overseas military base, in Djibouti, Africa.