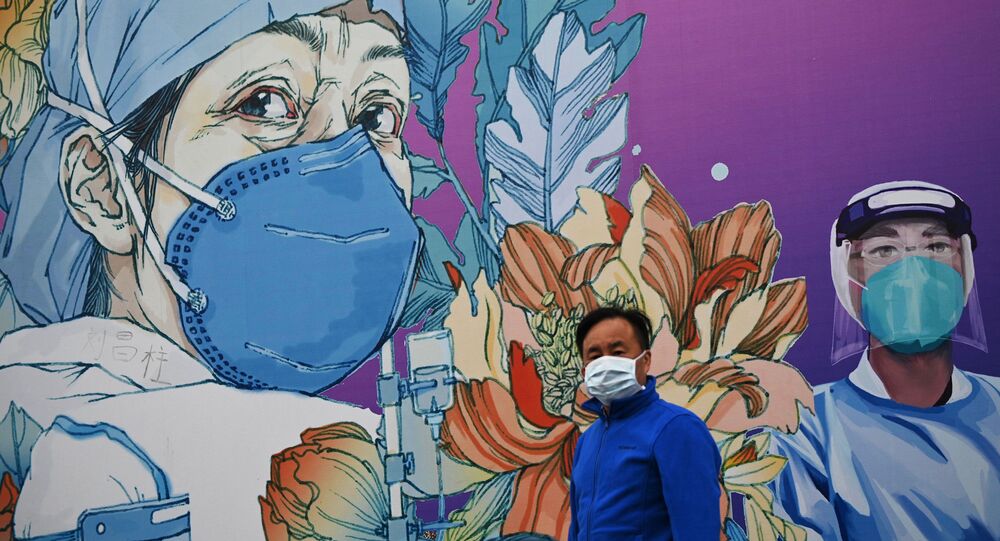 US President Joe Biden's decision to launch a 90-day investigation into the origins of the coronavirus pandemic and revisit the theory of a potential leak from China's Wuhan Institute for Virology has raised many eyebrows in the People's Republic, says Beijing-based commentator Thomas W. Pauken II.

On Friday, Yang Jiechi, director of the Office of the Foreign Affairs Commission of the CPC Central Committee, held a phone conversation with US Secretary of State Antony Blinken expressing "grave concerns" about "fabricated and peddled absurd stories claiming a Wuhan lab leak." According to Xinhua, Yang urged Washington "to respect facts and science, refrain from politicising COVID-19 origin tracing and concentrate on international anti-pandemic cooperation."

Biden's push for a renewed investigation into the roots of COVID followed a release of a previously undisclosed US intelligence report claiming that three researchers from the Wuhan Institute of Virology "became sick enough in November 2019 that they sought hospital care."

Although the Wuhan lab leak theory, advocated by Donald Trump, was previously dismissed as a crackpot idea by Big Media and Big Tech, it has since garnered more approving headlines. The proponents of the idea draw attention to the fact that scientists have yet to find the natural reservoir for SARS-CoV-2. However, there is no direct evidence supporting the lab leak hypothesis either.

"At first, Beijing was surprised by the Biden administration when they announced a 90-day extension on an investigation over the Wuhan lab leak theory," says Thomas W. Pauken II, a Beijing-based Asia-Pacific Affairs commentator and author of US vs. China: From Trade War to Reciprocal Deal. "But let’s be logical. Why would this lab leak theory get dismissed as a conspiracy theory last year but suddenly be accepted as the truth this year? The blame Trump rhetoric is not a winning argument. If so, Democrats are admitting they will only investigate for political partisan reasons and you can’t expect a fair investigation from that."

To complicate matters further, the lab leak theory is getting "wilder and wilder" with recent media stories, according to the author. While, initially it was rumoured to be just an accident, now "the media narrative is going with the story that the People’s Liberation Army (PLA) not only manufactured it in the Wuhan Virus Lab but leaked it intentionally," Pauken notes.

"Why would the Chinese government operate a lab to create dangerous viruses in a city with over 12 million people?" the commentator asks. "Why would the virus be leaked in a populated Chinese city with the intent of biowarfare? How would Beijing win biowarfare if they leak the virus among their own citizens and not at cities outside China’s territorial borders? I am not a scientist nor an expert on viruses or biowarfare but the lab leak theory makes no logical sense."

The fact that many people believe such strange narratives makes the author wonder about "how dangerous the Western media and the anti-China thought leaders have become that they can make ordinary people believe such nonsense about Beijing." Meanwhile, anti-China sentiment has already resulted in a spike in hate crimes against Asian people in the US.

Pauken hopes that neutral and responsible scientists will get to the bottom of the pandemic's true origin. He does not rule out that the Wuhan lab leak narrative is nothing short of "a CIA-inspired 'propaganda prank" to smear China’s reputation to distract the public from the utter incompetence of how Western governments had responded to the pandemic in the early months of last year."

"If scientists prove the conspiracy was not verified we could see a moment of truth when the US and China could reverse course and improve bilateral relations in the immediate aftermath," he suggests.

Meanwhile, the resumed attacks on China over the COVID outbreak appear to be yet another manifestation of Biden's "Pivot to Asia," inherited from President Barack Obama and recently instrumentalised by British hawks, Pauken deems.

The anti-China campaign can influence how sovereign governments communicate with the Chinese government, according to the author. If they begin to believe that the Wuhan Virus Lab Leak theory is fact and not fiction, they would likely distance themselves from Beijing, thus upending China's influence. When the public and government officials believe a string of lies, the ‘Pivot to Asia’ strategy becomes successful, according to Pauken.

The West's anti-China campaign has already borne its bitter fruit: On May 20, 2021, the European Parliament passed a resolution to freeze ratification of the EU-China Comprehensive Agreement on Investment (CAI) over human rights concerns. However, the deal may still be ratified if geopolitical tensions calm down.

The CAI was aimed at easing European-Chinese trade barriers and has come under heavy criticism from American politicians and thought leaders after being agreed to in December 2020.

Following the suspension of the deal, China's Ministry of Commerce (MOFCOM) spokesperson Gao Feng emphasised that the CAI is a mutually beneficial deal for the People's Republic and EU member states, as quoted by The Global Times.

For the time being, the current anti-China trend is not good, according to Pauken: "So long as sovereign governments and the media keep talking about the virus, Beijing will be seen in a negative light," he presumes.

However, when countries stop paying attention to the pandemic and shift their focus on economic matters, China stands a better chance to win back old friends in Asia and Europe, according to the Beijing-based commentator.

"China is the world’s leading exporter," he says. "Inflation is soaring and that was partly caused by many countries placing trade and investment restrictions on Chinese companies. Global supply chains have been severely disrupted, but Chinese manufacturers and exporters can do their part to restore normal business flows and operations but that can’t happen until the US, UK, EU, ASEAN and other countries start to improve diplomatic relations with Beijing."

Keystone Gets Canceled, China Points Finger at US Navy