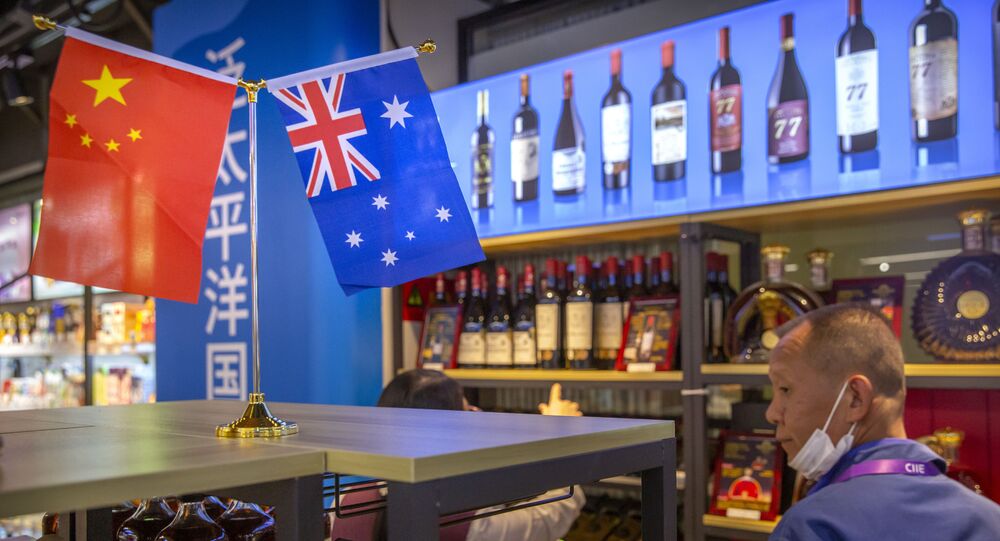 Tokyo and Canberra expressed concerns over what they said were the People’s Republic’s “coercive” and “destabilising” activities in the Asia Pacific region on Wednesday, vowing to strengthen defence ties, and repeating previously expressed allegations about the poor human rights situation in Xinjiang and Hong Kong.

China objects to efforts by Japan and Australia to play up the so-called “China threat,” and to maliciously “slander” Beijing over its internal affairs, Foreign Ministry Spokesman Wang Wenbin has said.

“Issues relating to Xinjiang and Hong Kong are China’s internal affairs that brook no foreign interference. Japan and Australia are hyping up the so-called ‘China threat’ theory, maliciously slandering and attacking China and wantonly meddling in China’s domestic affairs. China firmly rejects this,” Wang said, speaking at a press briefing on Wednesday.

Calling on Japan and Australia to “abide by international law and basic norms of international relations,” including respect for sovereignty and non-interference, Wang urged the two countries to “stop meddling” in China’s affairs and “stop undermining regional peace and stability.”

© REUTERS / LAM YIK
Police officers fold Chinese and Hong Kong flags at a flag-lowering ceremony in front of the Golden Bauhinia statue on the square, in Hong Kong, China March 30, 2021.

The joint statement was released after a video conference call between Japanese Foreign Minister Toshimitsu Motegi and Defence Minister Nobuo Kishi with their Australian counterparts Marise Payne and Peter Dutton, during which the two countries agreed to strengthen defence ties over China’s alleged malign activities in the Asia-Pacific region, including its territorial claims in the East and South China Seas.

Tokyo and Canberra pointed to “serious concerns about the recent negative developments and serious incidents in the South China Sea, including continuing militarisation of disputed features, dangerous use of coast guard vessels and ‘maritime militia’, and efforts to disrupt other countries’ resources exploitation activities.”

Japan and China have a decades-old dispute over the Japanese-controlled, China-contested Senkaku Islands (a small chain of uninhabited rock formations about 170 km northeast of Taiwan). China refers to the formations as Diaoyu. Beijing also has an ongoing territorial dispute with its neighbours in the South China Sea, claiming maritime areas which are also claimed by Vietnam, Malaysia, Brunei, and the Philippines. The countries agreed to a set of preliminary guidelines for a dispute resolution mechanism in 2011 but further negotiations have been hampered, partially due to Washington’s move to declare the South China Sea as a "matter of US national interest" and American diplomatic and military support to regional nations seeking to contest China’s claims. These actions have been complimented by regular US "freedom of navigation" naval patrols in the region – a policy Beijing has vigorously criticised.

Japan and Australia are holding talks on the creation of a defence cooperation pact which would allow Japan’s military – the Self-Defence Force, to assist in the protection of Australian military assets, and for the two countries to engage in joint drills, and assist one another in the areas of transport, supply and intelligence-gathering. Speaking to reporters following Wednesday’s talks , Defence Minister Kishi said that Tokyo and Canberra would need to “further deepen security cooperation” to “proactively contribute to the peace and stability of the Indo-Pacific region.”

Tokyo and Canberra have been negotiating the defence pact since last October.

Relations between China and Japan have floundered in recent months, particularly as the Biden administration has sought to shore up its alliances with regional nations into anti-Beijing coalition known as the "Quad." Diplomatic relations between Beijing and Canberra have been notoriously poor for several years now amid a trade dispute which started in 2018 when Australia banned Chinese tech giant Huawei from being involved in construction of its 5G infrastructure. The dispute escalated in 2020 after Canberra hinted that China may be to responsible for the coronavirus pandemic, and expanded further into tit-for-tat raids on the homes of journalists working in the two countries, a host of tariffs and export restrictions, and a Chinese ban on the import of coal from Australia – once one of its largest sources of thermal and coking coal.

© REUTERS / CARLOS GARCIA RAWLINS
Chinese Parliament Slams US Bill Addressing 'Tech Threat' Coming From China
Advising the US not to treat China as an “imaginary enemy,” and suggesting that the US was its own “greatest threat to itself,” Wang stressed that China would remain committed to its policies of non-conflict, non-confrontation, mutual respect and win-win cooperation, but would also to safeguard its sovereignty, security and development interests.

The Senate approved the new legislation, known as the "United States Innovation and Competition Act" on Tuesday, with the measure authorising nearly $190 billion for the strengthening of US technology and research leadership initiatives. The bill will now head to the House of Representatives , which already passed a different version of the legislation, and will need to be moulded into a single bill before it can be sent to the president for signature.

China Accuses US, Japan of 'Ganging Up' Against Beijing