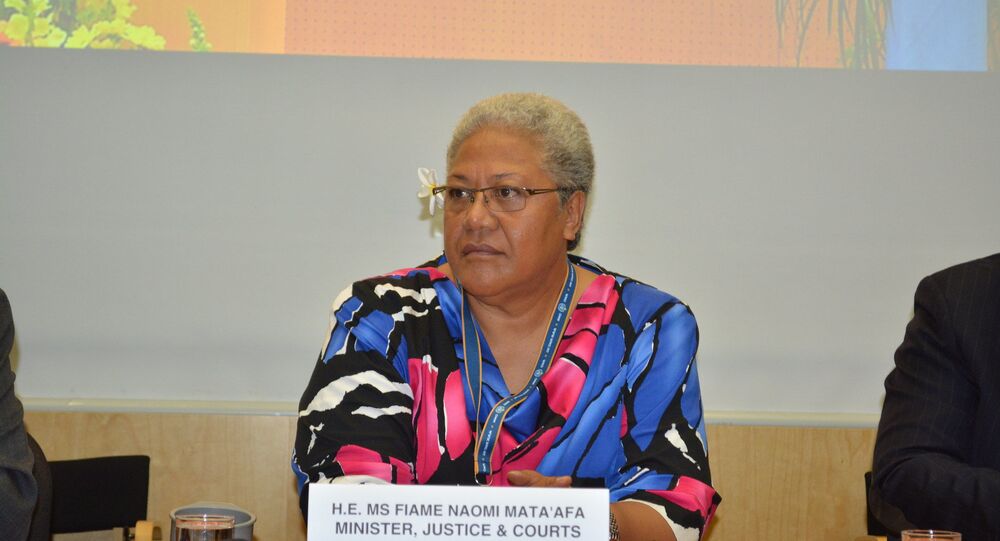 The Pacific Island nation of Samoa was plunged into a political crisis on Monday as Fiame Naomi Mata'afa, leader of the opposition party FAST, was sworn in as prime minister in a tent on the statehouse lawn after Tuilaepa Sailele Malielegaoi, who has been prime minister since 1998, ordered the doors of parliament locked.

Mata'afa’s prime ministership began on an unexpected note on Monday, taking place inside a tent pitched in the capital city of Apia instead of the dome-shaped Fale Fono, Samoa’s Parliament House.

Tuimalealiifano Vaaletoa Saluavi II, Samoa’s head of state and a supporter of Tuilaepa, decreed on Saturday evening that he was suspending Parliament "until such time as to be announced and for reasons that I will make known in due course.” However, the following morning, an extraordinary session of the Samoan Supreme Court struck down the ruling, enabling Mata'afa’s swearing-in to proceed.

United Nations Secretary-General Antonio Guterres issued a statement on Monday urging “the leaders in Samoa to find solutions to the current political situation through dialogue in the best interest of the people and institutions of Samoa. The United Nations stands ready to provide support to Samoa if requested by the parties.”

The court’s ruling was the just the latest blow against the rule of Tuilaepa’s Human Rights Protection Party (HRPP), which has led the nation of 200,000 for more than 40 years. After April 9 elections split Parliament down the middle with 25 seats to both parties, when the lone independent lawmaker decided to side with FAST, it gave the party the narrowest of majorities, allowing it to form a government. HRPP cried foul and appealed for another seat to be appointed to the legislature; Saluavi obliged them, but the court struck the maneuver down.

Mata'afa described the locking of the parliament doors as a "bloodless coup.” Tuiliepa, in turn, called the swearing-in ceremony a “joke,” noting that “only the head of state, and no one else, can call parliament meetings and swear people in. None of what they did is legitimate.”

"This is treason, and the highest form of illegal conduct,” he added. “None of what they did is legitimate. The Devil has won and taken over them.”

Mata'afa is the daughter of Fiame Mataʻafa Faumuina Mulinuʻu II, the country’s first prime minister after winning independence from a joint UK-New Zealand administration. Her One True God Party (FAST) split from HRPP last summer amid growing criticisms of Tuilaepa’s rule, which began in 1998.

FAST’s rapid growth was fueled by a collapsing economy as COVID-19 travel restrictions severely impeded the country’s tourism and raw material export industries, which required the government to accept a $20 million loan from the Asian Development Bank in July of last year. They have also promised to repeal a set of unpopular laws passed in December giving significant powers over land ownership and legal proceedings to traditional courts that aren’t accountable to the Supreme Court. They also promised to scrap a proposed $100 million port expansion in Vaiusu Bay that would be heavily financed by China.