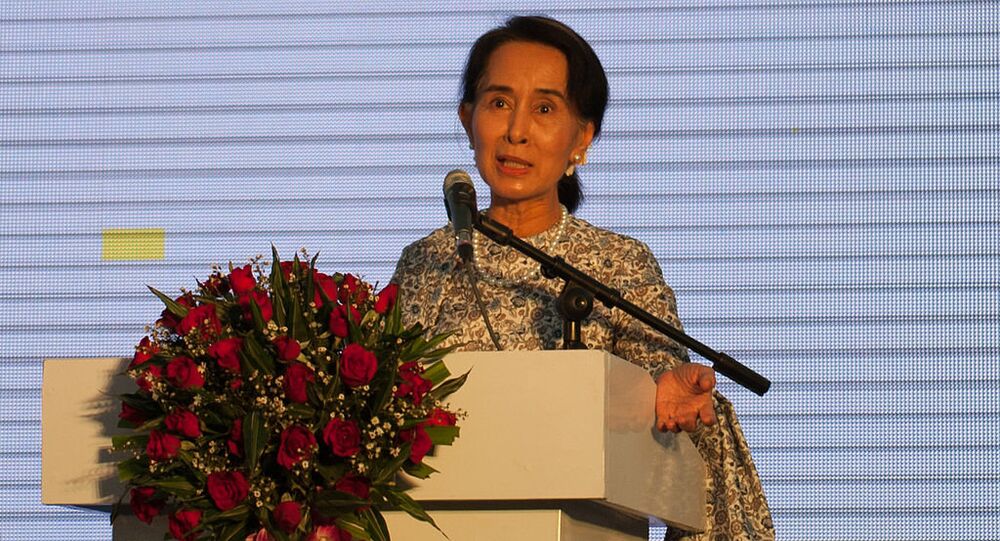 Earlier, the Myanmar military - Tatmadaw - seized control of the government after having accused the National League for Democracy (NLD) of committing voter fraud after the party managed to secure enough seats to form the country’s next government. On Friday, the junta-appointed election commission threatened to dissolve the party over the claims.

Civilian leader Aung San Suu Kyi made her very first public court appearance on Monday since the February 1 coup d'état saw her arrested and placed on house arrest. The detained official took the opportunity to voice that her party would continue as long as the public supports it.

Suu Kyi, who had previously appeared by video link, was determined to defend the integrity of her political party, a member of her legal team said, according to the New York Times. "Our party grew out of the people so it will exist as long as people support it," the Burmese leader said, one of her lawyers, Khin Maung Zaw, relayed to the outlet.

Courtroom photos show Suu Kyi sitting upright with her hands in her lap and wearing a surgical mask while inside the court dock. Alongside Suu Kyi are ousted President Win Myint and former Naypyitaw Mayor Dr. Myo Aung, as well as two police officers who are seend standing behind the defendants.

Suu Kyi’s lawyers have stated that she appears to be in good health after being able to speak with the Burmese official during a 30-minute special meeting. The legal proceeding was held in Myanmar’s capital of Naypyidaw, and was subsequently adjourned by the presiding judge until June 7.

The ousted leader has been held under house arrest for 16 weeks, since she was deposed in a pre-dawn raid that resulted in a charge of several violations, including illegally importing handheld radios and breaching COVID-19 rules, as well as allegedly taking bribes.

Suu Kyi was initially held at her villa in Naypyidaw after the raid, however, she was moved - blindfolded - to her current, undisclosed location a week later.

U Thein Hlaing Tun, the lawyer of her co-defendant Dr. Myo Aung was arrested Monday on incitement charges, according to a Twitter post by Burmese news company The Irrawaddy.

Since Suu Kyi’s arrest, many protesters and activists have taken to the street calling for the release of their chosen leader. In fact, a demonstration was held on Saturday outside of the Embassy of Myanmar in Washington, DC, by the National Unity Government of Myanmar (NUG), which formed in response to the February 1 coup.

Myanmar's military has largely cracked down on pro-democracy protesters since the coup, and is reported to have killed more than 800 people while detaining over 4,000 individuals, according to the monitoring group Assistance Association for Political Prisoners (AAPP).

The latest arrests included American journalist Danny Fenster, who was detained at Yangon International Airport on Monday as he tried to board a flight out of Myanmar, his news organization Frontier Myanmar said in a Twitter post on Monday.

Additionally, dozens of Myanmar security force members are reported to have been killed in an anti-junta movement that left 20 officers dead in the town of Moebyel in the Shan state. It is also estimated at least 10,000 people have fled their homes in Kayah, an eastern state in Myanmar that borders Thailand, after the latest violence.

"They fled into nearby forests or nearby villages where their relatives live. We don't have an organised group to help," said an unidentified activist according to Reuters.