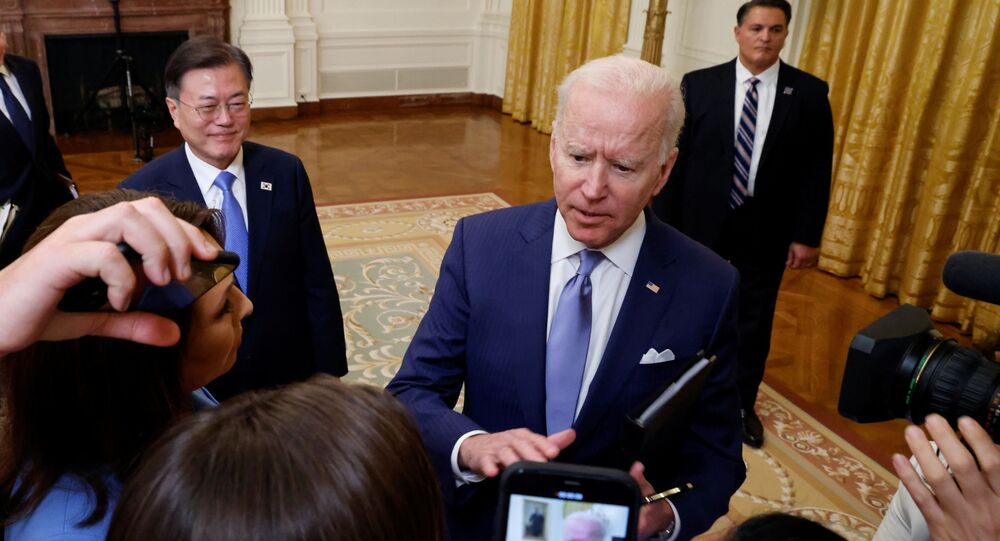 In a Friday press conference at the White House, US President Joe Biden and South Korean President Moon Jae-in announced a number of new joint initiatives, including their approach to the Democratic People’s Republic of Korea (DPRK), with which both nations are technically still at war.

"Our partnership is grounded on our ironclad commitment to shared security. Our alliance has long been the linchpin of peace, security, prosperity, and the region growing more prominent and us being together," Biden told reporters at the White House.

Biden said the two nations have a “shared approach” to the DPRK and that he is willing "to take pragmatic steps that will reduce tensions as we move toward our ultimate goal of denuclearization of the Korean Peninsula,” but said he would only agree to sit down with DPRK State Affairs Commission president Kim Jong Un if he agreed to denuclearization beforehand.

By contrast, Japanese Prime Minister Yoshihide Suga, a US ally in the region, said last month he is ready to meet with Kim without preconditions, continuing a policy set by his predecessor, Shinzo Abe. In addition, Biden said he is unopposed to an intra-Korean dialogue.

Biden announced that his administration’s new special envoy to Pyongyang will be Sung Kim, a longtime State Department diplomat who is presently the US ambassador to Indonesia, but had previously served as US ambassador to South Korea from 2011 until 2014. He has a long history of managing US relations with the DPRK, including both representing the US at the Six-Party Talks in Beijing and serving as US special representative for North Korea policy.

Moon said he expects a positive response from Pyongyang at the news of Kim’s appointment as envoy.

Moon told reporters their “urgent common task” is achieving complete denuclearization and lasting peace on the Korean peninsula. Although a ceasefire was signed in 1953, no permanent peace treaty was ever agreed to ending the conflict that started in 1950, so the US and South Korea still don’t have permanent diplomatic relations with the DPRK.

After months of bellicose posturing against Pyongyang early in his term, former US President Donald Trump changed his tone to a more conciliatory one, and in conjunction with Moon and Kim, helped usher in a level of rapprochement never seen before in the conflict. Trump and Kim sat down for three bilateral summits in 2018 and 2019 before talks broke down. Additionally, Kim and Moon signed an end-of-war declaration and took steps to normalize travel and trade that included visits between families divided by the tragic splitting of Korea into competing capitalist and socialist halves at the end of World War II, which helped create the two states.

The Trump-Kim talks collapsed after Trump proved unwilling to compromise on economic sanctions barring North Korea from trading in many items, including medical equipment, foodstuffs, and fuel such as coal, even as Kim demolished several key sites for the country’s nuclear program as a gesture of good faith. The isolated socialist country detonated its first nuclear device in 2006, and is believed to only have a handful of nuclear weapons, which the ruling Workers Party of Korea has said are necessary to guarantee the country’s safety so long as a state of war remains with the US and South Korea.

Similarly, relations between Seoul and Pyongyang soured once more after the Kim-Trump talks fell apart, South Korean forces resumed participation in military drills with the US, and the North began testing new short-range ballistic missiles.

Moon also mentioned that he and Biden had agreed to abolish US missile range guidelines, meaning that the US will no longer prevent Seoul from fielding ballistic missiles with a range of more than 497 miles. A memorandum of understanding with the US in 1979 intended to limit the spread of ballistic missile technology allowed Seoul to develop short-range weapons, but then-US President Barack Obama doubled the limit in 2012 and in 2017, Trump removed the corresponding payload limit entirely, allowing for much more destructive weapons to be fielded.

However, the message is aimed at Beijing, not Pyongyang, since the furthest point in North Korea is just 315 miles from South Korean territory. Moon also mentioned on Friday that he would be cooperating with Biden on security matters related to Taiwan.

Moon also said the US and South Korea would establish a “comprehensive partnership” on COVID-19 vaccines to "boost vaccine supply, so that we can accelerate the rollout of vaccines to the entire world, especially in the Indo-Pacific region."

“The US has the ability to develop vaccines and Korean companies have the capacity to produce biomedicines," he explained.